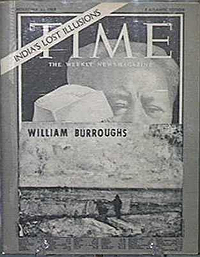 New York: “C” Press 1965, Maynard & Miles A11a. A signed hardcover issue lettered A-J each accompanied by a manuscript page from Burroughs and a drawing by Brion Gysin. Illustrated with four calligrams by Gysin. The top half of the cover appears to be an issue of Time magazine and features portraits of Nehru and Mao, reproduced as a part of a collage by WSB. Indeed, the November 30, 1962 issue of Time magazine, with the title “India’s Lost Illusions,” was apparently chosen by Burroughs for parody because that issue includes a savage review of Naked Lunch, as well as Burroughs’ other Olympia Press works, in which Burroughs and other Beat writers are put down as frauds.

_____ limited edition of 100 numbered copies signed by Burroughs and Brion Gysin, in wraps as issued.