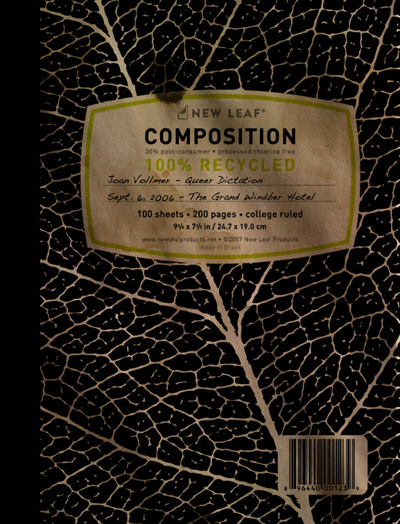 Handwritten trance-writing of what is conjectured to be Joan Vollmer’s notations to the preface of Queer as channeled through Blair Murphy on September 8, 2006 in Windber Pennsylvania. Location: A bookshelf in Blair Murphy’s room at the Grand Winder Hotel along with an accompanying 8mm film documenting the proceedings and a notebook contain a transcription of Vollmer/Murphy’s holograph notations.

Writing in one’s books can be a means of communing with the dead. Literary table-tapping. It is also a form of ghost writing. In the preface to Queer, William Burroughs suggested that the discovery of his literary voice was made possible through the silencing of Joan Vollmer’s.

This struck the attendees of the 2006 Kerouac Fest as a great injustice. Drawing on the trance/sleep writing exercises of Robert Desnos in 1920s Surrealist circles, an attempt was made to channel the spirit of Joan Vollmer to see if she had any commentary on the preface. Blair Murphy, host of the Kerouac Fest, was considered a worthy vessel and was selected as the medium. At dawn on September 8, 2006, with the assistance of Adam Blai, at the time a Psychology Ph.D candidate at Penn State University and to this day an expert on demonology and the paranormal, Murphy was seated on the makeshift stage in the main room on the first floor and a copy of the 1985 Viking edition of Queer was placed before him. His hand held a marble Parker fountain pen with red ink. Within 10 minutes, Murphy fell into a deep sleep.

In a further 15 minutes punctuated by incoherent mumbling and spasmatic jerks, Murphy straightened ram-rod still in his chair, his eyes wide and dilated. He stared unseeing into the audience and began furiously writing not just in the margins but on the text in a child-like, yet shockingly legible, feminine script, decidedly not his own. At times, during which Murphy’s arm twitched as if possessed, the writing devolved into mere scribbles. A comparison could be made to Burroughs’ script in the lost notebook edited by Oliver Harris.

After 5 minutes of continuous — in some cases frenzied — writing, Murphy slumped into a faint. He came to with no recollection of what he had written, but with the distinct feeling that the writing passed through him and “came like dictation.”

Exhausted by the experience, Murphy fell asleep for 6 hours. On awaking, a workshop was held around the kitchen table, during which the trance writing of Vollmer/Murphy was transcribed into a black and white Composition notebook. The final transcription, when lightly edited, was part deathbed confessional, part literary criticism, part lover’s lament, part witty, albeit dry, conversation. A re-write in the manner of The Last Words of Dutch Schultz. Some key phrases included: “Wife, mother, acts of labor, the Job.” “Marginalia = minor characters.” The haunting phrase “It was a hard way to live forever” was written repeatedly.

Written by Jed Birmingham and published by RealityStudio on 31 October 2012.
Joan Vollmer