Stop me if you’ve heard this one before. It seems everything I come across of late ties into the saga I’ve been documenting in the Bunker.

The terminology involved in book collecting can be quite slippery. Even terms as basic as first edition prove hard to get a firm grasp on. The category of ephemera is another one. I feel that I know it when I see it (like on ebay). Ephemera are generally outside the core categories of my William Burroughs collection; that is books, magazines, and vinyl. Ephemera are the paper stuff that falls between the cracks of many book collections. In an article for AB Bookman’s Weekly, John Dann wrote, “There is no exact catalogue of ephemera’s subject matter, but included under the broad umbrella are trade cards, letterheads, die cuts, postcards, broadsides, tickets, menus, timetables, posters, advertising materials of all sorts, rewards of merit, labels, political buttons, and programs. Much of ‘ephemera’ was originally a by-product of exuberant capitalism-largely advertising material made possible by advances in printing technology.” Yet thousands of collectors scour the nooks and crannies for just this “stuff.” Not surprisingly, they have formed several organizations. The Ephemera Society of America is one. 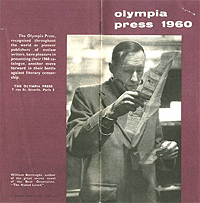 I have touched on the joys of ephemera in the Bunker. Broadsides are major pieces of collectible paper. Over the years, I have come in contact with the more disposable elements of paper culture. In acquiring my Fuck You Archive, the bookseller threw in a few pieces of ephemera to sweeten the deal. That they were throw-ins highlights the fact that many booksellers and collectors think of ephemera as a collecting third world. Yet this material is often very interesting, very informative, and a pleasure to own. The checks from the Phoenix Bookshop and the Herbert Huncke 80th birthday card are just plain cool. These items tell a story. The News Flash printed on the Fuck You Press mimeo is another great example. This handbill provides a look into the events of the Lower East Side scene announcing the opening of Peace Eye Bookstore and the first gig of the Fugs. These addresses, dates and descriptions are valuable primary material.

After some confusion with addresses and billing, I received a copy of the 1960 Olympia Press Catalog. It is disposable and published for commercial / advertising purposes: the epitome of ephemera. Pieces like this fall through the cracks. I had never seen an Olympia Press Catalog before, let alone one with such a relation to William Burroughs and Naked Lunch. The Catalog features several photographs of Burroughs and reprints the dust jacket blurb to the Olympia Press version of Naked Lunch.

The catalog blurb straddles the fence between high art and pornography in describing its contents. On one level, the text makes clear that Naked Lunch is different from the normal fare of Olympia Press. The catalog quotes extensively from John Ciardi, a noted critic and poet of the 1950s who wrote on Naked Lunch in the Saturday Review in an essay titled “The Book Burners and Sweet Sixteen.” Quoting Ciardi, the catalog states, “As in Kerouac’s blurb, the writing does, to be sure, contain a number of four-letter words, but the simple fact is that such obscenities — if obscenities they are — are inseparable from the total fabric and effect of the moral message. No less a writer than Dante made it a principle of harmonious style deliberately to coarsen the writing when dealing with debased characters as his subject matter.” The book is described as “a masterpiece of its own genre” and continues that “Burroughs is not only serious in his intent, but he is a writer of great power and artistic integrity engaged in a profoundly meaningful search for true values.” Dante? Artistic integrity? Moral message? True values? Clearly, such descriptions would not appeal to the core audience of Olympia Press. 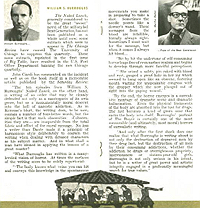 Instead, Girodias was banking on the hype surrounding the Big Table trial to sell the book to a crossover audience of readers interested in daring, frank, and explicit literature, like Lolita and The Tropic of Cancer. In fact, Ciardi’s article was occasioned by the Big Table trial. Ciardi would be one of the primary witnesses for the defense in the Boston Naked Lunch trial. The catalog refers to the Chicago controversy highlighting the obscenity issues surrounding the book as well as its forbidden nature. The blurb states, “The Naked Lunch generally considered to be the great ‘secret’ novel of the self-styled Beat Generation, has not been published as a whole until now: some extracts which were to appear in The Chicago Review have caused the University of Chicago to suppress this quarterly. These same extracts, reprinted in the first issue of Big Table, have resulted in the U.S. Post Office Department banning the new Chicago quarterly.” Even at the beginning when Burroughs was a largely unknown author, there was a buzz around Naked Lunch. The Olympia Press edition was desirable from the start to a whole group of readers who did not normally purchase the press’s more fleshy wares.

Girodias did not want to alienate his hardcore audience as well as other less literary thrill seekers. The dust jacket quotes a particularly sensationalistic section of Naked Lunch that Ciardi felt compelled to explain: “She seized a safety pin caked with blood and rust, gouged a great hole in her leg which seemed to hang open like an obscene, festering mouth waiting for unspeakable congress with the dropper which she now plunged out of sight into the gaping wound.” The jacket also mentions “the lust for drugs,” “sixteen year old girls,” and “green ooze.” These lines conjure up appropriate images of sex and drugs. This scene appeared in the Autumn 1958 Chicago Review and was reprinted as “Episode 5” in the first issue of Big Table. Clearly, this scene struck a chord with readers, publishers and critics. The young girl in trouble was a theme familiar to Olympia Press readers and drug addiction always fascinated the square public with its scenes of lawlessness and squalor. Girodias knew that many readers would seek out Naked Lunch looking for more descriptions of women, sex, and drugs.

As I have shown elsewhere, this mixture of high and low art pervaded Burroughs’ publication history throughout the 1950s and continued to a lesser degree throughout his career. The description of the women and the safety pin in the catalog relates directly to the marketing of Burroughs’s previous novel Junkie. The cover of the Ace Junkie featured a young woman wrestling with a man over a loaded hypodermic needle. The 1957 Digit edition of Junkie displayed a young woman in a short skirt about to inject into her exposed thigh.

Clearly, Burroughs was the new, hot property of Olympia Press in 1960. His photograph is on the front and back cover. The back cover refers again to the “great secret novel of the Beat Generation.” The photograph of Burroughs proves very interesting as it depicts his obsession with cut-ups that began after the publication of Naked Lunch. I think the image of Burroughs peering at scraps of newsprint is an iconic picture for the 1960s trajectory of his literary career: the cut-up novels, like the soon-to-be-published Soft Machine; the three-column format; Time; APO-33; the little magazine experiments.

Norman Rubington’s Fuzz Against Junk has ties to Burroughs and Naked Lunch. Many people believed that Burroughs was Akbar del Piombo, the pseudonymous writer of the collage novel. In fact, William Reese Booksellers felt compelled to dispel this rumor in their 1993 catalog that featured a library of Olympia Press titles for sale. The book is a parody of 1950s Beat and Drug literature, particularly of the Beatnik phenomenon. The drug culture of Burroughs becomes the fodder for laughs. The book’s use of photomontage harkens back to the Dadaists and Surrealists, particularly the work of Max Ernst, but Fuzz also conjures up images of Burroughs’s textual / visual work in his 1950s notebooks and onward into the 1960s.

On the whole, the catalog presents the more literary, high-minded side of Olympia Press. The catalog features literary giants like Nabokov, Sade, Beckett, Apollinaire, Henry Miller, Jean Genet, Lawrence Durrell. The catalog states, “The Olympia Press, recognized throughout the world as pioneer publishers of outlaw writers, have pleasure in presenting their 1960s catalogue, another move forward in their battle against literary censorship.” The censorship laws of France were not the only target. The United Kingdom and the United States were also under assault. This battle is illustrated by the “fragments from the Bayeux Tapestry depicting the invasion of England by William the Conqueror” that appear throughout the catalog. Like the Normans in 1066, Maurice Girodias invaded England’s borders from Parisian bookshops, as thousands of his dirty books slipped through customs in the suitcases of British tourists. 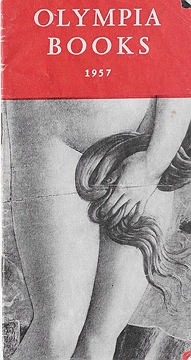 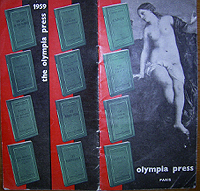 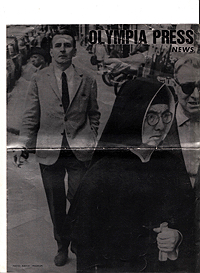 Written by Jed Birmingham and published by RealityStudio on 12 October 2006. Thank you to BigTable for the scans of the 1959 catalog.
Collecting Henry Miller Naked Lunch Olympia Press William Burroughs