The 1960s began in Britain exactly forty-five years ago on 11 June 1965. The International Poetry Incarnation at Royal Albert Hall featured Alexander Trocchi, Harry Fainlight, Allen Ginsberg, Lawrence Ferlinghetti, Gregory Corso, Anselm Hollo, Simon Vinkenoog and host of others. The disembodied voice of William Burroughs via tape recording filtered through the hall as well. Here is the program for the event, which was handed out as one entered the hall, and a handbill announcing the reading. It was probably mimeo’d by Bob Cobbing at Better Books.

Lawrence Ferlinghetti read To Fuck Is To Love Again and brought down the house. Fuck You Press printed this poem in a standalone edition. Long Hair and Residu were two little magazines that captured the literary scene on display at Royal Albert Hall. Long Hair reflected the Better Books / Indica Bookshop community and was edited by Barry Miles. Residu was edited by Royal Albert Hall attendee Daniel Richter. 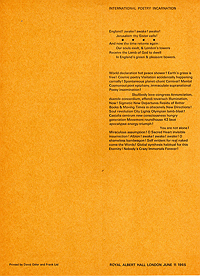 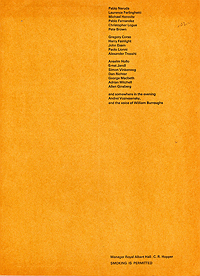 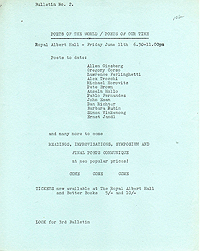 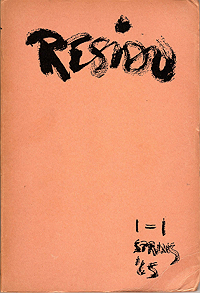 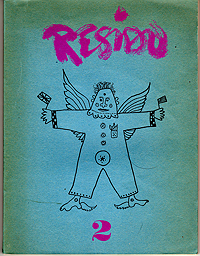 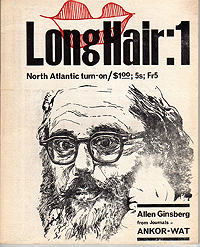 Lawrence Ferlinghetti
To Fuck Is to Love Again