After going to see the Villa Seurat, where Henry Miller lived when he wrote Tropic of Cancer, we stopped at the Café Zeyer for drinks. The Zeyer, which he described as “a gaudy place with red plush and mirrors and polished brass,” was where Miller often took a fine à l’eau and argued metaphysics with friends. It was a burning hot day in Paris. Carl Weissner ordered beer. His close friend Jan Herman, publisher of San Francisco Earthquake and the Nova Broadcast Press, ordered a kir, as did his wife Janet. “Tell Carl the story about Buk,” I urged.

The previous night Janet had told me about the time Jan took her to meet Charles Bukowski in Los Angeles. They brought a bottle, on Carl’s advice, and ended up finishing it. When they were taking their leave, Buk moved to kiss the young and fetching Janet — and promptly shoved his alcoholic old tongue down her throat. She was disgusted, but it made for a great story a few decades later. “You should have challenged him to a duel on the beach — with sabers,” Carl growled, rubbing his hands together with a glee suggesting that he was really visualizing this oceanside face-off.

Carl, born in Germany during World War II, once joked to me that his greatest ambition was to become an American writer. In a way, he has fulfilled that ambition vicariously. His definitive translations of Bukowski, William S. Burroughs, Bob Dylan, Nelson Algren, and others have sold literally millions of copies in Germany. “It was Carl,” Jan once told me, “who really turned Bukowski into something. It was Carl who got him major notice in Der Spiegel. That set off the craze in Germany and boomeranged back here. Bukowski never became a mainstream success till that happened.”

Bukowski made no secret of his gratitude to Carl, not just for his translations but for something much more important — understanding, support, friendship. Buk told one interviewer:

[Weissner’s] letters were quite incisive, entertaining (lively as hell), and he bucked up my struggle in the darkness, no end. A letter from Carl always was and still is an infusion of life and hope and easy wisdom. I was in the post office at the time and living with a crazy and alcoholic woman and writing anyhow. All our money went for booze. We lived in rags and a rage of despair. I remember I didn’t even have money for shoes. The nails from my old shoes dug into my feet as I walked my routes hungover and mad. We drank all night and I had to get up at 5 a.m. When I wrote, the poems came out of this and the letters from Carl were the only good magic about.

Presumably William Burroughs must have felt the same. In 1966 Burroughs traveled from Paris to Heidelberg to meet Carl. They had been corresponding and publishing cut-ups in the same little mags. “I opened the door,” Carl wrote in a letter later published by Victor Bockris in With William Burroughs: A Report from the Bunker, “and for a fraction of a second before the hall light went out I caught a glimpse of a tall thin man, about 52 years of age, black suit black tie white shirt w/ black needle stripes black phosphorescent eyes black hat. He looked like Opium Jones.” If Carl thought Burroughs’ apparition was dreamlike, perhaps the feeling was mutual. Years later, after Carl had translated some dozen of his books, Burroughs recorded a dream in My Education that may have harked back to that first meeting: “With Carl Weissner in Germany. I ask him: ‘Just where are we? Germany? Belgium?'”

In the five years after their initial meeting, the writers would intersect in a number of book projects and little mags, including Weissner’s own Klacto. In 1967, Beach Books in San Francisco published So Who Owns Death TV?, a pamphlet containing cut-ups by Burroughs, Weissner, and Claude Pélieu. Herman’s Nova Broadcast Press would publish Burroughs’ The Dead Star in 1969; The Louis Project, containing texts by Weissner and Herman, in 1970; and Weissner’s book of cut-ups, The Braille Film, which contained a “counterscript” by Burroughs, in 1970. In 1972 Agentzia in Paris would publish Cut Up or Shut Up, a compilation of cut-ups by Weissner, Herman, and Jürgen Ploog, with a “tickertape” by Burroughs running across the top of the pages.

Braille Film is the most significant of these books. The title hinted at either a synesthesia (touch compounded with sight) or an absurdity (touch compounded with sight?) that has since become less inconceivable owing to the invention of touchscreens. Doubtless Weissner also intended an assault on every sense possible. The density of the imagery in Braille Film is a key component of the book’s impact. “Weissner,” Jed Birmingham has written, “is one of the foremost practitioners of the cut-up, and when Burroughs scaled back the technique Weissner pushed it forward.” Just as Burroughs was turning to more narrative texts such as The Wild Boys (1971), Weissner emitted this bombshell of relentless images and standout lines. “Dead tissue fades in the searchlights” … “The white labyrinth of silence has no emergency exits” … “I watched him masturbate in the halflight. (Looks like he’s counting money.).” … “The thoughtographs went up in silver dust.”

Though the cut-up technique gradually made its way into popular culture — most notably when David Bowie used the method to produce song lyrics — it was not for experimentation but for translation that Weissner won acclaim in the 1970s. He once explained to me that, of all the books he’d translated, Nova Express was the most difficult. Consider a random phrase, “so the Venusian Gook Rot flashed round the world.” Venusian gook rot? It takes a unique sensibility to translate that. In an essay included in Naked Lunch@50: Anniversary Essays, Ploog describes how Weissner achieved that sensibility. “Weissner,” Ploog writes, “had hung out in jazz joints in Heidelberg frequented by GIs, and he’d spent considerable time in the States. He was the man to get the rude and loose intonation across. Where the Behrens [previous translators of Naked Lunch] had to say ‘opiates,’ Weissner was able to go straight to ‘junk.'” In his Memoirs of a Bastard Angel, old friend Harold Norse pronounced Weissner “the best German translator of the Beats and raw-meat writers.”

Although the renown from his translations enabled Weissner to write for mainstream magazines such as Rolling Stone, literary experimentation never ceased to form an important part of his repertoire. From 1973 to 1986 he co-edited, with Ploog and Jörg Fauser, the little mag Gasolin 23, which published his own work alongside that of Burroughs, Bukowski, et al. In more recent times, Weissner has been working on two novels and further experiments. The latest of these is Death in Paris.

This new text clearly references its namesake, Death in Venice: Thomas Mann’s narrative moves from Munich to Venice, Weissner’s non-narrative from San Francisco to Paris; the cholera plague in Venice becomes a spree of random violence in Paris; Mann’s protagonist, a world-weary writer, becomes Weissner’s cynical but sharp-eyed littérateur; etc. Each text is the story of a man, a city, and a love interest — except that Mann’s hero obsesses over a young man, while Weissner’s anti-hero prefers death, particularly its homicidal forms.

Death in Paris, however, is no simple rewrite of Death in Venice. Weissner does not do the Hollywood remake, “updating the story for today” or some such. What he does to Death in Venice is what a terrorist does when tossing an improvised explosive device into a crowd. He sews chaos, inflicts violence, and, most important, makes a statement. In that sense, the m.o. is creation through destruction — except that to say as much of Death in Paris runs the risk of diminishing the text’s real creativity, its black humor, wisdom, and vitality. Is there a bad metaphor in the thing? I read it (for the sixth time now) and think to myself, “How can a foreigner write like this in English?” Or more simply: how can anyone write like this? Jesus.

RealityStudio is truly thrilled to be able to present this previously unpublished text by Carl Weissner. Death in Paris is available in its entirety to read online or to print. Doubtless it will help to put La Louisiane, the Paris hotel which figures so prominently in the text and where much of it may have been written, alongside the Villa Seurat and so many other places on the literary map of Paris. 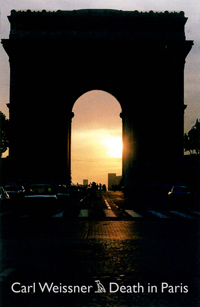 An Archive Celebrating Carl Weissner’s Publications in the Avant-Garde

6 thoughts on “Death in Paris”