Several years ago, I wrote on the potential joys of collecting Charles Olson. Olson loomed as a literal giant over the small press and little magazine scene from 1950 until his death in 1970. As a result, his work appeared in some of the most interesting chapbooks and magazines of the period. His books are beautiful and expansive (I am thinking of the Jargon Press Maximus Poems) as objects above and beyond the epic scope of their contents.

Leroi Jones (later Amiri Baraka, but Jones for the purposes of this column) appeals to me in a way similar to Olson and, of course, William Burroughs. My interest in Jones centers on his Beat phase lasting until the mid 1960s. This work would make an outstanding collection. In 2000, Brown University showcased its Jones holdings and the Beat pieces really spoke to me. I was especially struck by Jones’ work as an editor. It seems like he had his hands in every major magazine coming out of New York City in the late 1950s and early 1960s. Yugen, Floating Bear, Kulchur. This does not include his founding of Totem Press and that press’s publications with Cornith Books. Jones published Michael McClure, Allen Ginsberg, Jack Kerouac, Frank O’Hara, Charles Olson, Gary Snyder, Philip Whalen, Ed Dorn, Diane Di Prima, and Paul Blackburn. 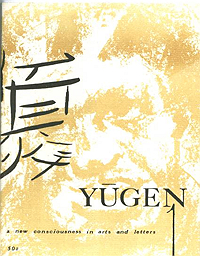 I am going to focus here on Yugen. Yugen ran for eight issues from 1958-1962. The magazine filled a void for newly emerging schools of poets that were denied publication in the academic and mainstream venues, like Poetry or The Kenyon Review. Jones stated, “It was started because I didn’t see publications coming out that carried poetry or writing that I was interested in. Therefore, I thought I should start one to try to gather that poetry that I thought was interesting… I just thought nothing was happening on the poetry scene as it should be so I started publishing.”

Yugen is often described as a Beat outlet. Work by Allen Ginsberg, William Burroughs, Gregory Corso, Jack Kerouac, Gary Snyder and Philip Whalen definitely appears frequently, but I think the content is much broader than that. Yugen billed itself as a “new consciousness in arts and letters.” The poetry dovetailed with the groundbreaking and monumental New American Poetry anthology of Don Allen published in 1959/1960. Jones included the New York School (Frank O’Hara, Kenneth Koch), Black Mountain (Charles Olson, Robert Creeley, Joel Oppenheimer, Fielding Dawson), and San Francisco Renaissance (Robin Blaser) poets alongside a healthy helping of the Beats. The Black Mountain poets made a very strong showing. In the last issue, the table of contents reads like a who’s who of New American Poets. By 1962, Yugen‘s work was done. On ending the magazine, Jones stated, “Well, I think it just outlived its usefulness as far as I was concerned. By the time Yugen stopped publishing there were innumerable magazines that were publishing poets and writers that I had some respect for.” 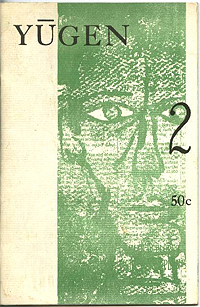 Much of the work of constructing Yugen was done by Jones’ wife, Hettie Cohen. Cohen worked as an editor as Partisan Review which gave her invaluable experience in putting together a magazine. She performed many editorial tasks as well as designing the layout. Like with many magazines of the period, the construction process, such as collating, folding, mailing, and stapling, provided a center for the literary community. Collating parties became literary events. Hettie Cohen’s How I Became Hettie Jones is mandatory reading on the literary community in New York City in the late 1950s, early 1960s, as is Diane Di Prima’s Recollections of My Life as a Woman. Both books provide detailed accounts of the day-to-day process of running a literary magazine. I highly recommend them.

Yugen was printed by Troubador Press in New York City. All eight issues have a similar design and feel. They are simple yet handsome chapbooks, much like the small books published by Jones’ Totem Press, like O’Hara’s Second Avenue and Kerouac’s The Scripture of the Golden Eternity. The defining characteristic of a Jones chapbook was arresting cover art drawn by an artist closely affiliated with the literary scene. The artwork for Yugen possessed a strong Black Mountain feel with illustrations by Basil King and Norman Bluhm. The covers contained elements of Eastern calligraphy and the brushwork of the abstract expressionists like Franz Kline. Yugen shows how printing cheaply does not have to detract from richness of design. All Jones productions of this period appeal to me as objects saying nothing of the appeal of the writing within. Highpoints include Kerouac’s “Rimbaud” in Issue 6 as well as defining work by Charles Olson. While all the work is not of a high quality (it is uneven like most little magazines), the sense of a newly emerging literary community shines through. Yugen captures a snapshot of alternative poetics as the New American Poetry anthology broke things open. 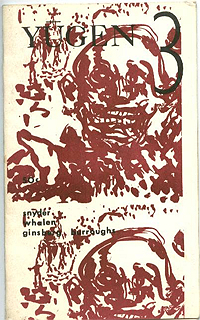 William Burroughs appeared in two issues of Yugen: Issue 3 and Issue 8. These appearances highlight a change that occurred in Burroughs as a writer between the late 1950s and early 1960s. In issue three, Burroughs submitted “Have You Seen Pantapon Rose?,” an early piece of the still gestating Naked Lunch. Issue eight features an essay: “The Cut Up Method of Brion Gysin.” In 1958, Burroughs was still searching for himself as a writer and unsure of both his work and his method. As I have mentioned before, Yugen proved instrumental in giving Burroughs confidence as a writer, providing publication at a crucial time in Burroughs’ development. Burroughs’ collaborator at the time was Allen Ginsberg. Burroughs’ letters containing routines were addressed to him. Oliver Harris details letter writing as a key to Burroughs’ method in William Burroughs and the Secret of Fascination.

By 1962, Burroughs was a completely different man and writer. Burroughs discovered the cut-up which replaced the routine as his major literary technique. Similarly, Gysin replaced Ginsberg as the major collaborator and confidante. The effects of the change can be seen in Burroughs’ essay on Gysin and the cut-up. Burroughs writes an authoritative essay featuring a cut up, not a routine. He has become a spokesman on writing technique and history. His belief in his style is absolute. Everything is a cut-up and all literature can be subjected to the cut-up. “ALL WRITING IS IN FACT CUT-UPS OF GAMES AND ECONOMIC BEHAVIOR OVERHEARD?” Burroughs’ voice is more confident and strident. Burroughs speaks from the mountain top; he has seen the light. You get the sense of a power shift between issues three and eight. In issue three, Burroughs benefits tremendously by appearing in Yugen. In issue eight, Yugen benefits tremendously by featuring Burroughs. Between the two issues, Burroughs went from literary unknown to an international cult figure. 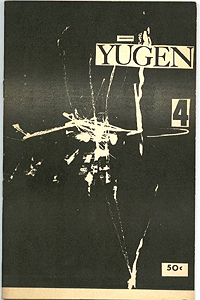 To this day, Yugen remains fresh and vibrant, like the New American Poetry it featured. Putting together a complete run of Yugen is tough but not impossible. Issue four marks a turning point in the magazine’s availability on the collector’s market. Issues 1-4 are tough to find and are expensive, roughly $100-150 per issue. Issues 5-8 are much more common and cheaper. The later issues provide a good bang for the buck. Issue 6 includes Kerouac’s “Rimbaud” before it was published as a broadside by City Lights. Of course, issue 8 has the early Burroughs appearance. Visually and textually they are worth the $35-50 price tag. For anyone interested in the Beats and modern poetry in general, Yugen is a fun purchase. Truly, Yugen was a laboratory in which poets of the post-WWII era experimented before their work became accepted as mainstream. 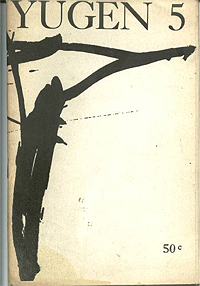 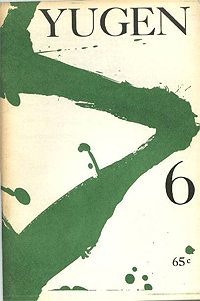 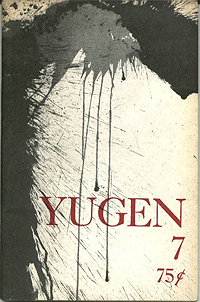 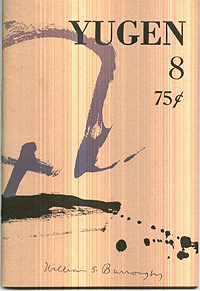