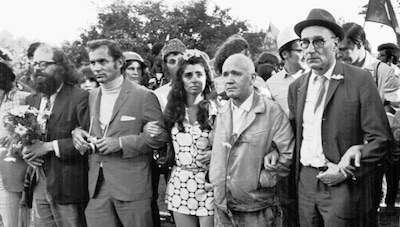 In the last few years there has been a trend in book-collecting circles of getting away from traditional books in favor of ephemeral documents like photographs and photo albums. Booksellers at the forefront like Between the Covers — you might remember that they changed the game in the sale of Mimeo Revolution collectibles years ago — and Brian Cassidy are going to fairs and seeking out your uncle’s old photo album of his platoon in Vietnam or your Grandparents’ pics of a family vacation driving along Route 66 in the 1950s. As time passes, old photographs taken by amateurs, such as those on a vacation, are becoming important historical documents valued by individual collectors and institutions.

This intersection of vacation time and experiencing a historical moment makes me think of Burroughs in Chicago in 1968. Wish you were here, All the best, Bill. It is a cliché to discuss the Democratic Convention of 1968 in terms of absurdist theater. Chicago challenged Gil Scott-Heron’s assertion that the revolution will not be televised, just as Vietnam demonstrated that war was a form of entertainment, even if it was a horror show. But what about thinking of Chicago as a vacation destination? In the summer of 1968, Burroughs was looking for an escape from London when the Esquire assignment to cover the Democratic Convention with his idol Jean Genet and his old buddy Terry Southern fell into his lap. Burroughs gladly accepted. Sounds like fun. For Burroughs, Chicago was a vacation to a Westworld-style amusement park for those playing at the Revolution. It also had elements of a bachelor party where simulations of war, like paintball and laser tag, are offered as amusement.

The city was crawling with photographers and TV camera crews and Burroughs’ trip to Chicago was well-documented by Esquire photographers. Seemingly there are as many shots of Burroughs in Chicago as there are of Burroughs in any other city. You have all seen the photos. One of the most famous is of Burroughs with comrade-in–arms Jean Genet marching in the streets of Chicago along with Richard and Jeanette Seaver and Allen Ginsberg. This is the photo which makes me think of Westworld. This is the essence of the simulated Revolution. Fighting in the street as a walk in the park. In particular, Jeanette and Richard look dressed to kill. Jeanette as Baby Jane Holzer watching the Plastic Exploding Inevitable at the Dom. 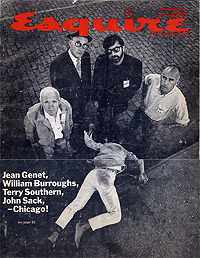 1968 Chicago is textbook theory of the spectacle and hyperreality. Simulacra and simulation. Case in point, the most famous photo of Burroughs in Chicago, the cover of the November 1968 issue of Esquire featuring Burroughs’ article “The Coming of the Purple Better One,” did not take place in Chicago at all. It was staged in the safety of New York City. Genet in particular was offended by this display of fake news and demanded more money for the photoshoot. Storm the Reality Studio!!!

There are a few photographs of Burroughs on stage in Grant Park addressing the crowd and in one he flashes the peace sign. For me this is the most fascinating photo of Burroughs in Chicago. It is easy to be cynical and dismiss this pic as a joke and say that Burroughs saw through all this shit and was just along for the free ride. But it is also easy to forget that the violence in Chicago was very real and that the feeling the United States teetered on the edge of revolution was palpable. I love this pic because I think it captures Burroughs being caught up in the moment and losing himself in the revolution. This is Burroughs as true believer. It is pictures like this one which place The Job and The Electronic Revolution in context. In fact, it could be a cover image for those books. Burroughs to Gysin from September 9, 1968: 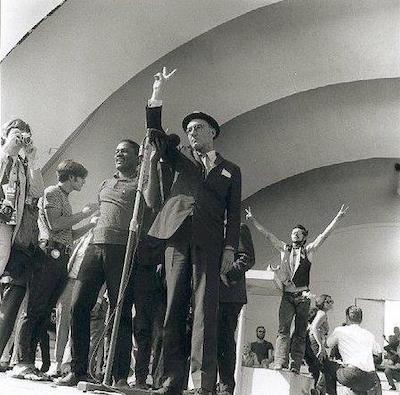 You were right when you said I might not want to leave America. The place has changed unrecognizably since we were last here. There is real resistance among both black and whites on a scale and organization I have not seen anywhere else. In Chicago I was addressing rallies and taking part in marches and its fun.

Like pot, the revolution was fun. And real. Burroughs to Gysin from September 28:

Point of images is to bring some real, I mean real, thing on set where it isn’t now. What is really going on here is resistance like I have not seen before. I tell these kids about infra sound and DOR and they are on the way to build these machines right now and intend to use them. The gap between idea and action has really been bridged at last. So I feel one should follow through on it.

Seeing Burroughs on stage giving the salute of the Revolution you wonder what music was playing in the background. The MC5 rocking through “Dancing in the Streets” or maybe the newly released Rolling Stones tune “Street Fighting Man.” Maybe so but the photo also suggests a song from the near future: The Who’s “Won’t Get Fooled Again.” Surely Burroughs would never be this naive again, but he would also never be this young again either.