#13: The Olympia Press The Naked Lunch (1959). An Installment in Jed Birmingham’s series of the The Top 23 Most Interesting Burroughs Collectibles. 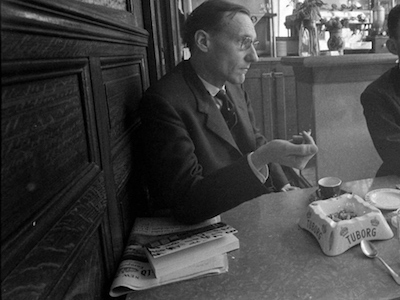 I call my mom several times a week, not so much because I am dying to talk to her, but more because I can count on her to answer the phone at all times. You see, I am not a Facebook or Twitter guy; I use limited texting and brief emails. No, when I want to reach out and touch someone, I still use Ma Bell. Often as the night progresses and the supply of Natty Boh (and me along with it) slips into oblivion, I feel the urge to rap about Burroughs and book collecting. In such times of need, I go through my progressions dialing all the book dealers, collectors and scouts that are saved on my phone. And inevitably the phone rings and rings as nobody wants to hear me rant on about how Jeff Nuttall is the most interesting collaborator of Burroughs’ career for the thousandth time. So I dial 555-2323 and rest assured I will soon be serenaded by my Mom’s sing-song “hello.” 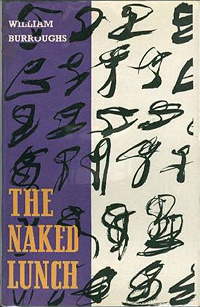 I got a hold of her recently, after I had yet again unsuccessfully attempted to reach any book dealer or collector in the continental United States in order to hash over this Burroughs list. I asked her, “What is the most interesting Burroughs collectible?” and she responded without hesitation, “You have to consider the Olympia Naked Lunch.” And there you have it: the book that once offended an entire generation has become your mom’s Burroughs collectible. The general public knows one Burroughs book if they know one at all and a smaller subset of that public knows only one Burroughs collectible. Naked Lunch has become something of an old grey lady of American literature, your eccentric grandmother to be sure, but what I am saying is that the book has become respected and even seems to be inching towards respectability. When I stop in at the Hudson Booksellers in Union Station on my commute home from a day at the mines, Naked Lunch: The Restored Text jockeys for attention next to the latest James Patterson or Jonathan Franzen title. Young, good looking, crew cut, Ivy League, advertising exec type fruits now read the novel on the subway pulling away from Washington Square Station. Time magazine, which in 1962 blasted Naked Lunch as a sick novel, listed it as one of the most important novels of the American Century.

In book-collecting circles, the Olympia Naked Lunch is a mainstay of any respectable modern first dealer’s stock. It sits alongside Ellison’s Invisible Man, Kerouac’s On the Road, Harper Lee’s To Kill A Mockingbird and Salinger’s The Catcher in the Rye as a blue-chip collectible. These are the book’s peers but the Olympia also has nothing to be ashamed of sitting in a display case (as it often does) with A Sun Also Rises, The Great Gatsby and The Sound and the Fury. Walk around the ABAA Bookfair in New York City in April and you cannot swing a dead Ruski without hitting an Olympia Naked Lunch. As a Burroughs collector it is the one Burroughs book you absolutely must have in order to be considered a serious player in the game. Even if Burroughs is not your bag and you find yourself in the ever shrinking group that still finds reading the book as embarrassing as being caught holding Steely Dan III from Yokohoma, as time goes on and you want to collect highspots of American Literature, the book’s reputation has become such that it is mandatory in that regard as well.

Briefly on the topic of mothers. In podcasts and posts, I have talked a bit about the influence of my father on my book collecting. His shadow definitely looms over my library, but this is not to downplay my mother’s role. She is in my collecting DNA as well; in that regard, like Burroughs, I am a momma’s boy. She specialized in frogs and wishbones. Both collections were stored in bathrooms. This is collecting as home decorating. The frogs and wishbones do not so much fill a personal desire as a personal space, or in the case of the bathroom, they personalize a utilitarian space. But my mother expressed desire though collecting/gathering as expressed through consumer purchases. For example, there was the time she tried to buy every last softshell crab in Reading, Pennsylvania, because she was craving them. Another time she cornered the market on Aqua-Net hairspray because she heard it was going to be discontinued. Compulsion and obsession. The cornerstones of collecting.

When my brother and I graduated high school, my mom wanted to continue an interest in high school tennis. In an effort to get more involved, she took the exam required to umpire official tennis matches and proceeded to officiate on the local level in high school and college matches. In the matter of a few years, she was officiating at the U.S. Open in New York, as well as doing matches for the likes of Jimmy Connors, John McEnroe and the Williams sisters. My mom puts hard work and dedication into her all avocations. Did I mention she does 500 crunches a night? All these traits fed into my Burroughs collecting. My father may have instilled in me the desire to collect, but in the depths to which I was willing to go to follow that desire, I followed my mother’s example.

When it comes to the question of why do I collect generally my parents are a big part of the answer. But if the question is “why collect Burroughs?” the answer could only be Naked Lunch. When I read Naked Lunch in the summer of 1990, my overwhelming reaction was: You can fucking do this? This is possible? Burroughs was the first writer who showed me that in literature, as in art, music and any creative endeavor, nothing is impossible and everything is permitted. Naked Lunch expanded my consciousness and opened up a new world of possibility like nothing before it. That same summer, the most important and most influential period of reading in my entire life, with the possible exception of the 100 days I spend in graduate school at the University of Iowa, I read Pynchon’s Gravity’s Rainbow. That year I took a course on Post-WWII American literature with Jonathan Wilson, a very popular professor on campus. The syllabus seemed to be full of books he was not excited to teach, and in class after class he would talk about the books he did not assign, urging us to read them. I dutifully wrote all the titles in the margins of my notebook and that summer I sought many of them out. Gravity’s Rainbow (and Naked Lunch) was one of the books in the margins. Again, Pynchon did things I never knew were possible in literature and I could not fathom that one mind could come up with such a kaleidoscopic, surreal worldview. I learned more that summer about my surroundings and about myself than in any of my courses. 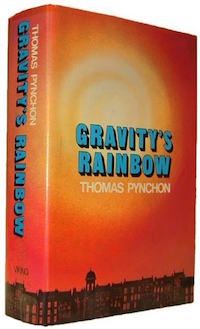 Since then I have read almost everything that Pynchon has written, yet I became a Burroughs collector, not a Pynchon collector. The reason stems from the differences between the first edition of Naked Lunch and that of Gravity’s Rainbow. Even at that early stage, as a neophyte collector, before I even knew Burroughs’ bibliography all that well, I realized that the Olympia Naked Lunch was cool and unusual. First of all, it was a paperback. I have always enjoyed the look and feel of a paperback over a hardcover. I knew as a collector that I wanted to collect paperbacks. Second, it was published by a pornographic press out of France, run by a maverick publisher who did not give a fuck. Gravity’s Rainbow was a hardcover published by Viking Press, a corporate publisher run by gray flannel suits who played by the rules. Increasingly, I found that those rules were determined by the debits and credits of a balance sheet. The alternative press was all about breaking, bending or ignoring those rules and creating new possibilities. Like with Naked Lunch in literature, I found that the alternative press did things that I did not think were possible in publishing. In the Mimeo Revolution, everything was permitted.

As I got more into collecting, the more I realized that novels were not where it was at. First edition novels are generally in hardcover and the products of corporate publishing, and as objects they are boring and, for me, uncollectible. First editions of poetry on the other hand generally came out of the alternative press and many of these books were in paperback, which I found fresh and interesting as objects. It took me a long time to realize that I collect Burroughs not because he is a great novelist, which he is, but because for the period in which I collect, 1957 to let’s say 1967, Burroughs was a great poet and artist. So I stop collecting Burroughs when he transitions from poetry to narrative, which meant getting in bed with corporate publishers. From that point on, Burroughs’ bibliography is fucked.

A look through his bibliography makes this clear. It makes perfect sense that Burroughs was first described as a San Francisco Poet in Chicago Review. For years, Burroughs was published with and alongside poets. Until the mid-1960s, his novels were published in paperback like books of poetry. And to me Naked Lunch feels and reads like a poetry chapbook from the Mimeo Revolution. This is especially true of the Olympia edition. For me that is the book’s appeal, and that is why I wanted to collect Burroughs, not Pynchon, even if I could not have articulated it when I started out.

Over the years my mom has expressed dire concern over the debits and credits of my balance sheet due to my Burroughs habit. I respond, “It’s alright, Ma, I’m only reading.” But I know in my heart of hearts that I am hemorrhaging cash. Yet I cannot help myself as collecting is in my blood and Burroughs has gotten under my skin. I am after all a momma’s boy. When I purchased my copy of the Olympia Naked Lunch, I thought I had arrived as a Burroughs collector and maybe possessing this book would stop the bleeding. Not so but, that said, the book is the beating heart of Burroughs collecting; it is what keeps the Burroughs rare book market alive and it is Naked Lunch which brings Burroughs to life for the average citizen, possibly turning that reader into a Burroughs junkie. Without a copy of the Olympia Naked Lunch on your shelves, your Burroughs collection is flatlining, but inject that purple and white paperback into your bookcase and your entire collection will rush back to life like Mia Wallace in Pulp Fiction.