What are you doing in the Fall of 2020? Need any vacation ideas? The European Beats Studies Network is planning a special conference on the cut-up in Paris and London in September of that year. Book your tickets now:

The conference looks to the future and will also be a major retrospective, featuring a triple book launch: a cut-up trilogy of incendiary pamphlets with expanded 60th anniversary editions of Minutes to Go and The Exterminator, and a never-before-seen handbook of guerrilla tactics assembled from recently discovered archival sources, BATTLE INSTRUCTIONS.

Recently, Véronique Lane and Oliver Harris have been preparing a Baedeker of sorts for those looking to explore the Beats in France during their excursion to Paris in 2020. Harris has been working on the cut-up trilogy mentioned above as well as always finding new angles for scholarly pieces, one of which is an exciting essay providing the details behind the iconic Paris pics of Burroughs from 1959. In 2017, Lane wrote The French Genealogy of the Beat Generation: Burroughs, Ginsberg, and Kerouac’s Appropriations of Modern Literature, from Rimbaud to Michaux. She also edited a special edition of l’esprit créateur (Vol. 58, No. 4 Winter 2018) on “French and Beat Literatures: A History of Mutual Appropriation, Reception, and Translation.”

Now mind you it ain’t fucking cheap to study abroad. French Genealogy is $110 in hardcover and about $40 in Kindle. For the budget conscious a paperback is due out for about $40 in April 2019. In order to take this trip you also have to be enrolled in the university it seems. From what I can tell, Lane’s journal is available on Project Muse, an institutional service. What are those travelling in economy, aka non-academia, supposed to do in this case? Do not get me started on the complete rip-off and sham that is scholarly publishing. It is somewhat frustrating to say the least. Membership has its privileges I guess. That said, I have been fortunate enough to have read some of Harris’ latest work. His latest essay on Paris 1959 will be published in Udo Breger’s Soft Need. Nice to see top-notch scholarly work in a little mag. It is what you would expect and I have no doubt that Lane’s work is just as well researched and insightful. So this stuff is definitely worth reading.

I can only offer you a cut-rate trip to 1959 Paris on Jolly Fats Weehawken. Lane and Harris are travelers and I am a mere tourist, but let me give you a peek at a lesser known, out of the way pic from Burroughs’ Paris years that I consider on par with the iconic shots of Burroughs discussed by Harris that you have all seen before. This is not Burroughs in the Danger Zone but it is forbidden territory all the same. Oliver Harris will take you to on a guided tour to the Académie française, but I will take you slumming to Le Sphinx Club. My favorite shot of Burroughs in Paris is from the 1960 Olympia Press Catalog featuring Bill the Stripper. They say a picture is worth a thousand words, but what about a collage. This all might seem incomprehensible on first glance but what is illegible is obscene and that seems somehow appropriate for describing this incredible Burroughs pic. 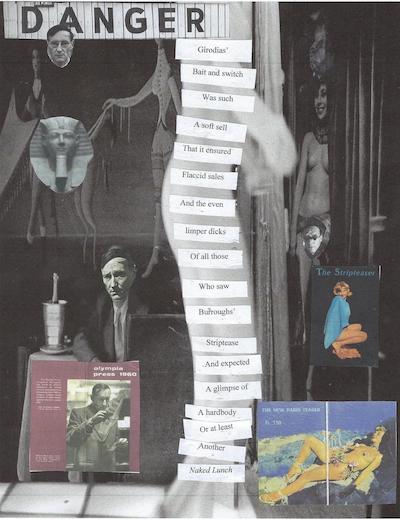 Written by Jed Birmingham and published by RealityStudio on 27 April 2019.
Oliver Harris

1 thought on “Paris: The Naked City”