In December 1971 Jan Herman visited William S. Burroughs at his Duke Street flat in London. He brought along a video camera — still a novel item at the time — and put it to good use. He made three tapes of conversations and a projection experiment created with Burroughs and filmmaker Antony Balch. “Had a meeting with Burroughs yesterday afternoon,” Herman wrote at the time to Carl Weissner (in a letter which he kindly provided). “To judge by a couple details he must have enjoyed himself too. We played with the video for about 2 and a half hours straight. He brought out his cassette recorder I set up the camera on his color tv and we cut every which way that was possible with the material at hand… I came away with 20 minutes of crazy video tape and the invitation to come back again soon.”

Recognizing the significance of these videos, which are likely the earliest videotape of Burroughs, Herman had been looking for a way to digitize them. RealityStudio proposed to help, but the nearly obsolete tape format presented difficulties. A state-of-the-art production facility managed to recover a segment of the video experiment — miraculously, the part featuring Burroughs — while another segment, which featured Balch, was lost.

Aside from the participants, no one has seen this video experiment until now. And while technically the video may show some deterioration of the magnetic tape, aesthetically none of the impact is lost. In fact, it is amazing that, some thirty years before “morphing” and digital technology, the experimenters managed to show just how easy it can be to manipulate moving imagery. No doubt the video, now that it is available, will take its place alongside the fold-in texts, cut-up tapes, and other film experiments that expose the techniques of what Burroughs called the Control Society. 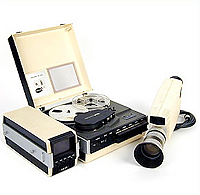 The video was recorded on Dec. 21, 1971, in William S. Burroughs’ London flat at 8 Duke St., where I visited him for several days. Tall and thin (very thin, I thought, but apparently in good health), Bill was reserved, generous and — despite reports I’d heard to the contrary — quite sociable.

I had an Akai video camera and portable reel-to-reel recorder with me. It used 1/4″ black & white tape. (At the time the Akai was the latest thing. Now it’s almost impossible to find one for playback.)

The filmmaker Antony Balch, who lived downstairs, brought his movie projector up to Bill’s flat, along with the unfinished footage of “Bill & Tony,” a movie he’d been working on. We turned off the lights and Bill sat in front of the movie projector. He looked remarkably like Buster Keaton, his stare so blank and deadpan he could have been a mummy. 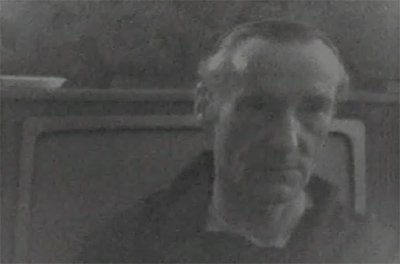 Tony ran the footage through the projector. I ran the video camera. What you will see, following the setup (left unedited to give context), are mainly four combinations of images in this order: 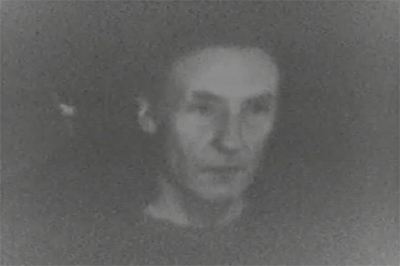 1) Bill’s face superimposed on his own, speaking with Bill’s voice 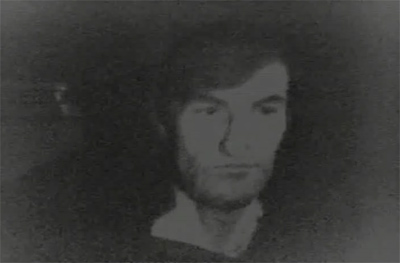 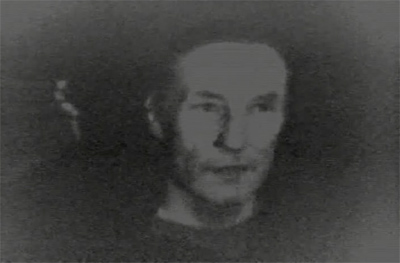 3) Bill’s face superimposed on his own, speaking with Tony’s voice 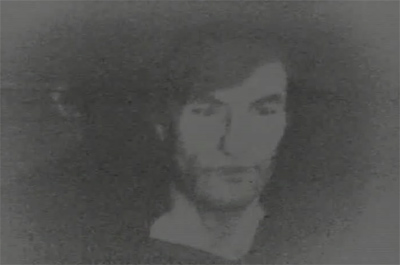 The words of the “Bill & Tony” soundtrack come from a circus sideshow spiel (“these monstrous creatures”) and a text by L. Ron Hubbard (“placement in space and time”), concluding in Bill’s famous drawl: “She was once a bee-yooo-tiful wooo-man!”

Bill called the video “quite a precise experiment” in an interview published in May, 1972, in Rolling Stone. He noted that the film projection “re-photographed on the video camera … faded in and out … so that you got a real-time section” of what was actual and what was superimposed. (See “Rolling Stone Interview” in Burroughs Live.) 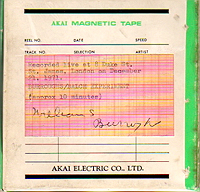 Although the experiment was precise, it was also rudimentary. And after 34 years in storage, the videotape has degraded and now looks primitive. Still, it gives the fantastic impression of a ventriloquist dummy coming to life or an ancient Egyptian mummy being revived to cheer the river gods.

I think Bill got a kick out of that and the demonstration of how easy it was, even with primitive means, to create a televised witch’s brew of, say, Nixon’s face superimposed on Mao’s, speaking with the voice of Hitler or Stalin, or even FDR. Of course, any combination can be applied.