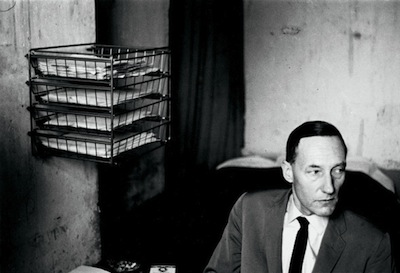 William Burroughs at the Beat Hotel, 1961, photograph by Harold Chapman

One of the most engaging presentations at the Naked Lunch @ 50 conference held in Paris in 2009 was given by filmmaker Alan Govenar. He presented audio excerpts from an interview with photographer Harold Chapman along with published and unpublished photographs Chapman had taken at the Beat Hotel. Because Chapman had been a resident at the precise time the hotel served as an impromptu arts lab for William Burroughs, Allen Ginsberg, Gregory Corso, and a mix of other poets and painters, his photos and memories made the place come alive. For example, Chapman recalled el hombre invisible suddenly materializing from a corner of Corso’s room. In his trademark twang, Burroughs mumbled an incomprehensible “greeting” that turned out to be “Photography is like Zen Buddhism. Why don’t you turn on.” Then he nodded back into invisibility in the corner.

Drawing heavily on the work of Chapman and fellow artist Elliot Rudie, who also lived at the hotel, Govenar has now completed a film about the Beat Hotel. It is currently premiering in New York and will open soon in other cities. (See the film’s website for playdates.) To mark the occasion, Govenar kindly offered replies to a few interview questions.

What inspired you to create a documentary on the Beat Hotel?

I was working on a short video on the influence of the Beats on the growth of French counterculture leading up to May 1968 for Le musée franco-américain du château de Blérancourt (located 110 km northeast of Paris) and came across Harold Chapman’s photos on the internet. And once I met Harold I saw the potential of making a long-form documentary. Harold’s stories and photos are iconic of the heyday of the Beat Hotel.

Can you describe the process of how you made the film?

The process for me was organic — one thought led to another, one person led to another — each scene emerged as it happened. The most difficult part was finding innovative ways to visualize the incredible stories that people told. Elliot Rudie’s drawings were invaluable — quirky and stylized — evocative of the time and place when he first made them. And then he offered to make more for the animations my editor Alan Hatchett envisioned with Blas Garcia. In addition to his work as editor and creator of some of the animations, Alan Hatchett also directed the dramatic reenactments that in their own quirky way mirrored or echoed what people had to say — all completed in a day with aspiring actors — who were willing to spend the time. The Beat Hotel is a low-buget film — with five shooting days over three years (and eight months of editing) — lots of planning, lots of dialogue that helped to define each step in the process.

While making the film, did you learn anything that surprised you or overturned some previous notion you had about the Beats or the hotel?

I was surprised to learn about the impact of the American beats on writers and artists in the UK, France, Denmark, Germany and elsewhere in Europe.

What do you think is the most important piece of art or literature actually produced at the hotel?

The Beat Hotel was an incubator of creativity — a community of “oddballs,” as Harold Chapman likes to say, that contributed to Ginsberg’s “Kaddish,” Corso’s “Bomb,” William Burroughs’ The Naked Lunch. Then, of course, there was the Dream Machine invented by Brion Gysin and Ian Sommerville — And cut-ups — which have had a profound resonance ever since … But we can’t forget the others who lived and worked there — the no-name people integral to the synergy of the place. The idea of “most important” is hindsight. At the time, everyone there was trying to do something important. In the end, some were more successful, but this fact doesn’t diminish the importance of the others who were there.

Out of all the writers and artists who lived at the Beat Hotel, is there any one who interests you the most?

Everyone who lived at the Beat Hotel interested me — I tracked down as many people I could find. I wanted to hear their stories, to see and read what they had done.

Do you think that any of the writers or artists who lived and worked at the hotel have been unjustly ignored?

What’s been ignored is the ways the Beat Hotel was an epicenter of the international Beat Scene.

Do you think there was anything special about the time or the place that brought together so many creative types (writers, artists, photographers)? Or was it just happenstance that they all gathered there?

The peak years of the Beat Hotel — 1957-1963 — were pivotal — crucial to the growth of the counterculture — not only in the US but across Europe. The 1950s were hidebound and repressive — the Beat Hotel was a safe haven for artists, writers, photographers, et al who were intensely committed to creating an alternative — a new way of thinking and making and living

How did you feel seeing the plaque unveiled at the Beat Hotel in 2009?

The plaque lists Burroughs first among all the writers and artists who lived there. Do you think that Burroughs had a different status than any of the other residents? Was he a bit of an elder statesman or éminence grise?


Burroughs had a profound influence upon those around him.

Would Madame Rachou have been amazed to learn that her hotel has come to have such a posthumous renown? Why do you think the place has such an iconic status today?

We look to the past to inspire us in the present — to chart a fresh course for the future.

Do you think there are other “Beat Hotels” in the world today?

I hope so. We live in troubled times — What becomes a “Beat Hotel” is often not known by the general public until it’s gone.

1 thought on “Interview with Alan Govenar”