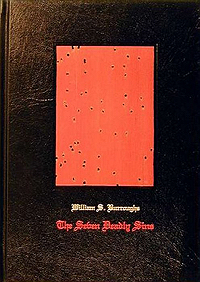 New York: Lococo/Mulder 1991, a signed and numbered limited edition of 150 copies bound in full leather and signed by Burroughs. Cover features an original piece of wood “shotgun art” by Burroughs. Features reproductions of Burroughs’ paintings illustrating the “seven deadly sins,” with text by him. All copies of the book have the printed page with “Luxe Edition of 150 copies” — this often creates confusion among collectors. But only the limited edition copies were bound in leather, each signed and numbered by hand. Most of the deluxe copies were never distributed, probably because of the high publisher’s price of $495.

_____ trade edition of 2,000 copies bound in cloth covered boards without dust jacket as issued. As with the above, this also features the wood “shotgun art” on the cover, which makes each individual volume unique in that not all of the wood pieces are exactly the same. Unopened copies in original box and plastic wrap were still available in 2001.

New York: Lococo Mulder 1991, a set serigraphed woodcuts. The edition includes 90 boxed sets, 10 artist proofs, 4 hors commerce, 3 printer’s proofs, and 1 right to print. Issued in serigraphed red wooden box includes cover sheet, 7 sheets with images and 7 sheets with text. Images made from paintings on Mylar and woodblocks shot by Burroughs with a 12-gauge shotgun. Each sheet is numbered and signed, and quite large at 45 x 31″ in a 48 x 34″ box.