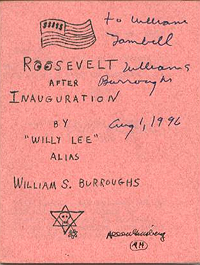 New York: Fuck You Press 1964, by “Willy Lee”, bound in stapled wraps. Maynard & Miles A9. Small and short (only 14 gathered leaves), this routine was originally intended for inclusion in The Yage Letters but was censored by the English printers. A version appeared in Floating Bear 9 (1961) before being co-opted by Sanders into this edition. Some copies of this work were released from the publisher with the spines not stapled. The publisher estimates 500 copies printed.

This bibliography of A-List publications by William S. Burroughs derives from Eric C. Shoaf’s Collecting William S. Burroughs in Print: A Checklist and is published online courtesy of the author, who retains all rights. Published by RealityStudio in April 2007.
Eric Shoaf Fuck You William Burroughs