On the flipside of the men’s magazine is the fashion magazine. The porno industry represents the seedy underbelly of the seemingly glamorous fashion industry. Both worlds expressed an interest in the Beats in the 1950s and 1960s. In her landmark memoir, Minor Characters, Joyce Johnson, Kerouac’s girlfriend when On the Road was published, describes how she first came into contact with the image of Kerouac through the pages of Mademoiselle. The magazine printed a picture of Kerouac that was then used in several print advertisements for On the Road. The ad is reprinted in Matt Theado’s The Beats: A Literary Reference. If you are going to get Johnson’s book, go get Theado’s as well. It is a treasure trove of source material on the Beats: reprints of manuscripts, letters, magazine articles and book reviews.

Mademoiselle separated itself from the competition by marketing itself to a collegiate audience. Until November 2001, scores of young women learned about what was new in fashion, art, and culture in the pages of Mademoiselle. On reading about Kerouac and the Beats in its pages, Johnson writes, “Thus several thousand young women between fourteen and twenty-five were given a map to a revolution.” This played into the deepest fears of Mr. and Mrs. Middle America. Surely some of those girls who flocked to North Beach and the Village clutching their Mademoiselles and On the Roads later found themselves in the pages of Swank. There are lots of casualties in a revolution, sexual or otherwise. Minor Characters makes this clear as does Hettie Jones’ How I Became Hettie Jones and Diane Di Prima’s Recollections of My Life As A Woman.

Mademoiselle jumped on the Beat bandwagon early. In the mid-1950s, the magazine was publishing poems by Gregory Corso from The Vestal Lady of the Brattle, before City Lights published Gasoline. The Beats continued to be regular fodder for Mademoiselle once the Beats became mainstream news. Mademoiselle‘s early discovery of Corso is not as surprising as it seems. There is a long tradition of fashion magazines latching on to avant-garde / countercultural movements, particularly in the realm of art. This partnership became very public when the Surrealists hit American shores in the 1930s and 1940s. Dali and his art appeared in fashion magazines. Dali even designed a shop window for Bonwit Teller department store. A Dada-cum-Surrealist like Man Ray blurred the lines between high art and high fashion. Clearly this cross-pollination had been an aspect of modern art long before photographer Cecil Beaton famously posed models in front of Pollock’s Autumn Rhythm for Vogue in 1951. Pop Art made such distinctions a joke. In a fashion shoot for Life, a Warhol screen test of Ivy Nicholson was projected on her as she modeled the latest “Underground Clothes.” 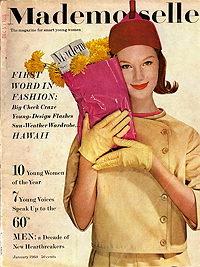 The world of fashion (and later the world of art) is / was driven by the shock of the new. In the 1950s, the Beats were new. A literary avant-garde to be exploited. Yet the Beats gave as good as they got. A fashion mag, like Mademoiselle, was a source of income. Ginsberg, the publicist for the Beats, played all the angles to milk the squares for cash. Gregory Corso was a master of the practice. In letters from the mid-1950s, Corso expresses his amazement that he conned Mademoiselle for $25 for his poems. In a letter from late 1959, Burroughs writes Ginsberg about just how welcome the check for his contribution to Mademoiselle was. In the 1950s, twenty-five dollars was easily a month’s rent.

Ginsberg got Burroughs into the pages of the January 1960 issue of Mademoiselle. The theme of the article and the magazine as a whole was a compendium of the young stars of tomorrow commenting on the dawning of a new decade. The symposium in which Burroughs appears is entitled “Quo Vadis” and was billed as “7 Young Voices Speak Up to the 60s.” The presentation of Burroughs’ as a young voice representative of his generation is therefore an example of Ginsberg successfully putting one over on the mainstream media. Burroughs was far from young (he was 45 at the time), but he was new. I would guess that Ginsberg sold him to Mademoiselle on the basis of his appearance in the November 30, 1959 issue of Life. In “The Only Rebellion in Town,” Paul O’Neil lambasts the Beats, but Burroughs comes out of it rather well. His talent as an author is grudgingly acknowledged. It is a case of hedging your bets about that in which you have absolutely no understanding. You do not want to look the fool later on. It probably helped that Burroughs was in Paris and that Naked Lunch was published there. At the time, Paris was the center of fashion. One of the shifts of the Sixties would be the displacement of Paris from that pedestal.

Burroughs, Ginsberg, Lorraine Hainsberry, Christopher Logue, Norman Podhoretz, Francois Truffaut and John Wain comprised the panel of young voices. Logue, Podhoretz, and Wain all had ties to the Beats. Logue was a member of the Merlin Group who discovered Samuel Beckett and worked with Olympia Press to print Beckett, Genet, and others as well as original dirty books written by Merlin members. Podhoretz wrote one of the most famous attacks on the Beats, “The Know-Nothing Bohemians,” for Partisan Review in the Spring of 1958. Podhoretz was a classmate of Ginsberg at Columbia and, no doubt, his conclusions in that article stem from his intimate knowledge of the events surrounding Ginsberg, Kerouac and Burroughs from 1944 to 1949 at the University. Wain was a key member of the Angry Young Men in England. Wain appeared in a joint anthology of the Beats and the Angries published by Citadel Press in 1958 in which Burroughs appeared under the name William Lee.

It is a remarkable collection of individuals, but Burroughs stands out. Given that in January 1960 few people in the United States could actually get a hold of anything by Burroughs in print, this piece in Mademoiselle might have been many readers’ first encounter with Burroughs’ writing. Mademoiselle printed a picture of Burroughs in the page providing biographies of the panel. He is the only one so pictured. This highlights what a man of mystery he was at the time. He was notorious as the picture makes clear. The word “danger” — printed on a fence — looms ominously behind him. Life provided the back story and the first photographs; Mademoiselle provided a text.

And what a text (posted here in its entirety). Burroughs’ contribution leads off the symposium. Although Gysin had discovered the cut-up by January 1960, Burroughs does not utilize it here. This is Burroughs in pure carny mode a la the Atrophied Preface and the Deposition: Testimony Concerning a Sickness. Young female readers, like Joyce Johnson, must have been left scratching their heads. The piece is full of drug references, such as China Boy and yen pox. The trope of horse racing taps into drug slang for heroin. Ginsberg’s piece builds off all this hip drug jargon. When asked about the Sixties, he opens by writing, “Everybody should get high for the next ten years.” Burroughs predicted a decade of mass consumerism and drug use, which was not far off the mark. Add to this Ginsberg’s call to “let’s blow up America — a false America’s been getting in the way of realization of Beauty — let’s all get high on the Soul” and you have a pretty good idea of what to expect in the decade ahead.

So the future of the 1960s was clearly laid out in the dying embers of the 1950s. The Silent Decade was far from it, and the Man in the Grey Flannel Suit was wearing Day-Glo underwear. Peace and love. Sex and drugs. Youth and Revolution. And where was this all this going to take place. A reader of Mademoiselle knew that, too. The University of California at Berkeley. What became Ground Zero for student revolt was the featured University in the Colleges and Careers section. Things may have been a little sleepy there in January 1960, but change was in the air. How did Mademoiselle know? Joan Didion told them. She wrote the article on Berkeley. She oughta know. She went on to write the book on the Sixties twice: The White Album and Slouching Towards Bethlehem. Not much better has been written on the subject. Pick up a copy if you can.