I have to think that a complete Fuck You Press bibliography would be a monumental task. Take this handbill from the March on the Pentagon in October 1967. It is clearly Ed Sanders’ handwriting and has the trademark Fuck You style, but the page size reminds me of Ted Berrigan’s C Journal rather than the standard 8.5 X 11 of most Fuck You stuff. I wonder if this handbill was run on the Phoenix Bookshop mimeo machine, which, as I understand it, Berrigan used to print C. Sanders also used the Phoenix mimeo for early issues of Fuck You Magazine and then he bought his own machine, which he installed at Peace Eye Books. Looking at other Fuck You handbills this “Chant to Exorcise the Pentagon” has a different feel to it while still remaining trademark Fuck You. I have never seen another one of these available. Any information would be great. 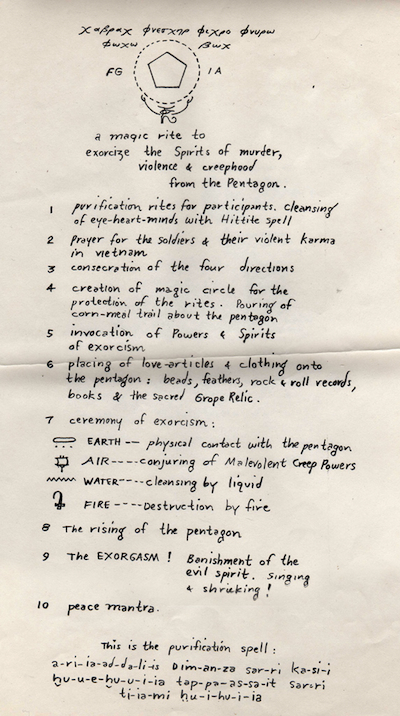 For those of you in the dark about what the March on the Pentagon was all about, read Norman Mailer’s Armies of the Night for enlightenment. Here are some YouTube videos about the March.

Written by Jed Birmingham and published by RealityStudio on 30 December 2010.
Ed Sanders Fuck You Norman Mailer