#16 Klacto 23 International September 17, 1899. An Installment in Jed Birmingham’s series of the The Top 23 Most Interesting Burroughs Collectibles. 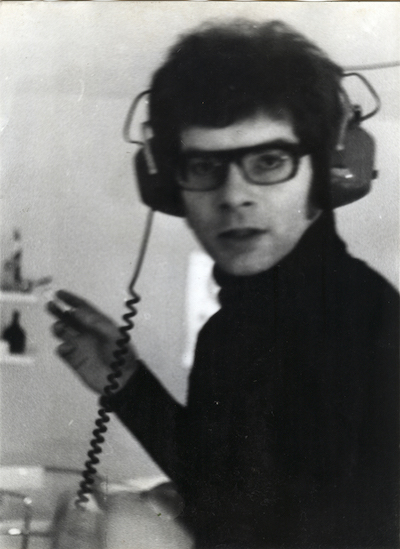 The iconic photo of Carl Weissner, which also happens to be my favorite and the most revealing, is the shot of him, cigarette in hand, Burroughsian specs firmly affixed, rocking headphones while scanning for intersection points amongst all the news reports from Radio Free Europe. The pic must have been taken around the time Burroughs sought Weissner out in Heidelberg in the early summer of 1966, drawn to Carl’s incredible energy and impeccable ear. Wrap your head around that for a moment. Burroughs, who at the time had the entire underground sitting at his feet and eating out of his hand, hopped on a plane and presented himself at Weissner’s door, not so much as a teacher, but impressive for Weissner, as a creative peer. Burroughs made the pilgrimage to Weissner. This just blows me away. Take for example the fact that in early December of 1964, the hippest of New York School poets, Ted Berrigan, himself a guru of sorts, eagerly awaited Burroughs’ arrival after years of exile on the New York waterfront, much like a bride pining for her GI months after VE Day. All that was missing on Berrigan’s part was a yellow ribbon tied around the door of Gem Spa while he was getting his Pepsi.

One of Burroughs’ great talents was his ability to recognize and motivate great talent. In the case of Weissner, Burroughs fed on the power supply of Weissner’s alternative current. Carl could hone in on frequencies that even Burroughs could not perceive. Burroughs realized that Weissner possessed the most perceptive ear in all of Europe. Weissner’s mastery of translation announces this loud and clear. Nobody else in Europe was tuned into the FM of the 1920 crystal set with an antennae of jissom (aka the pirate station of the international underground) with the fervor and dedication of Carl. With the possible exception of Jeff Nuttall. Or maybe Alex Trocchi. 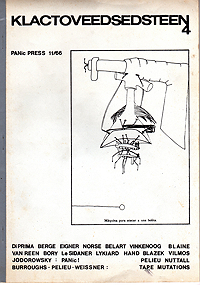 Carl’s own personal pirate station, Klactoveedsedsteen, remains one of the great mimeo mags of the post-WWII era. Again let’s not underestimate the influence of Nuttall here. Nuttall was co-editor of the first two issues of Klacto and it was Nuttall’s My Own Mag that inspired and influenced Weissner. In my opinion, Klacto would not quite reach the level of My Own Mag. It is close but I feel that Nuttall really challenged and inspired Burroughs (plus I think Burroughs was in a place where he wanted to explore the little mag as a primary outlet). For a brief period, the two played off each other, like two jazz greats, in ways that Carl and Burroughs did not quite achieve.

Without a doubt, I would put Klacto in my top ten list of mimeo mags. As you know I am all about lists. Again I am talking true mimeos, which are magazines printed in large part (like the first four issues of Klacto) via mimeography or similar duplicator technology, such as a rectograph. As such Kulchur or Black Mountain Review or Semina do not make the list. Here are some contenders:

What makes Klacto stand out from this group is the fact that it is such a chameleon in terms of format. Each issue is distinctly different. The mag starts out as straightforward mimeo with issue zero and one. Issue two is a mimeo as scroll; issue three is a mimeo designed to fade into oblivion. The later issues are offset yet continue to experiment with format. Weissner even issued a cassette tape. Klacto serves as a reminder that the Mimeo Revolution could explore other media. It was not primitive. Remember Grove Press sought to distribute underground films. Ed Sanders was in The Fugs.

Klacto reminds me of Charley Plymell’s Now in terms of its refusal to give readers one consistent, stagnant look. I should pause here to mention that Plymell’s Now deserves an honorable mention on my top 23. No other magazine that I can think of captures the shift from the Kennedy Camelot years to the radical turned-on Days of Rage. Burroughs’ appearance in Now Now helps signal that shift. Now fails to crack my top 23 because I feel its importance has less to do with Burroughs and more to do with its stance as a historical artifact. Largely forgotten today Now was a major magazine of the long decade and crucial if we are to remember how that decade mutated. 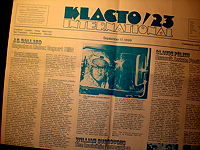 Of all the Klactos it is Klacto International 23 that makes my list. A hybrid newspaper/poster, it is the true underground newspaper of the 1960s. It functions as an alternative to the alternative press. “We don’t report the news – we write it.” International Times, Rat, The East Village Other, The San Francisco Oracle and other underground newspapers get all the press as key publications that revolutionized the mainstream press, but for me these publications quickly sold out to corporate rock and roll and seedy sex advertising, which financed their entire operation. Much of the underground press was at heart merely a more hip take on mass consumerism. Did IT and the LA Free Press seriously seek to drastically alter consumer culture? Or did they merely capitalize on it? I get the sense that they were content with bottom feeding on its fringes and margins. Klacto promoted a total assault on the culture. And on an international scale.

I could include Jan Herman‘s VDRSVP, issue five of The San Francisco Earthquake, on this list as well, but I have fluffed Jan’s joint enough already. This is Carl’s moment. This is when all his intense surveillance and eavesdropping on mainstream media outlets comes into full flower. Klacto International 23 is huge in scope and in physical size. As such it is as large as the scene and decade it covers with contributions by J. G. Ballard, Allen Ginsberg, Claude Pélieu, Sinclair Beiles, Liam O’Gallagher, Harold Norse, Wolf Vostell, Abbie Hoffman, Jan Herman, Jürgen Ploog, and Mary Beach. It is not just a poster, not merely a newspaper.

When I was a kid, I received a subscription of National Geographic in the mail. I spent little time reading the articles and slightly more time looking at the photographs. For me the big draw was the maps, particularly the huge maps that were tipped into certain issues. This was like a prize in a Cracker Jack box. The maps generally told a story. The one I remember best was one that documented Roman trade routes. One summer when I was around 11 or 12 years old I unfolded that map on the dining room table and covered the map with tracing paper. I spent weeks copying the map in multi-colored inks, like a medieval scribe creating an illuminated manuscript. I was fascinated with maps for a brief time. I created my own maps of imaginary wars and battlefields or of various explorations of undiscovered countries. It was a period in which I was trying to find my place in the world, perhaps because it was a time when I was travelling between homes. Weekends, summers, and holidays with my father; everyday life with my mom.

Similarly in the 1960s, the counterculture attempted to make sense of the world around it. Klacto 23 International documents where revolutionary counterculture of the late 1960s was and where it hoped to go. Think of it as a hip Baedeker for Jeff Nuttall’s Bomb Culture. Clay and Phillips’ Secret Location of the Lower East Side would lead you to believe that the Mimeo Revolution was a bicoastal phenomenon: New York City’s Lower East Side and San Francisco. Figures like Carl and his International Klacto demonstrate that this is not true. Klacto‘s byline lists Frankfurt, London, Paris, New York, San Francisco, Los Angeles and Calcutta. Copies were for sale throughout Europe into Turkey, Morocco and Israel as well as on military bases. It was free in Cuba. Spread it out on your dining room table and you can move through time and space back to counterculture Calcutta or Swinging London. Maps do not just tell you where you are; they also take you there. If books have similar powers, why is it that I am physically immobilized by my collection? Its sheer size makes it impossible to move and the thought of doing so is paralyzing. The prospect of what might happen to my collection when I am absent makes even vacations difficult. A large insurance policy is the only reason I can leave the house at all. 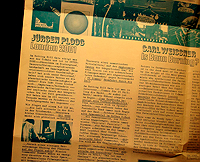 I envision that copies of Klacto were spread out over the kitchen table of 18 West 11th Street in Greenwich Village along with explosives and tabs of acid. This was all the news that was fit to print for the Bomb Culture. Carl mapped the flow of information, the trading of publications and ideas for the Electronic Revolution. It is part and parcel of his intense monitoring of the radio waves and TV sets. For Carl to be fully understood, his work must be approached with the writings of Norbert Wiener, Claude Shannon and Marshall McLuhan in mind. The same holds true for Burroughs.

Taking the lead from Burroughs, Weissner conducts a full frontal attack on mainstream media outlets. Klacto 23 International is professional in its appearance. Not sloppy or carefree. All business. Like Burroughs in his fedora and banker’s suit; it is offset printed and impeccable in layout. Like Herman’s The Dead Star it is an example of the democratic multiple. It was meant to be consumed by the general public even if that public could not stomach its message. Klacto was a true Naked Lunch. Let them see what was at the end of that long newspaper spoon. Weissner does not offer sound bites.

Four decades later, it is a collectible suitable for framing under double glass. Sadly, such is the fate of much of the revolutionary spirit of the 1960s. A manifesto, like Klacto 23 International, has become coffee table material and a conversational piece for the tastefully decorated loft or upscale apartment of New York City professionals. This is the killing jar of the collecting impulse. I dissect the 1960s as much as anybody, but at least I make my specimens available to the general public, right? That is what lets me sleep at night with a clear conscience as Weissner’s Klacto 23 International sits suffocating behind glass in my bookshelf. I encourage you to get your own copy, open it up, soak it in, and let it breathe. Perhaps the revolutionary spirit of the 1960s will Febreze the consumerism of designer candles and potpourri out of your tastefully decorated apartment forever, but not really. Things will never smell as fresh and dangerous as the 1960s again. Or as recent events suggest, maybe they will? Where there is smoke there is the fire of the revolutionary spirit.