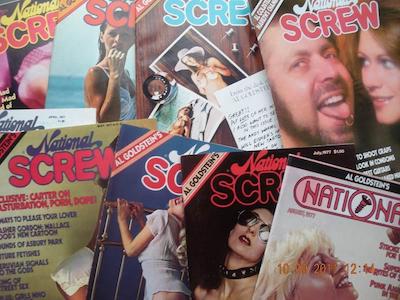 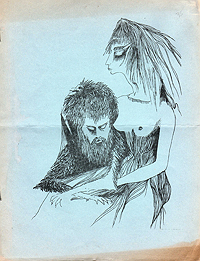 Take these National Screws. They are selling for about $75 a piece. A little over ten years ago Fuck Yous and My Own Mags were selling around that price point. Heck, you can still get late issue Floating Bears for about $75 an issue. Kulchurs are cheaper than that. So are Yugens Side note: Floating Bears have been consistently undervalued. If you look at bookseller’s catalogs from the 1960s, you could get early issues of Floating Bear for around $15. When I started collecting in the 1990s, the price had not changed that much. The Between the Covers catalog changed all that. Is there going to be a similar jump for a men’s magazine like National Screw? Or at $75 an issue have they already made the jump?

Clearly the collectible content is there. It does not get more cult collectible that Burroughs and Bukowski and they are all over the men’s mags of the 1960s and 1970s. But there is more. Take a look at the description for the National Screws and you have a fascinating snapshot into 1970s popular culture. Get away from the Hugh Hefners and start slumming with the Al Goldstein’s and Larry Flynt’s and things get really interesting. Like it or not these guys were mavericks and had an “I don’t give a fuck” or should I say “Fuck You” editorial stance. Another side note: This is why Maurice Girodias and Barney Rosset will always be more interesting publishers to me than James Laughlin and Lawrence Ferlinghetti. Girodias and Rosset published Burroughs when it meant sticking your neck out and putting your balls on the line. Laughlin never published Burroughs and Ferlinghetti waited until the West Coast was clear. Of course I am being unfair to Laughlin, who championed Pound when he was a complete untouchable, a Fuck You to the literary establishment and U.S government that was as daring as anything Rosset or Girodias did, and to Ferlinghetti, who published Howl, which got the ball rolling for Rosset as much as other obscenity rulings like the 1957 Roth case. But everybody’s got their favorites, right? Girodias and Rosset forever. To get back to my point, we might be at a turning point where men’s magazines with literary and popular culture interest on top of pictorials make a radical jump in value in a rare book catalog like the Fuck Yous and My Own Mags before them. 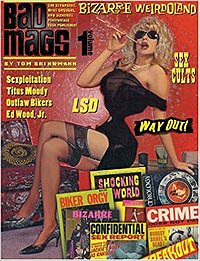 There are some things I consider when thinking about men’s mags exploding in the rare book field. Let’s face it, lots of men’s mags are complete schlock without literary value. Now for some people this “so bad it’s good” quality makes them collectible. I hear you. Read Bad Mags Vol. #1. This shit is collectible already, particularly the way out of left field stuff. For $15 I am right there but not for $150. Yet increasingly you are seeing rare booksellers peddle exploitation material and feature them in catalogs. Brian Cassidy is one example. It is one thing to sell a pulp paperback entitled Lusty Librarians but another to sell a copy of Cheri. Brian has yet to extend his market to men’s magazines. Time will tell.

Men’s magazines also have large print runs. Most little mags had runs of under 1,000 copies. Mimeo mags top out at 500. There is a rarity factor there. A men’s magazine might have hundreds of thousands of copies. On the downside in terms of rarity is that little mags found their way to individual bookshelves. They are not disposable reading in the same way men’s mags were, so despite a large print run some men’s mags can be quite rare because few people felt compelled to collect them. For a men’s mag to reach the hundreds of dollars it has to be truly rare, which is uncommon for many men’s mags. The exceptions have the chance to become the new measuring stick in setting higher prices and finding their way into rare book catalogs.

But for me the bottom line in considering if men’s mags will make the jump to higher end collectible is that they were mass market publications for the most part, printed just like Time and Life. As everything goes digital and print dies its slow never to be completed death, glossy mags will approach obsolescence. With death comes the fetish but the glossy magazine is just not as interesting to me as an object as a mimeograph or artist’s magazine. They are not handmade art objects (and I do not want to hear your crap about the artisanal aspects of offset printing and the like). But hey, that is just my fetish. It takes all kinds as the content of men’s magazines proves.

Personally I am not at a place where I will spend $75 for a National Screw or any men’s magazine even if Burroughs is in it. Prices are already getting out of hand. I started collecting them because they were cheap in the first place. Well maybe second place. Burroughs always comes first. But I started collecting Burroughs’ appearances in little mags because they were cheap as well. They are not anymore. Is now the last chance to pick up a girlie mag before they go pro?

Written by Jed Birmingham and published by RealityStudio on 30 June 2019.
Al Goldstein