Q: What is with all the men’s magazines?

A: Oh, I read them for the articles.

Really? In part. Take exhibit A: the July 1961 issue of Swank. For anybody interested in the textual history of Naked Lunch, this issue proves to be very interesting. Burroughs contributes “The Word,” “a first draft of a section of [Naked Lunch] and contains material that has never been published before — given to Swank by poet Allen Ginsberg.” In the introduction to the piece, John Fles, a former editor at Chicago Review during the Naked Lunch scandal in 1958, writes “The Word is the striptease the author does for you with the snake of language. The Word — this is just a thin slice of a 60pp unpub’d ms. — is the précis of all of Naked Lunch…” In fact, this piece of The Word manuscript appears in cannibalized form in the Atrophied Preface section of the Olympia Press and Grove Press Naked Lunch. The prefaces of the Grove and Olympia printings differ from each other and differ from this selection in Swank. In fact, this piece from Swank does not directly correspond with the version of “Word” that was published in Interzone. 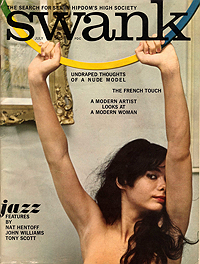 In July of 1961, Naked Lunch had yet to be published by Grove. The book was, in certain circles, highly anticipated and expected at any moment. A note attached to Fles’ Introduction states that publication was expected in April or May of 1961. The book was not officially released until November 20, 1962, over a year later. One reason for the delay was the expected (and rightly so) obscenity trial following the novel’s publication. Barney Rosset and Grove Press were waiting until the time was right to defend the novel in the courts and the court of public opinion. The trials surrounding Lady Chatterley’s Lover and Tropic of Cancer set the stage. The potential obscenity trial surrounding Floating Bear 9 which published “Roosevelt After Inauguration” in June 1961 further put matters on hold. Every magazine appearance and review relating to Naked Lunch was potential material for the trial, so even this issue of Swank can be viewed as an exhibit for the defense of the novel.

This section of “The Word” coupled with Fles’ introduction stands alongside the more obvious “Deposition: Testimony Concerning A Sickness” and “Letter from a Master Addict to Dangerous Drugs” as a document that provides a statement of purpose for the seemingly immoral and inexplicable Naked Lunch. “The Word” is described as a “striptease” and a “précis.” It is an unveiling, a revealing of the mysteries of the novel. In it, Burroughs lays the text bare in his own trademark style. He shows his hand. I have written elsewhere about how the prospect of an obscenity trial dictated critical and readerly approaches to the novel that continue to be in force to this day. The peek into the flesh of Naked Lunch that Burroughs allows in Word becomes something of a complete revelation in the Deposition. Or does it? Elsewhere, I have also discussed how these statements of purpose are a drain on the power of the novel, and can be considered a con of sorts. Such ideas are by no means original to me or to critics, like Jennie Skerl or Robin Lydenberg, who made similar statements in William Burroughs: At the Front: Critical Reception, 1959-1989. There were concerns about the literary cost entailed in defending Naked Lunch back in the 1960s.

Take “Sigma Project No. 13,” the minutes from the inaugural meeting of John Calder’s Writers Night at Better Books in November 1964 that included Peter Brook, John Arden, and Adrian Mitchell discussing The Theatre and Its Future. This single mimeographed sheet was a supplement to the Moving Times, a rather nebulous newspaper / little magazine project of Burroughs’ that appeared in My Own Mag as well as in a broadside poster issued by the Sigma Project as Project No. 1. The minutes state,

How much longer must we wait before it dawns on us that the world of William Burroughs’ Naked Lunch is far more real and even at its most phantasmagoric, more to the point than this blind, self-perpetuating, hysterical delusion we call modern civilization.

The fact that we can allow ourselves again and again to be sidetracked into “seriously” discussing whether Burroughs’ book is “obscene” or “art” or anything else underscores how deeply we are immersed in our delusion and just how widely we have missed the point he is making.

Our tactics for defending its publication must surely be relative to the nature of the resistance it engenders and, if they are to be effective, must break entirely with the terms in which that resistance in (sic) expressed. They must be an OUTFLANKING.

Calder published Naked Lunch in the United Kingdom in 1964 so a similar process of defense to Grove’s was in progress at the time of this meeting. Champions of Naked Lunch were offended by all the various stripteases surrounding Naked Lunch. Some things should be left to the imagination. 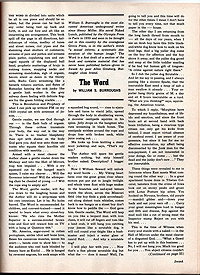 Clearly, the July 1961 issue of Swank proves of interest to those immersed in Burroughs on several levels. This issue advertised itself as “the search for sex in hipdom’s high society.” Here are articles on jazz (Charles Parker), blues (Billie Holiday), the French, modern art, and beatniks. Jonas Mekas, the critical voice of underground cinema, contributes an article entitled “The Honest Art of Hollywood.” Tuli Kupferberg, who later gained fame as a member of the Fugs, writes an article. Check out Tuli’s staple bound treasures from around 1961/1962, Yeah and Birth, if you get a chance. They are a sign of the times around the corner. Similarly, the gumbo of obsessions that boiled over later in the decade is present in this issue of Swank.

I mentioned in an earlier post that a collection of men’s magazines is an inexpensive way to collect the writers of the Beat Generation. As you can see from this issue of Swank, such a collection is very informative as well. The multifaceted role of sex in the avant-garde and counterculture is a field that has been turned over by scholars for years, but there is much left to uncover. Publishers, like Taschen, have issued multiple volumes on the history of men’s magazines, but for the most part these books reproduce images rather than study them. Stephen Gertz’s book, Dope Menace, provides a similar look into elements of sleaze in drugstore paperbacks. Yet his essay introducing the book is worth a close look as well and opens the door to future scholarly attention. Gertz’s book has gotten quite a bit of notice in the media. At last count, two dozen University libraries have purchased the book, and Gertz has been asked to lecture on the subject at the University level.

And then there are the photos. The recent death of Betty Page brings to the forefront that many images from men’s magazines in the 1950s and 1960s have become iconic. Many people appreciate them as art. Many enjoy their comic elements, just as many others despise them. For better or worse, the men’s magazines of the post-WWII era are a major part of the story of not just the sexual revolution but the myriad other revolutions occurring after Hiroshima. As a brief scan of these magazine covers related to Kerouac and Burroughs reveals, much has changed in the presentation of sex since the 1950s and 1960s, but much has remained the same. The story of the sexual revolution is still in the act of being told. Whether you are telling a cautionary or celebratory tale, a close look at the photos and articles of men’s magazines are an essential part of the history. 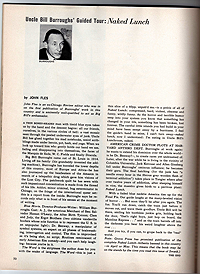 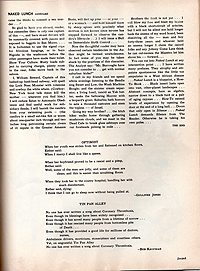