In the last few weeks, eBay featured a couple of men’s magazines with William Burroughs appearances. A nice copy of Man’s Wildcat Adventures attracted several bidders and sold to a book dealer in California. Later, a copy of the little known British magazine King appeared on the market. On a whim, I picked up it for around $40 with shipping. Having never noticed the magazine before, I have no idea if this is a good price or not. But these two items reinforced an idea gestating for quite some time: men’s magazines with a Beat appearance would make an unusual and interesting collection.

By men’s magazines, I mean adult men’s magazines: the glossies fashioned in the style of Time / Life magazines featuring nude pictorials, lifestyle articles, essays, interviews, and fiction. Playboy remains the epitome of this genre; not GQ or Esquire. I will discuss adult periodicals all across the exploitative / explanatory spectrum. A handful of Beat and Beat-related authors graced the pages of these mags. The authors that immediately come to mind are Jack Kerouac, Charles Bukowski, and William Burroughs. 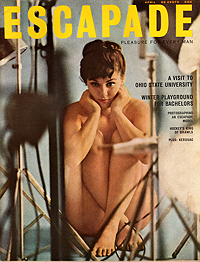 After the publication of On the Road thrust Kerouac in the spotlight, he became a heavily sought after and well-paid writer for hire. Not surprisingly given the sex, drugs and jazz elements of On the Road, men’s magazines, like Playboy, asked Kerouac to define the Beat Generation within their pages. Kerouac’s good looks did not hurt either. It was like James Dean and Marlon Brando could write. For the most part, Kerouac wrote non-fiction presenting his world view. Kerouac’s most sustained work in this area was with Escapade. Escapade was a high circulation competitor of Playboy that featured major authors like Nelson Algren and Ray Bradbury as well as articles on Hemingway and Salinger. From June 1959 to April 1960, Kerouac wrote a monthly column called “The Last Word” on a variety of topics like jazz, baseball, Zen, and the literary scene. Readers might expect Kerouac to chronicle the hot, racy underground culture he depicted in On the Road. He writes on the underground but not the world of the sexually hip. Instead, Kerouac’s jazz articles show him to be knowledgeable about the avant garde music scene. In a column on the literary scene, he champions the yet unpublished Naked Lunch as well as Allen Ginsberg and Gregory Corso. Kerouac ends that piece calling for a revamping of the publishing industry and urging the growth of independent publishing. His writings on Zen are groundbreaking in addressing Eastern religion before it swept across the American consciousness. Yet, his eleven pieces (thirteen if you count an earlier piece in April 1959 and a much later rewrite of his first “Last Word” column in January 1967) also reveal the rather nostalgic and conservative side of Kerouac that fully emerged in the late 1960s. This side becomes most clear in his columns on baseball, world history, and politics. The Escapade pieces have been published in their entirety in the Good Blonde collection. The material collected in Good Blonde, of which Escapade plays a major part, is essential reading for anybody wanting to get a fuller understanding of the real nature of Jack Kerouac and not just the mythic figure. Tom Clark, author of a biography on Kerouac, wrote an essay entitled: “Kerouac’s Last Word: Jack Kerouac in Escapade.” It was printed in a small run of 500 copies by Water Row Press in 1986. I have not read Clark’s piece, but clearly, Kerouac’s essays and articles merit such treatment.

Charles Bukowski also enjoyed a long relationship with the adult publishing industry. I do not think Bukowski ever wrote a column for a men’s magazine, like his cult classic “Notes of a Dirty Old Man” for Open City or his openly sexual column for The LA Free Press. Bukowski flourished in the underground papers in Los Angeles. In addition, I do not remember him often being interviewed or consulted on issues concerning the hip and oversexed, although he may have been interviewed by Hustler on the topic of sex. When I think of Bukowski and the men’s mags, I think of Buk’s short stories of the 1970s. Buk on the make both financially and sexually. Buk just about to make it big in the writing game. The Buk of Women, reading engagements, Love Is a Dog from Hell, and Linda King. As Bukowski’s cult fame grew, so did the line of women eager to get in between his dingy sheets. One product of this period was a steady stream of explicit short stories depicting his sexual fantasies and exploits. Buk had sex on the brain and the men’s magazines, like Adam, Fling, Hustler, and Screw, ate it up. For Bukowski, such writing was profitable (it helped supplement the checks from Black Sparrow Press), but generally it was not fun or easy. Like the porno writers for Olympia Press, this material was not Bukowski’s best work, and the work was in some cases poor and forced. Unlike Burroughs and Kerouac, Bukowski wrote for the harder porno mags of the time. And his material is of the type one would expect to see in a very explicit men’s mag. Howard Sounes in Locked in the Arms of a Crazy Life writes of this period, “Bukowski commonly used extreme language to shock: women were ‘whores’ and intercourse was ‘rape’, pandering to his reader’s basest expectations.” In some cases, Bukowski’s work proved even too strange for the likes of Hustler. Like Kerouac, Bukowski’s writing for pornographic magazines has been overlooked. A closer look at these works provides interesting insights into role of sex, pornography and women in his fiction. If Women and Love Is a Dog from Hell are considered classics and enjoy critical scrutiny, then the underside of that coin deserves attention as well. Bukowski’s pornographic stories (both well and poorly written) bear re-reading by both critics and laymen.

6 thoughts on “Burroughs and Beats in Men’s Magazines: Introduction”