I spent some more time on Dave Moore’s page of Burroughs covers the other night. An interesting piece could be written on the cover art and external packaging of Burroughs’ work over the past five decades similar to the essays that have been written on the prefaces, introductions and afterwords that comprise the various editions of Naked Lunch. Burroughs’ work always seems to be adapting to changing times and audiences. This is one reason I think his work will last in the reading public’s imagination. 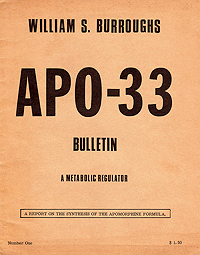 Looking at Dave Moore’s page, I am always drawn to one image in particular: The Fuck You Press edition of APO-33: The Metabolic Regulator. I would love to own one, but I doubt I will ever get the chance. Like Issue 24 of Floating Bear Magazine, the Fuck You APO-33 is a stopper that you just never hear about and never get the opportunity to see. I saw it for the first time years ago in Maynard and Miles. It has a simple production layout on the covers; I would be interested in seeing the contents. Apparently the layout of the contents concerned Burroughs as well. When he received a copy of APO-33 from Ed Sanders, Burroughs expressed nervousness about the print job and Sanders halted production. According to Maynard and Miles, “Since the mimeo would not print the full width of WSB’s columns before it faded, the columns were typed down the page and a new column started at the top again, which resulted in columns changing a bit from WSB’s manuscript. Also the illustrations, done on the electrostencil, did not turn out too well and were glued in the finished text at places different from where they were glued in the original manuscript (one was glued over some text).” In his biography on William Burroughs, Barry Miles writes, “The technology did not exist to reproduce the photographs on the stencils, so they were done separately, and Peter Orlovsky, Allen Ginsberg’s lover, was responsible for cutting each one out and sticking them on the finished pages. Unfortunately Peter was on amphetamines at the time and set about his task with furious energy, scattering pictures and glue everywhere.” 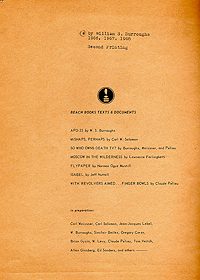 Burroughs’ reaction has always mildly surprised me. This concern with the layout seems miles away from the author who wrote and published Naked Lunch in 1959. In Naked Lunch, Burroughs goes to great lengths to diminish himself as an author going so far as to say he had little recollection of writing the book and calling himself “a recording instrument.” In addition, Naked Lunch was by all accounts put together in the most haphazard and rapid fashion calling into question if Burroughs ever had a set form in mind as he wrote the novel. The cut-up experiments of the Beat Hotel years and after also assault the primacy of the author and introduce elements of chance and randomness that seemed to interest and please Burroughs. All this points to the fact that Burroughs would be less iron-fisted with the production of his works than demonstrated with the Fuck You piece. Clearly this is not the case showing that Burroughs took great care in how his work, especially the visually rich work of the mid-1960’s like Time and APO-33, appeared on the page. This concern with the visual aspect of words and the physical act of reading places Burroughs alongside the concrete poets. Not surprisingly, Burroughs’ cut-up work in Minutes to Go and The Exterminator appeared in magazines side by side with several concrete poets. More on that to come.

In any case, a few copies of the Fuck You APO-33 saw the light of day, roughly 10-20 copies which were collated before Burroughs’ reaction. According to Barry Miles, an initial run of 5,000 was planned. I have never seen one of these copies for sale on the open market and prior to Dave’s page I only knew that UCLA’s library had one. I assume that the University of Connecticut possesses a copy as well since that institution houses many of Sanders’ papers and a sizable Fuck You Press archive. Back in 1965, the Phoenix Bookshop received a few copies. According to Maynard and Miles, the Special Collection Department of Northwestern University had a copy as well as Barry Miles. It has been 15 years but sooner or later I will see a copy up for sale. I can only imagine what it would sell for. 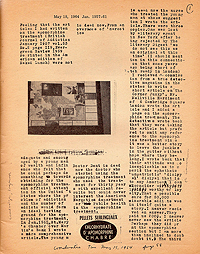 If the Fuck You APO-33 is forever out of reach, the Beach Books editions of 1966-1967 and the third edition of 1968 are a fine consolation. All three of these editions were printed in runs of 3,000. It should be noted that the third edition states that it is the second printing “(c) by William Burroughs 1966, 1967, 1968.” Burroughs definitely felt comfortable with the Beach Books editions. These editions are a photo offset of Burroughs’ own manuscript. Mary Beach, publisher of several magazines and books that featured Burroughs as a textual and visual artist, passed on recently in her 80s. Various obituaries and celebrations written about Beach mention her relationship with Burroughs. Beach and her husband Claude Pelieu were heavily influenced by Burroughs’ cut up techniques.

I have never given APO-33 its proper due. Time always seemed more important and more inventive to me. I am not alone; Port of Entry scarcely mentions APO-33. Looking closely at APO-33 again, I have to reassess my prior feelings. The Bulletin proves to be a major statement of Burroughs every bit as interesting as Time and central to Burroughs creative output of the mid-1960s. Like Time, APO-33 highlights Burroughs’ concern with the interplay and presentation of textual and visual experiments. Collage and cu-up techniques are on ful display. Where Time played with the magazine and newspaper format, APO-33 also toyed with the format and content of the academic journal harkening back to Burroughs’ beginnings as a writer in the British Journal of Addiction. APO-33 rewrites his 1957 scholarly article. As APO-33 demonstrates, Burroughs was no longer content to experiment with drugs and chronicle drug addiction in works like Junkie and the British Journal. He increasingly concerned himself with exploring the addicting and controlling aspects of language and image as well.

The various editions of APO-33 appear on eBay every so often and sell for under $100. Several copies are available from booksellers on abebooks. There is no reason to spend much more than $100; $150 for an unusually fine copy. APO-33 is cheaper than Time and every bit as interesting. Both pieces highlight Burroughs during one of his most radical creative periods, if not his most non-commercial. In my opinion, these works will find an audience of art collectors, as much as book collectors, seeking to document the relatively undiscovered period between Abstract Expressionism and Pop Art of the early 1960s. In time, these art books of Burroughs will be as prized as the later shotgun art work and the collectible first editions.