A Text by William S. Burroughs

With an Introduction by Dave Teeuwen

In 1969 William Burroughs published seven short pieces titled “Abstract” and sent them out to various small-press literary magazines and underground newspapers. Throughout the 1960s Burroughs was extremely active with the alternative press. Bibliographies of his work show that he was published hundreds of times in that decade. The less formal and more daring nature of the underground press allowed Burroughs to perform verbal and visual experiments that larger publications would never stand still for. It appears there was little editing of his work by these publications, who were happy just to have a submission from the renowned writer. In essence, the small press and underground newspapers served as a public laboratory for Burroughs’ experiments. This seems fitting given the lack of payment for his work (in most cases).

Burroughs’ style of experimentation is exacting and detailed, while not ignoring the utility of the random happening. He attempts to uncover all angles of a new form or method, seeing just how far the possibilities can be extended. The “Abstract” experiments use old tropes to explore new ideas. Characters familiar from other texts return and are placed in new situations, where they take on different or added significance. For instance, Audrey outside of the context of The Wild Boys comes across differently in the disparate nature of the “Abstracts” than when you read about that character in a continuous series of montages. By mixing and cutting up old ideas, putting them in new frames of reference to see what emerges, Burroughs shows that the writing process itself is often as important as the content.

The “Abstracts” are easily recognizable as being in the same format as the Penny Arcade Peep Show pieces interspersed throughout the novel The Wild Boys. As with all of Burroughs’ novels up to this point, he appears to have used the small press as his makeshift laboratory. He typically wrote many versions of an experiment and then sent out the pieces he didn’t intend to use in the novel, presumably to acclimatize his fans to the coming novel. (This is true, of course for five of the “Abstract” pieces. The “Abstract” that appears in Intrepid 14 was also used as one of the Peep Shows in The Wild Boys. The “Abstract” from Klacto/23 International appears in a truncated form in that book as well. Though it came much later, the Fruit Cup “Abstract” was also reprinted The Burroughs File in the mid-1980s.) It was an effective tool, at the time, and Burroughs especially used it for the books he published in the early 1970s.

By the time the “Abstracts” were written, Burroughs had already experimented with publishing continuous and connected ideas in multiple small press publications. It is unlikely that the journals receiving the pieces knew of the other similar material being sent out for publication, probably at about the same time as the piece they were receiving. A number of texts about Dutch Schultz were published in this same manner, connected mostly by content, though the actual words of Dutch Schultz are always present as an anchor in terms of form. Scientology also gets a thorough treatment at this time, usually in the form of an indicting essay.

The seven “Abstracts” of 1969 share elements of form and content. They are visual pieces, hinting at Burroughs’ experiments with the film script (language describing an always visual end product) and the way a film script is a kind of cut-up by its very nature. More importantly for Burroughs, however, film allowed an immediacy and directness that writing lacked. As he said in a review of Brion Gysin’s book The Process, “Unless writing can bring to the page the immediate impact of film, it may well cease to exist as a genre.” The “Abstracts” are immediate writing, writing about the present.

They lightly touch on a variety of subjects familiar to readers of Burroughs’ 1960s work, using a more mature, controlled version of the cut-up than is seen in material of the early 1960s. The majority of the “Abstracts” draw on the pre-Wild Boys material coming out of that book’s preparation. Audrey, Burroughs’ alter-ego in The Wild Boys, Port of Saints and Exterminator, appears numerous times. The familiar scenes of cold, fact-hardened scientists and doctors with no apparent human feeling also appear, as do continuous South and Central American narrative scenes.

Lip, a one-off small-press journal published out of Palo Alto by artist Jerry Youdelman (with editing help from underground comic artist George DiCaprio and Noe Goldwasser), was the only small-press publication to publish two “Abstracts” at the same time. All other publications were given a single “Abstract” (though, in the early 1970s, a few more original pieces were published and some of the 1969 ones were reprinted in different journals and underground newspapers). It is interesting, but not unusual, that Burroughs would willingly publish in a journal that disappeared so quickly. This earned him a reputation for being generous with his work among the small-press journals of the time.

The two Lip “Abstracts” bring out some consistent Burroughsian themes of the late 1960s and early 1970s. The structure of each is essentially that of a covert Engram audit, a process Burroughs knew well by 1969. In 1968 he had undergone a full audit with the London Scientologists, and though he didn’t trust their adoration for L. Ron Hubbard, he did find the audit process useful (he famously owned his own E-meter), recommending it to friends.

The first of the two “Abstracts” attempts to rid the reactive mind of all negativity, anger and disgust by bombarding it with images of war, fear, embarrassment and disappointment. With Dianetics, Hubbard postulated that constant repetition of negative or frightening words and phrases would render a person’s thoughts harmless, causing the fear or negative reactions in the mind to be negated. The reactive mind is the mind that has not been conditioned to ignore or clear these thoughts from the psyche. It is the subconscious, reactionary part of the brain that you cannot control. As Burroughs says in The Job, “The Reactive Mind consists of goals so repulsive or frightening to the subject that he completely reacts against them and it is precisely this reaction that keeps these goals in operation.”

One after another, the images are presented, tied together by a common theme of horror by naming the “Abstract” itself as the reactive mind. Burroughs then ties it to the Word Virus, one of his more famous concepts. The stated purpose of the “Abstract” is itself to “Destroy all minds,” perhaps through the repetition of horror imagery, clearing and destroying at the same time. It ends with an odd scene of the marriage of two Gods, one male, one female. The female God causes the universe to fade into blackness.

The second “Abstract” is reminiscent of the method employed by Burroughs and Antony Balch in the film Bill and Tony. He creates a scene and then immediately juxtaposes it to another, opposite scene. In most cases these are scenes of social embarrassment or public disgust against an outcast figure in society (the Beatnik, the junky, the faggot — all the familiar Burroughsian stock characters), similar to the first “Abstract.” In his usual fashion, Burroughs does not spare the reader by using the more polite term or image; he embraces the hated image, following Hubbard’s directions carefully, clearing / destroying the mind. For instance, the efficient Swedish workers do everything “right now,” but Burroughs equally accepts the stereotyped image of the lazy, singing Mexican with a guitar who does no work at all. As with the first “Abstract,” the piece ends with an image of exaggerated colour fading to black, this time the red stop-light face of hate that disintegrates into darkness.

The Lip “Abstracts” stand out among the rest of the “Abstract” collection as they are more instructional and more spare, despite presenting images that realize both grand and small scales. Only the shorter, even more terse “Abstract” sent to the Wichita, Kansas journal Mikrokosmos compares (it is most similar to the second of the Lip “Abstracts” in its style, presenting one idea and then the opposite of it in quick succession). The other “Abstracts” leave more room for narrative and even, to some degree, character development.

The Lip “Abstracts” are examples of the power of clearing the reactive mind. The language encourages the reader to embrace both sides of every situation, to see with two minds at once. This is reminiscent of his rejection of the the polarizing effects of Aristotelian, either / or approaches to language as described by Korzybski in Science and Sanity, a book Burroughs recommended as mandatory reading for all college students even late into his life. With their instructional tone, the Lip “Abstracts” are dramatic demonstrations to be used for escaping this polar way of thinking, as well as providing a kind of back-bone to the randomness of The Wild Boys. They show that, as always, Burroughs creates art that is meant to be used for confrontation and exploration.

A Bibliography of Texts titled “Abstract”

Via/Structure Implicit and Explicit, No. 2 (1973; reprint of Intrepid). 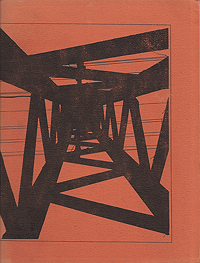 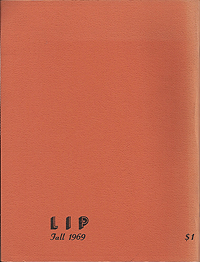 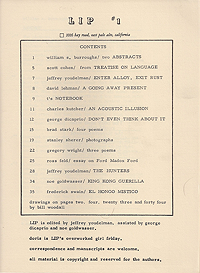 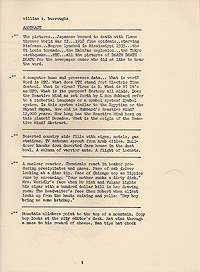 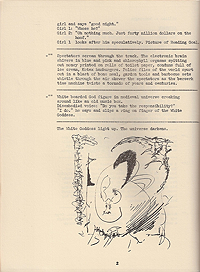 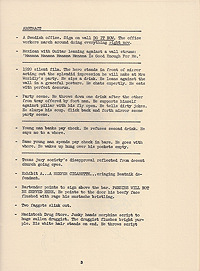 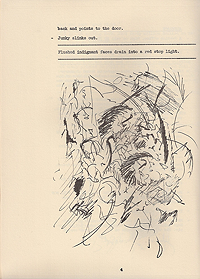 “Abstract” by William S. Burroughs. Introduction by Dave Teeuwen. Thanks to Brian Schottlaender for the bibliography of “Abstracts.” Published by RealityStudio on 20 April 2009.
Cut-Up Dave Teeuwen Little Magazines Texts by Burroughs William Burroughs