Viktor Wynd’s Little Shop of Horrors, situated unassumingly on Mare Street in Hackney, is a beguiling emporium of which William S. Burroughs would no doubt have approved. There are shrunken heads on sale, and sinister bibelots (a Doll of the Dead slumps in her coffin), and Hendrick’s gin is served in teacups. A foetal piglet slumbers on a cluttered shelf, a pair of Labrador testicles float nonchalantly in formaldehyde, and the majestic, taxidermed head of a warthog charges into the luridly painted room where tonight’s lecture takes place. The locale is marvellously apt: like Burroughs, it is “dreamy and innocent”, whilst also being “ravaged and vicious”, and the sense of double exposure explored by Oliver Harris in his dexterous introduction to the recently re-issued edition of Queer is made freakishly palpable by the sight of a two-bodied lamb encased in glass, as well as the bicephalous teddy bears on sale by the till. 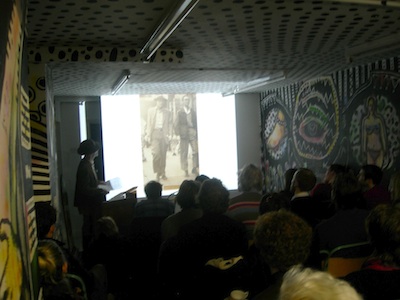 Although the audience is, for the most part, diffident and dishevelled, this is not a coterie evening. The lecture is remarkably well-attended, a testament to the enduring magnetism of William Burroughs, and to the erudition and clarity of vision which Harris brings to the study of his work. Tonight’s discussion centres on the largely concealed production history of Burroughs’ first trilogy — Junky, The Yage Letters and Queer — and on the writer’s excruciatingly literal equation of his manuscripts with his own body.

Harris, a distinctive figure in trademark brown fedora, begins by positing Burroughs as Holbein’s anamorphic distortion in The Ambassadors: “without this ugly act of queer vandalism, American literature makes sense,” he argues, portraying him as an unsettling stain on several canons by inserting the figures of Updike/Bellow and Ginsberg/Kerouac into the painting. The ensuing analysis of Burroughs’ problematic relationship with publication pivots elegantly around a letter to Ginsberg dated April 1952, in which he writes: “in this life we have to take things as we find them as the torso murderer said when he discovered his victim was a quadruple amputee.” The joke marks the advent of the morally indifferent comic-grotesque routine that would become Burroughs’ trademark, appearing at this moment, Harris explains, due to the proposed merger of the manuscripts of Junk (as it was originally titled) and Queer.

Harris explores the “manuscript cannibalism” through which the trilogy came about using for his analogy the vaudeville trick uncomplicatedly known as “Sawing a Woman in Half.” We see Burroughs sadomasochistically playing both the part of the magician and the woman in the box, as he both courts and rails against contradictory editorial demands. The prevarications of the fledgling writer, coupled with his publisher’s querulousness, result in a vengefully strategic deconstruction of textual unity and writerly identity (the Lee of Junky is unrecognisable from the Lee of Queer). Whilst Burroughs’ later work moves from mosaic to cut-up, famously frustrating many readers, Harris repudiates the view that his early works are simple, realist texts, from which the writer veers wildly with Naked Lunch. Fascinatingly, each text in the trilogy is revealed to be a collage, and the corpus of his early work to be quite literally “a body in pieces.”

Written by Rona Cran and published by RealityStudio on 24 December 2010. Photo by Ian MacFadyen. Text originally published at The Literateur.
Oliver Harris Queer

2 thoughts on “Report on a Lecture Given by Oliver Harris, “William Burroughs and the Torso Murderer””