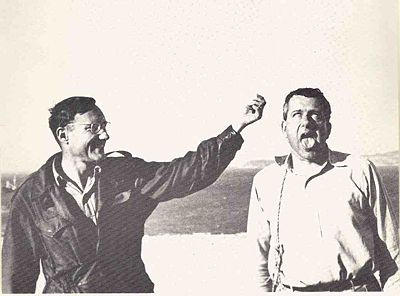 In a previous essay published in Naked Lunch @ 50, I wrote about William S. Burroughs as a Southerner who had grown up with stories of lynchings in Missouri and the connection between those stories and his obsession with hanged men in Naked Lunch and other works. One aspect of this research I never considered was to survey his works for the earliest occurrences and possible origins of his hanging-death-sex trope. As far as I can tell — and my thanks to the admin at realiystudio.org for pointing it out — the first use of this trope is in a passage from Junky, about two thirds of the way through:

I lay on the narrow wood bench, twisting from one side to the other. My body was raw, twitching, tumescent, the junk-frozen flesh in agonizing thaw. I turned over on my stomach and one leg slipped off the bench. I pitched forward and the rounded edge of the bench, polished smooth by the friction of cloth, slid along my crotch. There was a sudden rush of blood to my genitals at the slippery contact. Sparks exploded behind my eyes; my legs twitched – the orgasm of a hanged man when the neck snaps.

Burroughs could have come to this rather specialized knowledge from any number of sources (discussed below), but recently I came across this relevant passage in “Word,” Burroughs’ run-up to Naked Lunch, that points to a specific incident Burroughs was aware of many years before the writing of Junky:

There was this citizen have a circus act, hang himself with a special elastic rope. A dangerous act they tell me, you gotta check the rope for elasticity before every performance. In St. Louis he didn’t check the rope and his neck snapped, he was carried off by leering cops with a paralyzed hard-on

As a scholar on the cusp of the Notes and Queries generation (“X in Y’s work Z”) who has always been fascinated by how much reality underlies Burroughs’ writings, I consulted my premium membership at newspapers.com and found that this passage is indeed based on a real-life 1943 circus accident at a “Wild West” show in St. Louis. Here are some excerpts from the coverage of the accident provided by the St. Louis Star and Times on Oct. 23, 1943:

A veteran performer, who said his family had been in circus work for more than 500 years was listed as No. 13 last night on Fireman’s Wild West Rodeo and Thrill Circus. It was his death number.

Booked as “the man who hangs himself and lives to tell it,” Aloysius Peters, 45, was killed at the Arena, the victim of the leap which he had performed hundreds of times.
Peters climbed to the 75-foot trapeze bar for his act and, adjusting a noose around his neck, plummeted into space before 5,627 horrified spectators.

Always before he had grabbed the rope a second or so before he hit the end of the rope, thus taking the jerk with his arms. Last night he apparently reached for the rope to break the fall a split second too late and was hanged.

The “rope” he used was not resilient enough, his wife said, and put his timing off. Made of strands of rubber covered with canvas, the rope was a new one which he purchased two weeks ago and the war-time rubber, bought in Cleveland, was not the same quality he previously had purchased from London.

When he jumped last night the rope tightened under the impact of his weight, then jerked him 20 feet into the air to dangle like a sack until attendants brought his body down.
[the front page of the St. Louis Star-Times featured grisly photos illustrating the aftermath of his jump and of attendants disentangling the body]
…..

For the first time his wife, the former Catherine Cowdery, failed to watch his performance. An expectant mother, she had assisted with the act until two weeks ago. “I always helped him with the act,” she told a Star and Times reporter, “simply because I didn’t trust anybody else. I remember he worked with the rope all day yesterday on the kitchen floor, testing it again and again. He didn’t say anything about it not being up to standard or I would have insisted he use the old rope and make the usual jump.”
…..
Tears coursing down her makeup, Genevieve Canistrellis declared the entire company considered Peters “a great performer.” Billy Pape said he had a premonition as he went on for this act that something might happen to Peters. Gayly dressed clowns, too, were crying backstage.

The story was also covered in the St. Louis Post-Dispatch and picked up around the country, including by the New York Times, where Burroughs might have read it or elsewhere. I don’t know if he saw the Star Times reporting (probably not) but the story, which is far more dramatic than other local coverage, has elements that would have caught Burroughs’ eye at the time of the writing of “Word.” In the early and mid-fifties, he was haunted by the death of his wife. Queer vibrates with sub-surface echoes of her death and premonitions on that front, including the candy skull scene and the song of the knife sharpener, as well as the shooting of the dangling rat Lee witnesses. Less than a year before Joan’s death, Burroughs’ friend Eugene “Tiger” Terry was also killed in an accident that could have been prevented, mauled to death by an African lion kept as a pet in a south Texas border town (see “Tiger in the Valley” in my biography of Burroughs, The Lost Years of William S. Burroughs; Terry died in Oct 1950 and Burroughs wrote a story about him in 1954). The Star Times story reveals similar tragic circumstances and premonitions: Peters’ wife was uncharacteristically not present at this performance (she was in the final stages of pregnancy), and a friend of Peters says he had misgivings about the performance that night. It was later revealed that Peters had changed the brand of elastic rubber he used in the “rope,” and that the war-time rubber used in it (it was 1943) was probably inferior. 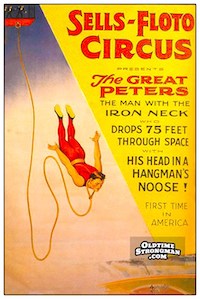 The one element in Burroughs’ re-telling of the hanging which appeared in no accounts of the accident I have found is of course the “hard-on” witnessed by the firemen who handle Peters’ corpse. It is the detail that Burroughs would repeat and poeticize in countless hanging scenes throughout his career, to the point where even Anthony Burgess, an admirer of Burroughs, complained about its continued occurrence in Burroughs’ later work. I’m not enough of a psychologist to begin to speculate on Burroughs’ sexual fixation with hanging, but it does seem to have something to do with the involuntary nature of the erection.

Burroughs was by no means the only author to make note of this involuntary reaction in hanged men, throughout history: Joyce scholars have long pointed out the phenomena in Ulysses and Finnegan’s Wake; medieval, heretical depictions of the crucifixion were censored in this regard. One of the most pervasive images and accounts of the hanged man with an erection involves English highwayman Jack Sheppard, executed in 1724 and celebrated in numerous literary works and drawings. Sheppard was the inspiration for a series of “Wild Boys” books in the 1860’s, such as The New Jack Sheppard, Wild Boys of London, and Wild Boys of Paris. Burroughs’ The Wild Boys (1971) was in turn inspired by these penny dreadfuls.

I assume I’m not alone among Burroughs fans and scholars in that I find pleasure in how his works lead me to rather specialized fields of knowledge, such as how poultry shears are the only implement you should use when severing a finger, or as in the case of “The Great Peters,” that Oscar Wilde was an admirer of an erect, mummified penis found in the very specialized collection of a friend–a penis severed from a hanged man in the eighteenth century.

Written by Rob Johnson and published by RealityStudio on 9 May 2020. Rob Johnson’s latest book is Did Beatniks Kill John F. Kennedy? Bongo Joe’s Requiem for the President (Beatdom Books). He is also the author of the Burroughs biography The Lost Years of William S. Burroughs: Beats in South Texas (Texas A and M University Press).
Rob Johnson