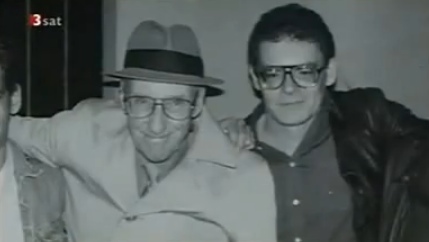 Carl Weissner began corresponding with William Burroughs in 1965. Seeing that Carl was quick to pick up on his experiments with the cut-up, Burroughs decided to visit Carl in Heidelberg. “I am off to Germany next week,” Burroughs wrote to Brion Gysin on May 27, 1966. “Looks like I have a new assistant there name of Carl who is working with recorders.” The visit formed the basis for a lifelong friendship and Carl, who was able to write equally pungent German and English, went on to translate many of el hombre invisible‘s books.

Though his renown came from his translations of Burroughs, Charles Bukowski, Bob Dylan, J.G. Ballard, and many others, Carl was the epitome of a dying breed — the vanguardist. He experimented with language, published little mags, collaborated with other writers, and kept an entire network of correspondents hooked on his remarkable letters. In an interview, Bukowski once described how “a letter from Carl always was and still is an infusion of life and hope and easy wisdom.” Later the same was true of Carl’s emails. They were snatches of literature addressed to you personally. They made you want to save and print them. Often they were passed around among friends.

Carl’s early publications were experiments in fragmentation that call to mind a Burroughs line he was able to recite from memory: “Images — millions of images — That’s what I eat — Cyclotron shit.” Highlights include the collaboration with Burroughs and Claude Pélieu, So Who Owns Death TV? (1967); The Braille Film (1970); and the collaboration with Jan Herman and Jürgen Ploog, Cut Up or Shut Up (1972). In 2009, Carl permitted RealityStudio to publish Death in Paris, an experiment in noir with roots in Thomas Mann’s Death in Venice. In 2010 he published a novel in German, Manhattan Muffdiver, which cast a jaundiced eye on post-9/11 New York. He followed this in 2011 with Die Abenteur von Trashman, a fictive journal of New York in 1968.

Carl was a man of wisdom, gusto, generosity, and biting humor. He passed away at his home in Germany on January 24, 2012. A few years ago he sent an email describing a dream he had of Burroughs:

had a dream in which I’m talking to bill burroughs across my parents’ living-room in karlsruh-on-rhine (carpetbombed 54 times – cincuenta-y-cuatro veces – by gen. curtis lemay and his jolly flyboys). his head exists inside a b&w tv set, in the space where the cathode tube would be, and can be seen only from the side. there isn’t enough space for him to turn his head and look at me. but we haff a lively rap going, irregardless. then his hand (the one with half the pinkie cut off) comes up to his left ear, and he beckons me closer. i hesitate. no, he says, come real close. i do. i now realize that he is indecently good-looking. tanned skin, full lips, loong straight nose. he didn’t look this fetching ten years ago, I say to myself. I bet he got himself a stash of those secret pills from a connection in ciudad juarez… carl, he says and gets totally choked up emotional, this may be the last time you see me alive, sort of… tears are rolling down his leathery left cheek. i’m so shocked i can hardly get a word out. william, i manage to say, it’s not the time for you to die! dammit!… his face begins to flicker, like a bad tv image… then he just fades away, and I’m looking at an empty screen. and an empty set.

Dammit, Carl. It’s not the time for you to die either.

Other Tributes to Carl Weissner

6 thoughts on “In Memory of Carl Weissner”