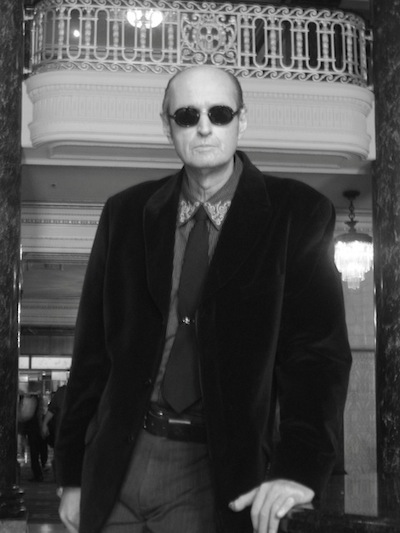 Johnny Strike is a longtime Burroughs aficionado, writer, guitarist, and founding member of San Francisco’s proto-punk band Crime. Strike attended one of Burroughs’ renowned Naropa Workshops and later interviewed Burroughs for Headpress 25: Flicker Machine: The William Burroughs Edition. His own novel Ports of Hell was favorably blurbed by the master himself. In this interview, Strike speaks of his encounters with Burroughs, Huncke, Bowles, and Choukri and the influence that Burroughs has had on his life, art and music.

When did you first encounter the writing of William S. Burroughs: was it — like many of us around the world — through Naked Lunch?

No, I was an avid reader of mysteries, and some literature. In high school I came across The Ticket That Exploded from the Nova Trilogy, and it twisted my mind in a very good way. Later a boy I knew became badly strung out on dope, and I visited him in his seedy room with another friend who was making arrangements to get him into a live-in drug program. I noticed a copy of Junkie among his things. Maybe a year later I read Naked Lunch which was like taking some insanely powerful drug that hooks you forever.

What would you regard as your favorite Burroughs text and why that one in particular?

I’ve thought about this over the years and at different times different books have been favorites, and in way it’s one long book. I know other aficionados don’t agree with me, but when all is said and done, I see the Red Night Trilogy as the final masterpiece from the old magician, a boiling down of his life’s work, all he’d learned, everywhere he’d been, all in those three fantastic books. I’ve read them countless times. I can pick any one up, randomly turn to a page and be blown away by the ideas, the power he wielded in his work, and the language he was a master of; out of the three, The Place of Dead Roads is my personal favorite.

What influence would you say that Burroughs has had on your own writing?

At first too much, but if a writer today claimed not be influenced by him at all I wouldn’t be much interested in what they were doing. Burroughs wrote something to the effect that you and you alone can write your own particular books, and once a writer learns that, his own voice becomes apparent.

In your Interview with Herbert Huncke you mentioned attending one of William S. Burroughs’ workshops at Naropa — what were your impressions of Burroughs as a teacher?

Jack Kerouac said he was the Teacher. In my experience, he was the only teacher who really mattered. There was no annoying ego, just honesty, creative thinking, a wealth of information on all his interests, and a great sense of humor.

How did your encounter with Herbert Huncke come about?

I attended his workshop at the Kerouac Conference in Boulder in 1982 and afterwards introduced myself, and arranged to interview him where he was staying.

The argument I put forward in my examination of Herbert Huncke’s notebooks was that Huncke was a much-underestimated and often overlooked member of the Beat generation. Having met Huncke yourself, would you agree or disagree?

I would agree. Highly underestimated.

You mentioned in your interview with Huncke your own encounters with junk. Both Burroughs and Huncke were often asked about the connection between junk and creativity. Do you feel that it enhances the creative process or is this just a dangerous liaison?

Everything influences a writer in some way, and everybody is different, but for me ultimately no, nor drink or any other heavy drugs. I must get myself into a kind of trance, to tap that inner voice; a cup of coffee, a little pot does the trick for me.

How did your encounters with Paul Bowles and Mohammad Choukri come about?

On my first trip to Tangier I bumped into someone in a cafe who knew Choukri. A few nights later I got drunk with him and we discussed literature. He gave me Paul’s address although they were on the outs. Bowles was in bed and so hard of hearing I had to speak my questions into his ear. On a return visit to Tangier I meet someone else in a cafe who had Mohammed Mrabet’s address out in Souani, so my Moroccan friend Taib and I took a cab out there. What followed was an afternoon of kif smoking, mint tea drinking, and many tall tales from the colourful Mrabet.

Burroughs’ childhood reading drew upon a wide range of influences notably that of Jack Black, that archetypal picaresque anti-hero who would serve as a model for so much of Burroughs’ own writing. Were you, like Burroughs, subject to any particular childhood literary influences?

Adventures, surely that’s where I picked up my interest in exotic locales, and fantasy. As a teenager, mysteries, thrillers. All of that is still present in my work.

What prompted you to begin writing as a sustained pursuit — was there a particular turning point or event or was it a discipline you have always practiced in one form or another?

I wrote off and on from childhood. I did give it up at times, and sometimes in disgust, but I always knew I’d go back. Eventually it stuck.

What do you think William S. Burroughs’ ultimate legacy will be?

Someone said mapmaker for the 21st century? I like that. Definitely a prophet. He’s one of the few who will continue to inspire others to transform, and develop their own maps of inner space, in multiple forms. He changed literature, no mean feat.

You have been involved in the music scene for many years. How and in what ways do you think that your music has informed your writing?

Anything I do is experience for writing. Music is writing, and writing is music.

Did Burroughs also influence other members of Crime?

Not to the same extent. Hank [Rank] of course had read him. Frankie [Fix] name-checked him in a song because I was obsessed with his books. I remember rolling my eyes, but that tune gave us our biggest pay check, and funnily enough for a sneaker commercial just like Burroughs! For the 50th anniversary of Naked Lunch 2009 here in San Francisco the current Crime calling itself Remote Viewer provided sound (incidental / guitar / tapes) during my reading of the hanging segments, which I’d picked at random.

To him it meant a prison punk, once he understood he became the darling of the punk circuit and quite enjoyed himself from all the accounts I’ve read.

Interview by Marcus D. Niski and published by RealityStudio on 15 May 2012. Photo of Johnny Strike, St. Francis Hotel, San Francisco, May 2010, by Gregory Ego. Johnny Strike’s book Ports of Hell was recommended by William Burroughs himself. His recent books include A Loud Humming Sound Came from Above, The Exploding Memoir, and Name of the Stranger. Johnny also co-authored (with Gregory Ego) “The Burroughs Brain Machine,” an interview with Burroughs, for Headpress Journal 25.
Herbert Huncke Johnny Strike Naropa

2 thoughts on “Interview with Johnny Strike”