Photographer and Blondie Cofounder on the Man He Considered a Mentor 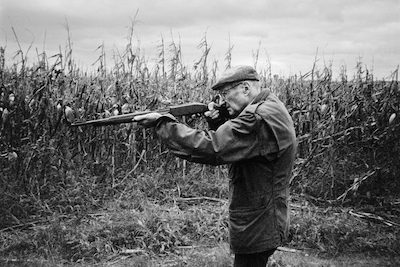 Though best known as the cofounder and guitarist of Blondie, Chris Stein is also a photographer. While cowriting tracks such as “Rip Her to Shreds” and “Heart of Glass,” Stein was busy pointing his lens at friends, bands, and the downtown scene in New York City. His work ranges from moody streetscapes to glamorous shots of bandmate and former romantic partner Debbie Harry. It furnishes an insider’s point of view on the beginnings of the punk scene and its interactions with iconic figures such as David Bowie, Iggy Pop, and Andy Warhol.

Stein also documented visits with the man he called a mentor, William S. Burroughs. His book Point of View: Me, New York City, and the Punk Scene happened to include a photo of the bookshelf at Burroughs’ home in Lawrence, Kansas. Michael Stevens microanalyzed the titles on the shelf for his ongoing effort to map Burroughs’ reading. Finding it “remarkable” and declaring himself “fond of Internet feedback loops,” Stein agreed to answer a few questions for RealityStudio about his relationship with Burroughs.

You’ve always struck me as a guy who probably reads a lot. Before we get to Burroughs, what sort of books interest you?

Were you interested in Burroughs and his writings before you had the chance to meet him?

I read Junkie as a kid and was very embedded in the tone. I had one of those old double paperbacks.

What about the Beats in general — were they a source of inspiration for you?

My parents were reds / borderline beatniks. I knew who Ted Joans was at age 11. They had his poetry books

Do you recall where you first ran into Burroughs’ work? Was it the novels? Did you encounter him in the New York zines that thrived during the 1960s and 1970s?

In Report from the Bunker, Victor Bockris describes a dinner you had with Burroughs. Did you first meet Burroughs through Bockris?

Yes, we met through Victor then I visited him on tour in Kansas. His house was quite spartan and maintained the vibe of a bygone era. The only thing I recall by way of wall decoration was a Gysin calligraphic drawing, maybe a calendar.

Burroughs has been called the “Godfather of Punk.” What would you say he represented to the punk movement?

When I was with him in Lawrence he was accepted by the local rock punk kids who hung out at the local club, the Outhouse. In NY there was an overlap with the various art scenes, music, writing. Everybody was aware of Patti and Television’s literary referencing. I was also a big fan of the Fugs from way back.

Your photography practice seems more in line with Allen Ginsberg than with Burroughs. Was Ginsberg’s photography of interest to you?

I didn’t know Allen well and only became aware of his photography in later years.

Did Burroughs attend any of your gigs or express interest in your music?

I’m gonna say yeah. I know he was aware of the music.

On YouTube there’s a quirky video of you and Burroughs having a conversation about war. Why war? What’s with the leggy models walking through the scene?

That was for Andy’s MTV show hence the models. Bill and I had a shared fascination with weaponry. We’d been shooting a Derringer prior to the interview. I gave him several knives over the years.

You’ve said that Burroughs became a mentor for you. What was it like to have him as a mentor?

He was very calm and measured and no bullshit and that was nice to be around. Also I was a recovering addict when I knew Bill. We had a methadone program in common. I eventually wound up with Bill’s methadone doctor, Harvey Karkus, who was great.

In 1996 you performed at the Nova Convention Revisited. Was that a special moment for you to honor Burroughs and your relationship with him?

We played at various Nova-related events, at the actual convention that was I think in Kansas. I guess that probably the last time I saw him. I was lucky to have been able to know him at all.

What was your reaction on learning of Burroughs’ death in 1997?

He seemed like one of those guys who would last forever. A surprise. I consider myself very fortunate to have been able to hang out with Bill. He was a wonderful guy. 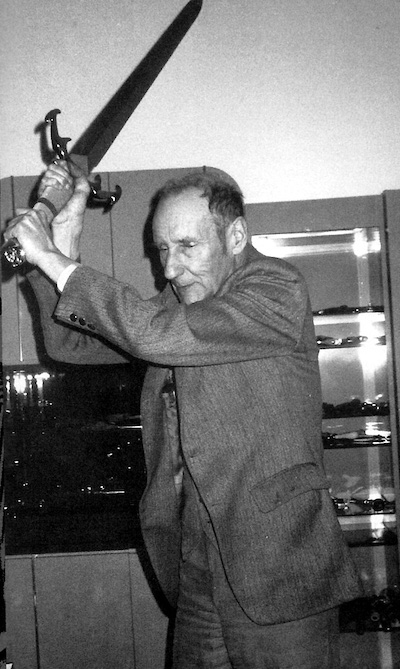 Chris Stein: “This photo by Victor Bockris that you’ve likely seen around is at our house. Bill is wielding my Tom Maringer large custom sword.”
Many thanks to Chris Stein. You can see more of his photography at his website or in his book, Point of View: Me, New York City, and the Punk Scene. Published by RealityStudio on 18 September 2021.
Blondie Chris Stein Debbie Harry

1 thought on “Interview with Chris Stein on William S. Burroughs”