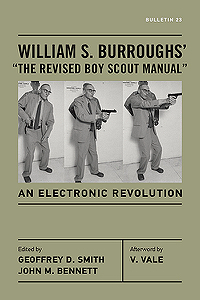 “Lost Masterpiece Rediscovered” claims the blurb on the cover of William S. Burroughs’ “The Revised Boy Scout Manual”: An Electronic Revolution. Without criticizing the marketing team too much, “lost” should be “previously unavailable but long known to exist,” since an excerpt was published by Re/Search in 1982. “Masterpiece” should be “pretty interesting text well worth adding to the Burroughs canon.” Naked Lunch was a masterpiece. RBSM is more along the lines of Electronic Revolution (hence the subtitle) or The Job. The text is funny and prescient. It can also be tiresome and repetitious. That’s why it’s interesting but not a masterpiece. Lastly “rediscovered” should be “cobbled together from multiple sources” that include not only typescripts but audio recordings. The cobbling was well done by editors Geoffrey Smith and John Bennett for the Ohio State University Press.

RBSM will be familiar reading to anyone who has perused more than a couple of Burroughs’ books. Written around 1970, it contains all the iconography el hombre invisible was working with toward the end of his stay in London: cut-ups, Scientology, Korzybski, the Mayans, Hassan Sabbah, the “discipline of DE,” tributes to Brion Gysin. The text isn’t a cut-up but it does contain different types of writing. It begins with a plan of action for overturning British society. Burroughs advocates (or does he?) various forms of violence. Assassination By List (ABL) is to make a list of the “secret controllers” of society and kill them. “The list is guess work of course, but the real higher-ups will soon expose themselves. So for a start we assassinate a Swiss banker — never go wrong on that.” Random Assassination (RA) is an “ingenious concept” apparently formulated by Gysin. “Five people a day in five districts of a city are killed. Category of person and district are determined by lot… Exempt from this daily lottery are the police and the military. The reason they are accorded this position of privilege: to stir resentment in the populace.” Throw in handguns, homemade weapons, bombs, chemical and biological weapons. Burroughs even proposes to release wild animals as a way to sow chaos.

Having offered up these techniques for overturning British society, Burroughs proposes using them on his homeland — “Now it isn’t every country has a sitting duck like the Royal Family. Bugger the President doesn’t make it at all. The script is quite different for the United States of America.” — and then the world. Routines, black humor, and Burroughs’ inimitable ear for dialogue liven up a text that might otherwise call to mind The Turner Diaries or an alt-right screed. Burroughs finishes this vision of violent overthrow about half way through and then turns to the area where he was genuinely prophetic, what he calls the “weapons of illusion.” “The weapons I wish to advocate are weapons that change consciousness — cutups, scrambling, use of videotapes, etc.” Burroughs writes about tape recorders deployed to escalate riots, speech scramblers used to misrepresent information, and so on. While diehard Burroughsians will already be familiar with these procedures from Electronic Revolution, Blade Runner, “The Invisible Generation,” and other texts, it shouldn’t take away from the fact that Burroughs was uncannily right about the capacity of media to manipulate and be manipulated. As V. Vale remarks in an afterword, Burroughs conceived of “fake news” long before it entered into the national discourse.

In his introduction, Bennett asks “Did Burroughs Have a Plan?” (No.) Similarly, one is tempted to ask, Was Burroughs serious? Did he really mean to advocate for the violent overthrow of society? As with the biography Literary Outlaw, a photo of Burroughs with a handgun graces the cover of The Revised Boy Scout Manual. Such photographs, as well as the countless narratives of “I went to Kansas to shoot with Burroughs,” are intended to portray the man as a bad ass. Doubtless he was a bad ass but it is hard not to suspect that his fetish for weapons was precisely where his vulnerability showed through. Here was a man who deeply regretted the shooting death of his common-law wife Joan Vollmer. You’d think that he would have sworn off firearms forever after — but instead he doubled down on them. He fired at the wall of his room in Tangier while writing Naked Lunch. He kept a gun at the Bunker in New York. He made “shotgun art” while living in Kansas. What kind of guy commits a dumb, drunken murder then continues to tempt fate by keeping weapons to hand? A deeply insecure, vulnerable, frightened human being? “I got the fear!”

It is worth bearing this in mind — that the man advocating for three forms of assassination (ABL, RA, and MA or Mass Assassination) was one who felt great contrition for the lone death that he actually caused. It suggests that he means something other than what he writes. It shows that his purpose is satirical and that he feels himself at war with society. It makes sense. Society oppressed the freedoms that were important to him, notably homosexuality and drugs. Burroughs admits as much at the very end of RBSM. “Mass Assassination I have described as a utopian fantasy.” He sensibly adds that the fantasy is “based on the observation most of the trouble on this planet comes from about ten percent of the population. If these obstructions were summarily removed we would all feel a great deal better. However in practice MA has usually been taken over by precisely the undesirable ten percent… so it is to be regarded as a highly dubious maneuver.” He’s damn right about that. As for his utopia, he offers up two different types. One is made up of MOBs, those who practice the My Own Business approach to human affairs. The other is all male. You can almost hear the Oedipus complex leaking out when Burroughs has Herr Doktor Kurt von Steinplatz comment, “To be without womans is to be without fear — is it not?”

As for the apparatus of the book, there are pros and cons to it. The editors should be commended for documenting their work in footnotes so that readers understand how the text has been processed. The book begins with a foreword by Antonio Bonome. Hardly a household name, Bonome will surely alienate a few potential readers with academic claptrap that should have been consigned to the “trying too hard” file. It’s a horrible way to start off. Editor Smith follows this up with a “Brief Textual History” which, like the legend on a map, helps the reader get a bearing. Editor Bennet follows with yet another introduction that catalogues the different styles of text found in RBSM. At end V. Vale of Re/Search contributes an afterword — a charming read by a guy who has anecdotes about Burroughs, a history with the text, and a light touch in his prose style. Vale’s afterword clearly should have been the foreword. It’s engaging and Vale has bona fides that might actually mean something to people. Here’s the structure that could put RBSM on the bestseller list: Vale, Burroughs, “Brief Textual History,” footnotes, and leave the other texts for academic journals.

In the end, it is fair to say that RBSM is classic Burroughs. It is hysterical and wise at its best. At its worst, it shows Burroughs’ faults — repetitiousness, for example. Or his enthusiasm for sometimes bird-brained ideas, which can generously be regarded as the downside of his willingness to take intellectual risks. Will it change anyone’s conception of Burroughs? No. Is it a masterpiece? Hardly. Was it worth publishing? Emphatically yes — not only because it merits a place in Burroughs’ published work but because it offers a way to understand and resist what’s currently going on in America. Burroughs’ achievement in RBSM and related works was literally to predict the future of communication, foresee how it could be used for control, and to invent techniques for regaining individual freedom. “SLAUGHTER THE SHITS OF THE WORLD,” Burroughs shouts. “You know who they are in America.” He gives a list which is different from ours but no matter. We know who the shits are today. We could all learn a thing or two from Uncle Bill about how to deal with them.

Written and published by RealityStudio on 25 June 2018.
Editor William Burroughs