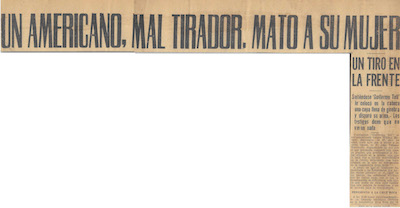 This is a document from RealityStudio’s collection of primary source documents relating to the death of William S. Burroughs’ wife Joan Vollmer Burroughs. This clipping comes from an unknown newspaper, probably published on 9 or 10 September 1951.

An American, A Poor Shot, Kills His Wife

Bullet In The Forehead

Feeling like a “William Tell” he placed a glass of gin on her head and discharged his weapon — The witnesses say they saw nothing.

Believing himself “William Tell,” the American William Seward Burroughs, 37 years old, killed his young wife, 27, Joan Vollmer Burroughs, last night. He shot her with a bullet intended to break a glass of gin that he had previously placed on her head. The bullet mortally wounded her in the forehead and she died an hour later in the emergency room of the blessed Red Cross.

Despite the fact that the murderer has declared to the authorities that there were several people in the room where the incident occurred, the purported witnesses affirm that they did not see anything. The investigation will be even more difficult since none of them knows how to speak a single word of Spanish and are not making themselves available for questioning.

At The Red Cross

The emergency personnel found Mrs. Joan Vollmer Burroughs sitting in a small armchair covered with pink cloth, with blood flowing freely from a wound on her forehead. To the right of the chair, a cane that the American woman had to use was lying on the floor. Childhood paralysis she suffered many years ago did not allow her to walk well.

When the doctors received the injured woman in the emergency room, they realized the seriousness of the case and called the Public Prosecutor, Luis Hurtado Baca, to be in charge of interrogating her, which was impossible, as the woman died within moments. She was given blood transfusions, medicines, and oxygen, but all efforts were useless. She died an hour later.

The body was taken to the Amphitheater to send to the Juarez Hospital, where doctors will perform an autopsy.

At that moment the lawyer Bernabé Jurado arrived. He is a personal friend of the wife killer and will be in charge of the defense. He spoke with his client and gave his version of events to the lawyer Luis Hurtado Baca, claiming that the gun had fallen to the ground and the bullet had embedded itself in the forehead of the wife. However, the first statement prevailed, and so it will be recorded in the respective minutes.

In The House Of The Incident

We visited the house where the incident occurred at Monterrey 112 [sic], apartment 10. Its tenant Johnny Healy was extremely nervous. Nearby was Mrs. Juana Peñaloza, in charge of the building.

On the chair where Joan fell mortally wounded, there was a blood stain; on the floor, three ashtrays complete with butts, one more on a table where there were three glasses containing alcohol residues, American magazines, two valises on a sofa and a small wicker trunk.

On a large dining table, there were four empty bottles of Black Bear gin; about ten or twelve glasses with alcohol stains; a 380-caliber Star pistol; more cigarette butts in the ashtrays and thrown on the floor, and the glass that served as an apple to the modern William Tell.

In a closet, there were no less than thirty empty bottles.

Mr. Healy said that he was not present at the time of the events and that he had not noticed anything. However, he could not say how it was that the two people were in his apartment, since he claimed not even to be friends with the Burroughs couple.

He was made to understand that it was difficult to deceive the Mexican police, but laughing, he said he did not know how to speak Spanish and did not understand the English with which he was addressed.

Trying to cause confusion, he claimed that Joan arrived at one o’clock in the afternoon in search of Mr. Herman who had arrived at the apartment yesterday. Twenty minutes later her husband came too. As Healy had to go out, he left the Burroughs couple in his apartment and did not know anything until that night, when he returned and was informed what had happened.

The police also interviewed Johnny Herman, who said he did not know anything at all.

Among Americans and neighbors of the house where the tragedy occurred, the theory began to circulate that the tragedy was caused by jealousy.

It was said that Joan used to visit Healy in his apartment, although he claimed yesterday that she was looking for Herman and he did not know her before. Herman, meanwhile, said that he did not know Joan but that she had gone to visit Healy, who was good friends with her and her husband. In the past they had known each other both in this city and in Guadalajara.

The judicial personnel continued last night carrying out its investigations in order to clarify who the eyewitnesses of the tragedy were and to prevent William’s alibi from taking effect due to lack of evidence to the contrary.