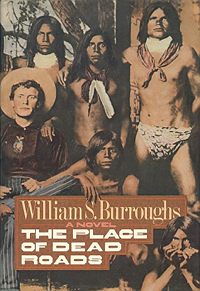 New York: Holt Rinehart & Winston 1983, an edition of 300 copies signed by Burroughs, issued in slipcase without dust jacket. Burroughs enjoyed reading about the American West of frontier days, and he uses that setting as the basis and background, and in a sense the springboard, for this book.

_____ variant issue of first printing of the trade edition, quarter bound in an orange-brown cloth, spine titled in metallic silver, light brown textured paper-covered boards, hardbound in dust jacket. The text block and dust jacket are the same as above. Published priority is not known but paper covered boards are less commonly found.