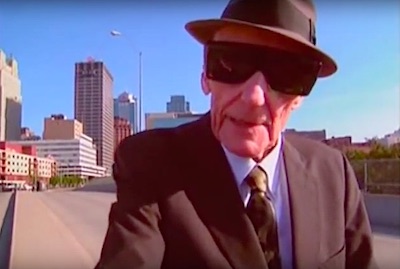 “Panic” by The Smiths fades into Richard Hell and the Voidoids’ “Love Comes in Spurts.” And we are off deep into the soundtrack of Interzone at the Meet Café somewhere off the beaten path in the City Market. It takes a lot to get me out and about after hours nowadays but I might be coaxed to attend a vinyl night now and again at a local watering hole. There is something about spinning vinyl that tickles the collector in me. Planned Obsolescence is a gas and I love dead technology but old vinyl will never die. The collectors will keep it alive. God bless them.

When you talk about My Burroughs, one of my favorite images of Burroughs is of him and Ian Sommerville putting down tracks on The Beatles’ dime in the Abbey Road Studios dedicated to Zapple, the spoken word/avant garde arm of Apple. DJ Sommervile and MC Bill scratching and inching tapes with giant joints smoking in the ashtray on the mixing console. What a fucking trip!! Burroughs is everywhere even in the world of rap and DJing. It is impossible to think of the concept of sampling without touching on the poetics of Burroughs. And of course Burroughs was there first if not with two turntables and a microphone but instead with a scissors, a Stanley knife, and some audio tape.

It is not enough to attend and enjoy a DJ set, I have to read about the history of the DJ in order to contextualize it all. Last Night a DJ Saved My Life: The History of the Disc Jockey by Bill Brewster and Frank Broughton is a good place to start and follow that up with Tim Lawrence’s Life and Death on the New York Dance Floor. Burroughs is in the index of Life and Death lurking in the shadows of The Mudd Club. Even if Burroughs hated rock music, he could not resist a good scene. Both of these books are fantastic, well-researched histories of DJ scenes, but for me the most enjoyable part of them is the DJ set lists they include. So you can find the selected discography of Anita Sarko at The Mudd Club circa 1980-1981, when Burroughs could be found in the audience, and then pop over to YouTube and schlup Anita and play her set. The sounds of Joy Division‘s “She’s Lost Control” and Iggy Pop’s “Lust for Life” come on and things get a little Burrougshsian. I recommend these books for the set lists alone. You can go down the rabbit hole and suddenly it is dawn and, like the club goers at The Roxy, you head out the door looking for breakfast, your next fix, or the next party.

Spinning through a set of Mark Kamins and Sean Cassette at Danceteria from 1980, I wondered what a Burroughs set would sound like. The possibilities are as vast as the entire library of recorded music. Do you spin Burroughs’ mix tapes, the music influenced by Burroughs, the music Burroughs listened to? Or maybe you try something different but still unmistakably Burroughsian. Here is my set. Come up with your own and we will post it on RealityStudio in order to get the Mugwumps on the dance floor at the Café Meet.

Don’t Hide the Madness: A Soundtrack

When Conrad Knickerbocker inventoried the St. Louis hotel room of William S. Burroughs on New Year’s Day 1965, the first item he listed was a transistor radio. In my mind Burroughs always had a radio nearby, to commune with the ghosts behind the shortwave static, to use as a tool to uncover the truth hidden in a layered audio cut-in, or maybe just to listen to the news.

This playlist collects the popular songs of the day as determined by Billboard—the unavoidable pop that dominated the airwaves—that Burroughs might have scanned past while turning the radio dial at key moments in his life and career. The dates aren’t arbitrary. They’re stolen from Jed Birmingham’s exploration of Burroughs’ life as a sequence of pivotal moments. Those days and events shaped the Burroughs we know and remember. This is the music that was in the air.

A crystal radio set Bill leaned touching dials “Do you hear anything?” – “Yes static” – “Good” – so we’ll sing one song until some metallic staccato voice or long long radio silence explodes the players and the premises to take it all the way down, a voice that no one could connect to the speaker or recognize on hearing it again to find out more about the nervous system and gain control over your reactions – “I hear music ten years from now and listen at once” – through areas where popular tunes are waiting for the sunrise of cosmic laughter – “I’m trying to fix it so we can both listen” – all popular songs using music as punctuation, through streets of music trailing melodious propositions or the metal music of space – “now listen to this”:

Written by Jed Birmingham and published by RealityStudio on 28 July 2018. Updated with playlists by James Adams and Michael Stevens on 31 July 2018.
William Burroughs

4 thoughts on “The William Mix”