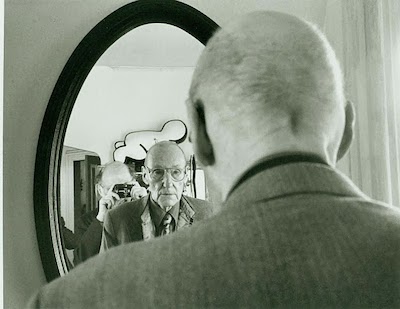 Zoom in on 1980 in New York City. Debbie Harry is in the stalls of the Bunker belting out “Picture This”: “All I want is a photo in my wallet / A small remembrance of something more solid / All I want is a picture of you.” Chris Stein flips through some LPs, picks up Call Me Burroughs, drops the needle on the turntable: “Millions of images that’s what I eat.” All right, Mr. Van Sant, we are ready for the close-up on Burroughs and photography. It is 1980 again. Flashback to New York City. Burroughs and Susan Sontag are having dinner. They talk of Beckett and writing. Two great passions of Burroughs. But did they speak on photography? How could they not with that pest Victor buzzing around the apartment. The click, click, click of the shutter like the ticking of a clock. And time stands still in a flashbulb of orgasm. It is enough to make one mad. “Bill!! Bill!! Susie, turn over here, look here, put down your soup spoons, smile, say cheese!!”

It was Allen Ginsberg who worked briefly in the PR industry. It was Ginsberg who was the Beats’ PR agent. It was Ginsberg who took many of the most iconic photographs of the Beats from before they were “The Beats” through their glory years and into their golden years. Yet it was Burroughs who best theorized the meaning of all those photographs. He did not explicate the individual history of individual snapshots as did Ginsberg in his captions. He did not provide names and places and dates. Instead he provided a theory of the meaning and power of images. In addition, unlike the other Beats, photography was a key component to his writing process. As Burroughs’ early photo-collages from Tangiers demonstrate, photography was a means to visualize Interzone, the Burroughsian universe. Currently Ken Lopez is offering for sale a fascinating archive of photographs from Burroughs’ personal collection, which once again proves that Burroughs used photography for the conceptualization of, and inspiration for, his writing. 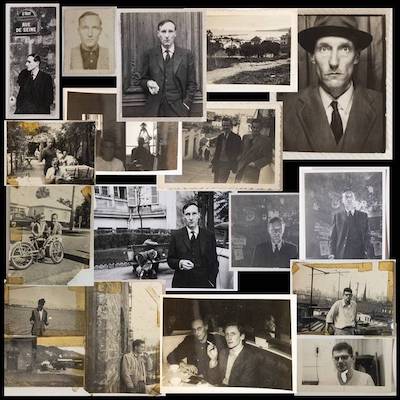 Burroughs also practiced what he preached. As Taking Shots: The Photography of William Burroughs demonstrated, Burroughs knew his way around a camera. In fact, I find the self-portraits Burroughs took in 1964 in Tangier to be some of the most interesting portraits of Burroughs ever taken. And that is what I am going to discuss over the next few weeks or so in celebration of the photo archive recently made available by Ken Lopez. Photographs of William Burroughs.

I will use the word “image” a lot in the pieces that follow but this list is not the top 10 images of Burroughs. It is the top ten photographs of William Burroughs. So no stills from the cut-up film Bill Buys a Parrot or Towers Open Fire or of Tom the Priest from Drugstore Cowboy. No illustrations of Burroughs either. No R. Crumb here. Also no doctored or edited images of Burroughs so that leaves out many of the images of Burroughs on dust jackets and posters and flyers. If you love that pic of Burroughs on the cover of the 1964 Calder Naked Lunch — and please know that I love that Frankenburroughs as well — you will not read about it in what follows. Sadly that also holds true for scrapbooks and collages even if they feature a photograph of Burroughs. So the important early collages Burroughs made in Tangier in 1954 as he was developing his concept of the Composite City that were offered for sale by Brian Cassidy in the late 2000s will not be on the list. Sorry I do not make the rules. Well, I guess I do. Because I will definitely play Benway and doctor my share of photos in order to capture the essence of a particular Burroughs photograph. Once again sorry to break my own rules.

So after all that what WILL you read about. Photographs taken of Burroughs by other photographers to be sure. From Allen Ginsberg to Gerard Malanga to Peter Hujar to Richard Avedon to Annie Leibovitz. All the modern masters are fair game; there might be some amateurs as well. Well to be honest, I might not know the photographer or the history of the photo at all. I am just a hack and a humble content generator. You are getting this shit for free and not paying a king’s ransom for some obscure academic journal or overpriced university press title. You get what you pay for. If you want the real poop, the holy shit as it were on the photographs of Burroughs, you have to read Oliver Harris, like with everything Burroughs. Harris made his big splash in the scholarly world with The Secret of Fascination, which features a bravura reading of Ginsberg’s photograph of Burroughs in the Egyptian Room of the Metropolitan Museum. The photograph is on the dust jacket and frames the entire book. I cannot compete with that. Harris is the world’s greatest mythbuster when it comes to Burroughs and photographs are one of the key components in the creation of myth so it should come as no surprise that Harris built a career on reading the photographs of Burroughs. Recently he wrote on the series of photographs taken of Burroughs in Paris in 1959. The essay is, well, fascinating and a must-read, if you can find it.

That said, I hope that my list has some degree of novelty if lacking in academic rigor. My heart is in the right place if my brain cannot follow it. This is like a coffee table book; not an academic monograph. What I aim to do is create a top 10 list of Burroughs photographs organized around the principle of image clusters. Think of those word associations that so troubled Burroughs. The organizing principle could be a year, say 1953, or a place, say The Beat Hotel. Or a topic. So maybe just maybe all you animal lovers might read about Burroughs and cats. But I doubt it. I do not know if all this makes sense but hopefully it will become clearer as I post the essays and captions. In the meantime, turn on your computer or get on your phone or, gasp, flip on your printer and generate some good old hard copy, and sit down with a beer and a bowl of Tostitos and scoop out some queso and dig in and eat some images. Say cheese!!! 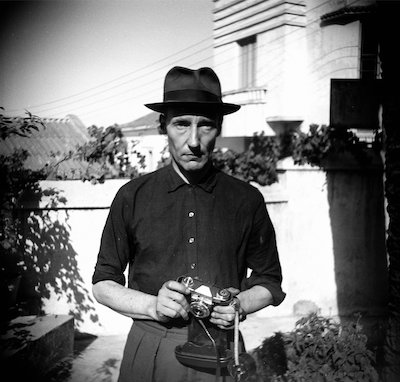 Written by Jed Birmingham and published by RealityStudio on 31 March 2019.

1 thought on “The Visible Man: A Coffee Table Zine of Photographs of William S. Burroughs”