#19 – Cyclops 1-4 (1970). An Installment in Jed Birmingham’s series of the The Top 23 Most Interesting Burroughs Collectibles. 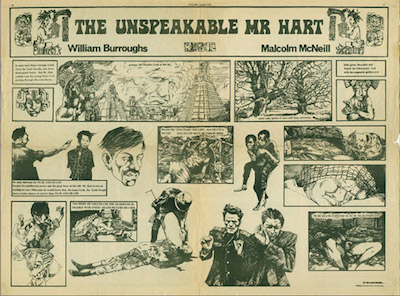 Nobody has browsed the stacks of the Library of Interzone for decades; its location flickers like light through a Dream Machine. A few claim to have seen this memory palace while blissfully on the nod, yet the Person from Porlock always seem to knock just as the relics from the library come into clearest focus. Of course every bibliophile knows that the Person from Porlock is merely the Man who has kept one waiting in the first place. The Library of Interzone is a cabinet of curiosities filled with bibliographical unicorn horns and nails from the true cross. Earlier than firsts and beyond the limited, the imaginary and the mythic line shelves that stretch like a moebius strip onward into infinity. Is that even possible? If not, a fitting design for a library housing the unrealized and unrealizable.

There you would find a complete run of Burroughs’s little magazine, Interpol, published out of Room 15 of the Beat Hotel in the late 1950s and distributed by Burroughs personally from his usual table at La Palette and just up the street at the English Bookshop. Drenched in junk and steeped in funk, Interpol was printed by fellow Beat Hotel resident Piero Heliczer as one of the early efforts of his Dead Language Press. Somewhere on these endless shelves would be a copy of the hors de commerce edition of The Third Mind, published with great expense and much pomp and circumstance by Grove Press as an art book in 1966. The book is lavish and an example of corporate publishing excess complete with fold-ins, cut-outs, tipped-in manuscript pages, photographs and strips of film, as well as original artwork by Brion Gysin. As such it brings to mind Andy Warhol’s Index Book, published by Random House in 1967 or his Screen Tests/A Diary published by Kulchur Press that same year. The Kelmscott Chaucer of the Library of Interzone is definitely the deluxe edition of Ah Puch Is Here complete with illustrations by Malcom Mc Neill, in a limited edition of twenty-three copies containing tipped-in manuscript pages with holograph text by Burroughs and original artwork by Mc Neill.

The Library of Interzone is speculative and spectacular; my humble list, while no doubt dealing with rarities, remains all the same chained to reality. So instead of handling a fully realized Ah Puch Is Here, I have to lower myself to the actual and get my hands dirty with newsprint, settling in with reading Burroughs and Mc Neill’s collaboration, “The Unspeakable Mr. Hart,” in Cyclops, the first English adult comic paper. Sure, one can admire Mc Neill’s illustrations in isolation, which decades since their initial impetus now hover in the shadows of the white cube, just barely getting a foot in the door of the gallery system. And yes, brief snatches of the collaboration appeared in 1977 in the pages of Screw, but that is just a peep show at the Deuce, when compared to the full Gesamtkunstwerk.

For me the strips in Cyclops provides the most tantalizing of teases about what a fully realized Burroughs and Mc Neill collaboration might have achieved. “The Unspeakable Mr. Hart” is no doubt a pale reflection, almost a silent film version of the big budget spectacular, but like a classic movie from the silent era such as Metropolis, all the elements of a film such as Blade Runner are there, just not with the technological sleight-of-hand. It could be argued that “The Unspeakable Mr. Hart” is all the more charming just because it does not get buried in the pyrotechnics of bloated corporate publishing. The same holds true for Metropolis. As such a mimeo edition of The Third Mind would be superior to a deluxe art book edition. If not as aesthetically pleasing and visually arresting, it would be more in the spirit of things. I certainly feel this way.

My appreciation for Cyclops is all about context, not content. There is something about seeing Burroughs / Mc Neill in a struggling adult comic paper, one that ran for only four issues from September to October of 1970, which really appeals to me. I am generally indifferent to the underground press, a network of newspapers, news syndicates, and comics, which for a brief period in the late 1960s / early 1970s provided a serious and much needed alternative to the mainstream media. Burroughs was a fixture on this circuit during its glory years. Later in life Burroughs appeared on TV, in film, in commercials, and even jammed with rock stars. And it could be argued that he was by this point in his life a figure of popular culture rather than a cult hero, but for me, Burroughs was never more popular, more in the public eye, than in the period from 1967-1970, when he was a regular fixture within the pages of Rat, International Times, and Georgia Straight, to list the underground papers to which Burroughs was a semi-regular contributor. Sure there is jamming with Kurt Cobain but there is also appearing on the cover of the Beatles’ Sgt. Pepper. Yes, Cobain is an icon and Nevermind sold millions of copies, but never was rock music listened to as closely and with such obsessive expectation as with the late albums of the Beatles. And that includes the conspiracy theory loving listeners of Cobain.

On a similar note, Burroughs never held the public’s attention in quite that same way as he did in the late 1960s and the general public was never again so open to listening to him. Readers hung on and analyzed every word. During this brief window of opportunity, he was as much a prophet and philosopher as he was a novelist. Burroughs took advantage. And paradoxically that might be the problem for me. Burroughs’ stance as prophet is tainted by profit and he becomes a pundit. By 1967, Burroughs was too popular and as such too accessible. Even more damning, he was too accommodating to his newfound readership. His editing of the cut-up novels prove that Burroughs had a serious case of rabbit ears, which great artists simply cannot and do not have. Great art is like gambling; the best strategy is to go against the public play. The public are mere marks. Burroughs’ articles that appear in the underground press are a far cry from the cut-ups that appeared in the publications of the Mimeo Revolution just two years earlier. One is Burroughs at his creative peak and one is Burroughs collecting a paycheck. My money is on Burroughs the experimentalist. This is the Burroughs worth listening to.

Unlike the appearances in Rat and International Times, “The Unspeakable Mr. Hart” is Burroughs in full experimental mode. He is searching for a new form of expression, what ultimately became the graphic novel. Burroughs and Mc Neill were doomed to be pioneers rather than accomplished professionals. Yet that is fine with me. In fact it is preferred. I am fascinated by that which is in the development stages as opposed to their full flowering. The proto is the go-to in terms of not just collecting but enjoying art, literature and music generally. “The Unspeakable Mr. Hart” is the very definition of proto. It is primitive; it is preliminary. It is also original. Alan Moore, creator of Watchmen, considered by many to be the greatest graphic novel of the entire genre, has acknowledged that reading “The Unspeakable Mr. Hart” in Cyclops was a major influence on him. Moore realized that this comic, which was given pride of place in the centerfold of Cyclops, could be the foundation for a whole new form of literature. Flipping through the pages of this early adult comic paper, you can hear the proto-punk of The Stooges and the MC5 playing in the background. As a collectible, Cyclops is Phun City (as advertised within its pages). Kick out the jams, motherfucker!!