#17: Aspen 5+6: The Minimalism Issue (1967). An Installment in Jed Birmingham’s series of the The Top 23 Most Interesting Burroughs Collectibles. 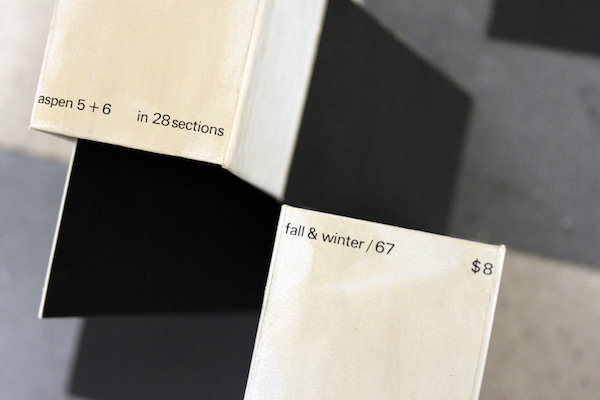 “Now kid what are you doing over there with the Beat Generation? Why don’t you straighten out and act like a real writer.” Now, I am far from some kind of truther who denies that William Burroughs was a member of the Beats. Clearly, Allen Ginsberg and Jack Kerouac were for a time his personal and creative peers. There is absolutely no shame in that. In fact, it is a badge of honor. Merely by having written “Howl” or On the Road you can stand proudly side by side with, if not look down on, any writer of the 20th century. Let’s not forget that the Beat Generation was the last literary movement with a large-scale cultural impact — one that actually mattered to the public at large, not just to other writers and academics. (Note: What follows is my own process of forgetting and downplaying their greatest legacy.) No, I cringe when Burroughs intellectually slums it at Naropa with Gregory Corso or Peter Orlovsky or when he gets chummy with any number of intellectual hoaxers, hucksters and con men, which as he got older was increasingly often. I find such interactions painful to watch. Like a once respected man getting drunk at a party. Think Joe Namath and Suzy Kolber on Monday Night Football: “I want to kiss you!!” To see Burroughs embrace UFO theories or L. Ron Hubbard is embarrassing. He has to keep to a higher standard. See, Burroughs is not merely a great writer; he is a profound artist and philosopher. I do not know exactly why I need him to be more than just a cult novelist but I do.

When I am alone and in my cups, a Burroughs bio-pic sometimes flickers in my brainpan. You might ask who plays Burroughs? I have always felt that the part should be played by a virtually unknown actor. El hombre invisible in terms of Hollywood credits. Somebody who has yet to make his name in the industry. In my dreams, this actor would become associated with his role as Burroughs so completely that it would be impossible for him to be believed in any other role. In a sense, he would be possessed by Burroughs and Burroughs would schlupp his identity as an actor. Peter Weller was never truly Burroughs. He was Robocop playing Burroughs. 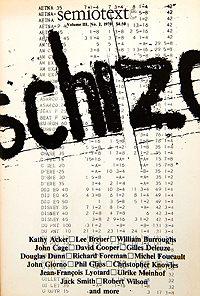 And what would be the film’s opening scene? This is where things get weird and, well, a bit pretentious. Literary Outlaw opens with Burroughs’ induction into the Academy of Arts and Letters. Call Me Burroughs begins with a Native American exorcism. My bio-pic would open with Michel Foucault speaking at the Schizo-Culture Conference at Columbia University in 1975. (Remember this is something of an art-house, docu-drama movie, think Pollock.) There would be some establishing shots of a raucous crowd, like one ringside at a boxing match or a strip club, as Foucault ruffles his papers. He begins to speak, starting to get his rhythm. Then the backdoor of the auditorium opens, light pours in, and in shadow stands a figure seemingly ten feet tall. Even in outline, Burroughs is immediately recognizable. Perhaps that is the definition of an icon. He strides down the aisle as the soundtrack builds with a score by Ennio Morricone or maybe Issac Hayes, I have not yet decided. Burroughs arrives at his seat, front row center. The music fades to dead silence. The proverbial pin and whatnot. Shot to Foucault with sweat on his upper lip as he looks at Burroughs. The Frenchman is barely able to hold his gaze. Burroughs peering through the smoke of a Senior Service cracks a knowing smile. And then Foucault says: “I see that William Burroughs has walked into the room. Let me sit down as I am sure we all want to listen to somebody who knows what he is talking about.” Opening credits roll.

You must understand that the peers of my Burroughs are Beckett, Duchamp and Cage. As New York Life says, it’s the company you keep. It is probably a failing on my part. Possibly an attempt to fill the emptiness of my own intellectual life. Burroughs, I am sure, never felt any inadequacy in this regard and hung out with whoever he damn well pleased, which in his last years were mere citizens and good old boys. Again this bothers me. Burroughs is fucking executive timber, goddamn it!!!

This brings us to Aspen 5+6: The Minimalist Issue, published by Roaring Forks Press in 1967. There are two ends to the artist magazine spectrum. At one end is Wallace Berman’s Semina. Decidedly DIY and lo-fi. At the other is the high concept and multimedia Aspen, which takes a move from chess master/Dada daddy Marcel Duchamp. It is a magazine housed in a box, each issue focused on a particular theme or topic, with series of rotating guest editors. Aspen is Semina with an editorial board and a sizable budget. Issue 5+6 was edited by Brian O’Doughtery, who wrote Inside the White Cube: The Ideology of the Gallery Space, and over the years, Aspen, like Semina, has found itself ushered behind the velvet rope of the institution and a part of its ideological underpinnings. 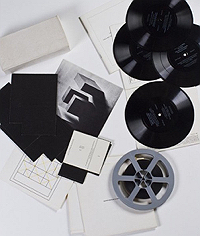 A complete run of Aspen is close to $20,000 and a brief review of some of the issues will tell you why: it is art first, my friends, and magazine second. Andy Warhol and David Dalton designed the Pop Art-themed third issue, featuring Warhol, Jack Smith, and the newly formed Velvet Underground. Box four is the “Medium is the Message” Issue, which features an article on the Hell’s Angels, John Cage and electronic music. Issue 6a is the Fluxus issue, distributed free of charge at publication; now it is extremely rare and free no longer. Issue 7 is the British Issue; John and Yoko are front and center. Issue 9 is a psychedelic issue designed by early Velvet Angus MacLise. The last and rarest issue is the Japanese Issue featuring Gary Snyder amongst others.

Mind you, this is only a small sampling of each issue’s contents. Ubuweb has digital versions available (I highly recommend you check them out) but looking through the run of Aspen, which is heavy on flexi-disks, 8mm film, and printing of all types, it is obvious that the digital versions pale to the physical objects. This is a magazine that demands to be held, used, and picked through. It is a magazine functioning as an archive.

Issue 5+6, which includes a flexi-disk of Burroughs reading Nova Express, with Robbe-Grillet on the B-side reading an excerpt from Jealousy, is widely considered the best of them all (the Pop Issue is another contender), and the issue which most successfully captures the essence of its conceptual theme. The issue features 28(!) numbered items and an advertisements folder. Contributors include, you guessed it, Beckett, Duchamp and Cage. Now this is more like it; these are the accommodations that somebody of Burroughs’ stature is accustomed to. But I know the song that is running through your head: “One of these things is not like the others; one of these things does not belong.” 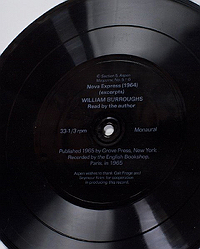 Burroughs is not a minimalist!! He is so over-the-top. Naked Lunch is a novel of excesses and appetites. It is of the body as much as the mind. It threatens to spill out in all directions, right? That is clearly not minimalism. Well, I disagree. Three essays on postmodernism are included in the box: Roland Barthes “The Death of the Author,” George Kubler’s “Style and the Representation of Historical Time,” and Susan Sontag’s “The Aesthetics of Silence.” Now think Naked Lunch: “I am a recording instrument. . . .I do not presume to impose “story” “plot” “continuity.” Here we have Burroughs when he first contemplated killing the author. Burroughs’ cut-up work of the 1960s, like Nova Express, follows through on this threat of violence. The cut-up novels are murder in the first degree. Burroughs seeks to destroy authorial control; the cut-up technique slices the author to ribbons. The ultimate goals of the cut-up are to explore time and to achieve silence, and, like Robbe-Grillet, Burroughs in the 1960s was writing the nouveau roman. It should be noted that Burroughs is on the A-side of the flexi-disk. In mid-1960s avant-garde circles, Burroughs was a true rock star. Like Duchamp (art), Cage (music) and Merce Cunningham (dance), Burroughs explored time and space through literature. Like a minimalist, Burroughs is stripping literature down to its basic foundations: the Word. No plot, no story, no beginning, middle or end. Then ultimately to rub out the word altogether. Like the maze sculpture model of Tony Smith, Burroughs is an architect constructing literature from found words that are cut and pasted into new structures, like grids or three-column texts, which can be read in any direction. Or Burroughs is the writer as sculptor chipping away at word blocks and word associations to get down to what is most basic and essential. To get down to nothing: silence, which as Cage demonstrated, in 4’33”, is far from nothing, which as Beckett proved is definitely something or the only thing that matters. Then there is Duchamp who retreated into silence altogether.

In Aspen 5+6, Burroughs reached his peak in terms of being accepted as a serious philosopher and artist; he communed there with the gurus of art, music, philosophy, and literature, but having reached such heights through the cut-up technique Burroughs quickly came down from such rarified air and pandered to the masses. Perhaps Burroughs found that the silence of Duchamp was overrated, or maybe Burroughs felt he was undercompensated. What followed after his appearance in Aspen was a return to corporate publishing and a series of paying gigs writing for underground newspapers and porno mags. True, in Aspen, Burroughs was a disembodied voice trapped in a box, but he was a far cry from Max Headroom. But starting in 1967, Burroughs the philosopher was well on his way to becoming a pundit.

Written by Jed Birmingham and published by RealityStudio on 20 December 2015. Images of Aspen from Galerie Erg and Live Auctioneers.
Aspen William Burroughs