#11: The Hardiment/Crowder Archive — Jim Pennington aloes books. An Installment in Jed Birmingham’s series of the The Top 23 Most Interesting Burroughs Collectibles. 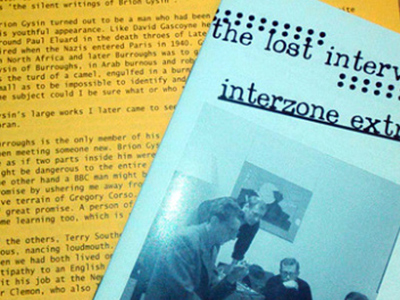 For my birthday last year, my in-laws bought me 1965: The Most Revolutionary Year in Music by Andrew Grant Jackson. This is precisely the type of book one would expect in 2015. As Brion Gysin famously noted, fifty years is something of magic number. For example in 2009, 1959: The Year Everything Changed came out. With the passing of half a century, there is enough distance for historical perspective. In twenty-five years something becomes collectible, in fifty it becomes the subject of history, if not also of archeology. Both books are interesting and worth a read if you can get a hold of them. As you might expect, Burroughs plays a role in 1959, but I was hoping to see more of him in 1965. Burroughs’ cut-ups influenced Dylan’s Bringing It All Back Home and Highway 61 Revisited, arguably the most revolutionary albums of the year. And if Dylan was the most revolutionary musician, the Velvet Underground was the most revolutionary band, and Burroughs influenced them as well. With this in mind, I was hoping to see some mention of 1965’s Call Me Burroughs LP, a revolutionary spoken word album that altered the course of music.

In any case, 1959 and 1965 happen to be pivotal years for Burroughs for precisely the reasons indicated in the books’ subtitles. 1959 was the year everything changed for Burroughs. He transformed from a pulp fictioneer into an international avant-garde novelist who would just as quickly mutate into an experimental poet. And I would argue that in 1965 Burroughs was in his most revolutionary period. Surely in the later 1960s, Burroughs parroted the radical talk of the day, but by 1968, the counterculture was in danger of being co-opted by mass consumer culture, particularly as the underground was presented by the underground press where Burroughs held court. The late sixties were the years of Burroughs as a talking head. 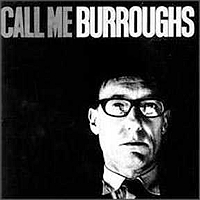 For me, 1965 was the flashpoint at which the counterculture and Burroughs along with it first surfaced in the mainstream, and remarkable things can happen during such moments of flux and transition. This was the year that Burroughs’ most radical cut-ups were presented before a reading public, even if small and already dedicated. I am thinking mainly of Time, and “The Dead Star” as published in My Own Mag. In general, Burroughs’ participation in the Mimeo Revolution peaked mid-decade. At that point, these publications were for the most part published by DIY poet-publishers, not hippie businessmen. Burroughs was also working with Gysin on The Third Mind manuscript, which if published as intended would have been a major theoretical and artistic statement. As mentioned above, Call Me Burroughs came out independently in 1965 and, even more than Naked Lunch the novel, the LP introduced Burroughs’ voice to a broader audience. Riding the publicity of Naked Lunch, Burroughs was able to con the marks and get Nova Express widespread distribution and publicity in late 1964, and on into the following year. As with Velvet Underground LPs, Nova Express got into the right hands, influencing a generation of artists, musicians, and poets, even spawning a revolution in science fiction.

Not surprisingly, my list features several works from 1965, and as any reader of the Bunker knows, little if anything after that watershed year. Unfortunately I must view things in a rearview mirror in order to get any type of close reading on it. There is little in Burroughs’ bibliography that was published during my lifetime that strikes a chord with me. For the most part, it was a period of corporate publishing deals and manufactured collaborations designed for the collectible market. Such elevator and chamber music are not to my liking.

Yet in 2014, I received a package in the mail that was music to my ears, sent my heart singing, and stuck in my mind. In conjunction with his presentation on Melville Hardiment at the EBSN conference in Tangier, Jim Pennington of aloes books published a small, remarkable archive of materials related to Burroughs’ visit with Hardiment in England in 1960. Hardiment, a poet and friend of Burroughs, is a fringe figure at best. He is not mentioned at all in Literary Outlaw and mentioned just once in Miles’ Call Me Burroughs, in connection with the 1960 visit, where Hardiment gave Burroughs his first LSD. For many Burroughs fans, Hardiment is remembered if at all for his possession of a suitcase supposedly full of Burroughs’ archival material that was presumed lost. For Burroughs collectors and archivists, the Hardiment suitcase is mythic, like the lost suitcases of Ernest Hemingway and Walter Benjamin. Some believed its contents contained the missing Word Hoard that Oliver Harris found little evidence of in the archives. I had always heard rumors that Richard Aaron found and sold the suitcase.

Hardiment and his suitcase are much less of a mystery now, due to the meticulous archival and field research Jim has performed with great flair. Jim presented a powerpoint presentation in Tangier and he contributed an essay (along with Oliver Harris, whose essay on Call Me Burroughs could be in a top 23 list of his own; how about it, Oliver??) for an exhibition of the Harriet Crowder photographs that documented Burroughs’ 1960 visit. Jim printed the catalogue. Crowder took the iconic shot of Burroughs that appeared on the Call Me Burroughs LP, yet most of the shots she took that day were unpublished and unseen until Jim brought them to light. He also solves the mystery of the suitcase and provides valuable background on the relationship between Hardiment and Burroughs.

The package I received from Jim was handstamped and contained a series of postcards made from Crowder’s photographs, a booklet containing a transcript of a “Lost Interview” from 1960 recorded by Hardiment for the BBC involving Burroughs, Clancy Sigal and Patrick Bowles, and an essay by Hardiment on Burroughs. The interview was presented as a small chapbook or booklet. The essay was printed on old gold foolscap mimicking the format of Nuttall’s My Own Mag. The final personal and old-school touch was a typewritten letter from Jim in red ink on aloes books letterhead, complete with hand corrections. Four individual pieces presented in four different formats, utilizing multiple printing technologies. 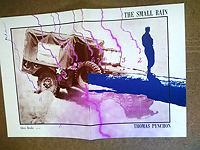 I no doubt feel a sense of belatedness regarding all the meaningful revolutions in art, film, literature and music, but I may live to see and participate in a successful revolution taking place in academic publishing and library science. I have called for a Mimeo Revolution in literary criticism and I have tried to put my shoulder to the wheel with Mimeo Mimeo and its accompanying blog, Planned Obsolescence Press, and RealityStudio. Again multiple outlets utilizing a mix of the digital and hard copy. All self-funded and all DIY. Jim shows what is possible when a true master of the little press gets his hands dirty. I should take time here to give a shout-out to Jim’s work at aloes books. In a previous post I discussed my appreciation for Thomas Pynchon, but my disappointment in his bibliography. Jim’s series of Pynchon bootlegs are the exception that proves the rule: Morality and Mercy in Vienna; Low Lands; The Secret Integration; The Small Rain; Entropy; and A Journey into the Mind of Watts. Keeping track of Jim’s variants and re-issues (for example the Pynchon bootlegs feature thirteen different publications if one takes all the versions and re-issues into account) makes tracking down a complete aloes bibliography as elusive as Pynchon himself. Possibly only Jim could attempt it. The time is long overdue for an aloes books archive on RealityStudio. Hey, Jim, what do you say?

In 2014, I requested Jan Herman and Charley Plymell for my panel on Burroughs and the Mimeo Revolution. Jim would have been right at home on that panel as well. His White Subway and Snack from the 1970s are, like his Hardiment materials, great, early examples of publishing as archeology, the recovery of a lost or disappearing past through the re-discovery and re-presentation of primary materials. Some might dismiss it as bootlegging, yet in a time of revolution, scholarship should flow freely by any means necessary. In academics and in libraries, access is progress. Alex Wermer-Colan’s pamphlet The Travel Agency Is On Fire for the CUNY’s Lost and Found Series, as well as Oliver Harris’s continuing excavations of the archives (which are being published by a major press and are therefore accessible to a mass readership), suggest that we are in the middle of a revolution in Burroughs scholarship, not just in content but also in terms of distribution. Traditionally, rare booksellers have been at the forefront in issuing archival material in collector’s editions. Skyline Books’ In Search of Yage from the late 1990s is a case in point, as was, more recently, Derringer Books’ LP of a Wallace Berman interview, which was acquired as a cassette from another dealer.

Jim takes matters a step further by going back to his roots in the Mimeo Revolution. The fact that Jim struggled (and eventually failed) to get the Hardiment essay printed via mimeograph tells me all I need to know about the myth of how quick and easy this lost art is. Jim also demonstrates that you do not need a university or academic publisher to present valuable archival research thoroughly and professionally. To my mind, Jim does his work with more joy and creativity and with more nuance as to form and content. Jim knows his Creeley and Olson and he proves that form is never more than an extension of content. Jim documents Haridment’s suitcase by playing off of Duchamp’s Boîte-en-valise. Academic publication presented as archive. Scholarship can aspire to more than merely presenting academic information and analysis in the straightjacket of a journal intended for other inmates of the asylum; it can also be freed from its formal restraints and appreciated as an object. And in the hands of someone like Jim that printed object can be a form of academic analysis in itself. Such DIY creative criticism is revolutionary and I am proud to be fighting, not in the streets, but amongst the bookshelves, alongside a little press veteran like Jim.

P.S. While I was putting the finishing touches on this essay, Jim sent me another package inspired by his reading of my piece on Suck. A listing of textual differences between various editions of The Wild Boys. That is what I am talking about. Scholarship as gift exchange. Scholarship should not be the product of occupational obligation and an accompanying bureaucracy. It is should be driven by passion and pleasure, not duty and tenure. Barrooms not classrooms or conferences. I feel the same way about professional academics as I do professional sports. They pervert joy and leisure into something driven by production and profit on top of treating their employees and fans like complete shit. I would like to see Jim take a page out of the book by Jon Beacham. How about creating a subscription for a sum to cover costs if necessary whereby Jim would mail out whatever scholarship he produces in whatever format he dreams up? I, for one, would look forward to such gifts from one so bibliographically gifted. Wouldn’t you?

2 thoughts on “#11: The Hardiment/Crowder Archive”