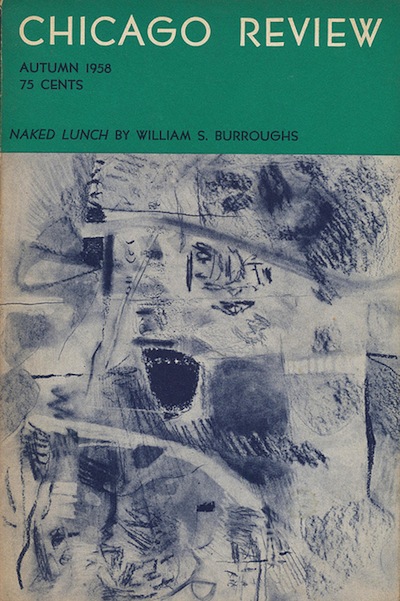 Jack Mabley’s review copy. There are no discerning features to Mabley’s physical copy. In book-collecting terms, it might be considered fine. Seemingly the magazine was preserved and treated with a respect that Burroughs’ text was not. Notations are in black ink. A meticulously clipped copy of Mabley’s review is tipped in. Location: Special Collections at the University of Chicago.

Marginalia is a form of Twitter. Literary ticker tape. They reflect immediate impressions on the latest releases and current events. Such is the case with Jack Mabley’s copy of the Autumn 1958 Chicago Review, featuring episodes of Naked Lunch. Mabley, a Chicago Daily News columnist, reviewed this issue in an October 25th column entitled “Filthy Writing on the Midway.” Mabley’s annotated comments in the Review, taken in preparation for his article, provide a record of one of the earliest interactions with Naked Lunch and are thus an important document in the history of reading Burroughs. A history as yet largely unwritten.

Mabley obsessively underlined and circled offensive words like “shit,” “ass,” and “fuck” in order to document that the Chicago Review was “one of the foulest collections of printed filth I’ve seen publicly circulated.” Mabley’s compressed, compacted handwritten notes on Naked Lunch contrast with his view of the text as “kids chalking a four-letter verb on the Oak Street underpass.” His annotations reflect the repressed, restricting hand of the censor. Mabley’s holograph commentary is invaluable in that it preserves the outrage that greeted Naked Lunch on its initial publication. This sense of shock and offended sensibility is easy to forget in an atmosphere where Naked Lunch is acknowledged as a classic of post-World War II American fiction and as a testament to the belief in freedom of expression.