An Installment in Jed Birmingham’s series on the The Greatest Burroughs Collectors. #6 is Jeff Ball. 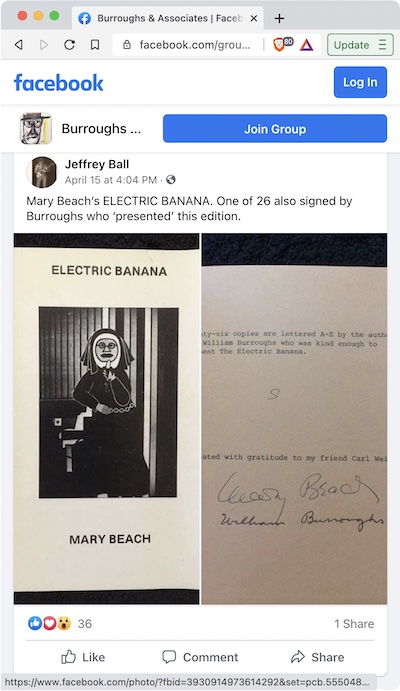 When Jeff Ball looks at a bookseller catalog dedicated to William Burroughs and is asked if he wants to make an order, he is like a glutton, er, I mean gourmet, who goes into a restaurant and orders everything on the menu. As it relates to Burroughs, Ball wants it all. He is a completist. Early Burroughs, late Burroughs. First editions, foreign editions, limited editions. Books, magazines, posters, ephemera. Paper or plastic. Ball started collecting Burroughs before the Internet changed the game, so he experienced the old school methods of want lists and want ads, the AB Bookman, and hard copy catalogs. If you can believe it, Ball purchased Burroughs books at brick and mortar rare and used bookstores. Yes, such places existed at one time. Ball prowled church sales, library sales, yard sales. And he was good at it. Pre-Internet, Ball amassed an impressive Burroughs collection by any standard.

Then the seismic shift. With the Internet, rare books were revealed to be common and vice versa; having the knack of finding rare books meant less than having the cash to pay for them; and if you sit around the campfire with the old timers, they will tell you that all the fun went out of book collecting. There are those out there who believe that fun things must also be difficult. There is a distrust of easy pleasures; one feels guilty about them.

For Ball, the Internet was a godsend. Ebay was his playground. Like many collectors, Ball is driven by the thrill of the search. Ebay preserved that thrill. He could spend hours on the site and not get to the bottom of it. An interesting essay could be written about those early battles on eBay, when Bigcrux, Benjimanspooner, and Ratishna ruled the virtual Earth. Their names were obscured to protect their innocence, since they were guilty of being Burroughs addicts. In the days before AuctionSniper, they hit refresh at three in the morning upping their bids before the virtual hammer fell. No blood was spilled but feelings were hurt, and collections were damaged as a prized Burroughs title fell into the hands of the enemy. A gap in a collection might never be filled and that gap became a hole in one’s very soul. These warriors became friends; eBay was after all a community, like Burroughs collecting is a community, until the next auction and then all bets were off. It may not surprise you that these three men are three of the greats. But I have said too much. In the age of the Internet, Ball’s collection expanded 20-30 fold. It was an embarrassment of riches; Ball could not buy everything, but he could try.

All this would make Ball like many other Burroughs collectors. In fact, Ball does not have the most complete collection or the most interesting or the most important. Ball’s strength is not as a contextualizer nor as a creative either. He is an accumulator. They are a dime a dozen no matter how wealthy they are. So, what sets Ball apart? Why is Ball on this list? 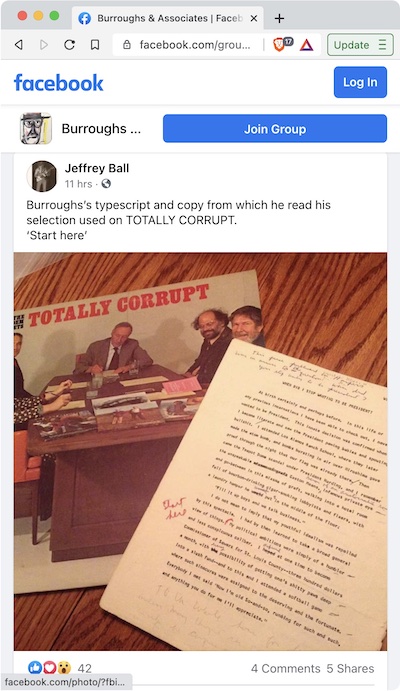 Once upon a time, a collector would hide away his collection. One’s library was a jealously guarded secret. One’s books were for one’s personal enjoyment only. Sole possession was a source of glee. The fact that nobody else could have it, that nobody else could see it, brought joy. There was something clandestine about collecting, something sinister. Think John Fowles’ The Collector. Collecting books was like kidnapping someone and hiding them away. That was old school. That was collecting in the days before the Internet, before scanners, before social media. But most importantly that was collecting before the age of celebrity met the age of going viral. Ball is a pure exhibitionist, and he is shameless, and he has a great Burroughs collection. So naturally Ball is a perfect fit for social media. As the Joni Mitchell of the social media age, Lily Allen, sang: “And I’ll take my clothes off and it will be shameless / Cause everyone knows that’s how you get famous.” Ball goes full frontal and exposes his collection to the public. No Burroughs collector is as comfortable with nudity.

Social media, like Facebook and Instagram, and the Internet generally, provide access to more information than ever before. The breadth of that information is vast, but it is thin; it lacks depth. This may be about to change. Facebook has announced a subscription newsletter service, like that of Substack, which will allow Facebook users to provide more depth and context to their posts. Who from the Burroughs Facebook page will be the first one to provide a subscription newsletter of not only their images, but also their observations, anecdotes, and insights?

As I said Ball, as of yet, is not a contexualizer, but it is his collection and other collectors that follow his example that provide any depth to the Burroughs Facebook page there currently is. In a world of memes and reposts and easy likes, Ball allows the general public to experience the Burroughs bibliography to a degree that would be impossible otherwise. With his images, photos, and scans, Ball provides access to his collection. Access is crucial to being a great collector. If nobody knows what you have, your collection does not exist. Burroughs’s work is why Burroughs is great, interesting, and important, not his love of cats, guns, or drugs. Ball and his posts make the Burroughs Facebook page entertaining, but they also make it relevant and important as a resource. 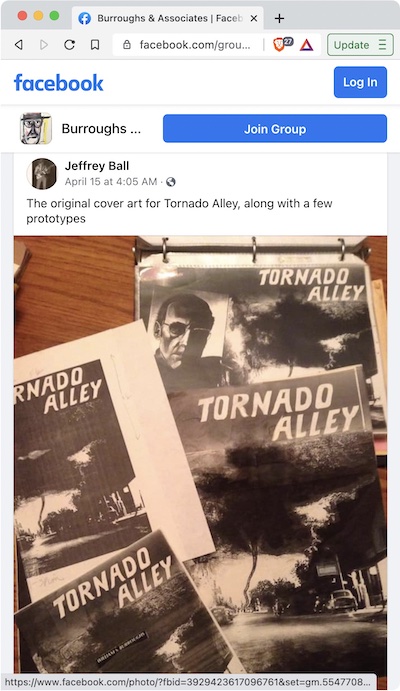 There is an element of violence to Ball, like with all pornographers. He does not handle his collection with kid gloves; he does not put his items on a pedestal. He puts them in awkward positions; he spreads them open; he violates them; he exposes them to harsh lighting. All in order to feed your fetish for images. Ball ties Burroughs collecting to exploitation. In the world of Burroughs collecting, Jeff Ball is the most prolific pornographer around. And thank god for that. With Larry Flynt recently dead, long live Jeff Ball!!! In short, Ball is the ultimate Death Dwarf1:

1When it comes to images, I am burying the lead since I fear the soulless undead will rise from the death of print and haunt the world’s empty libraries. The recent sale at Christie’s of a digital artwork by Beeple has the potential to completely change the game in the world of collecting. Who’s to say that the next great Burroughs collector will not take pornographers like Jeff Ball one step further and do away with the physical objects of collecting altogether? Is there a Burroughs collector out there who is scraping the entire internet and collecting all Burroughs related images and creating a massive archive of this material? And what if this collector is also a future Beeple, a digital artist who incorporates Burroughsian images and concepts into the artwork?

Burroughs’ theories of the image, addiction, and the virus seem particularly pertinent to this new generation of artists. Facebook and Instagram are already full of Burroughs-related memes and artwork along these lines. Or what if the next great Burroughs collector is a Banksy? Could it be possible that Richard Prince will take his copy of Naked Lunch inscribed by Burroughs to Paul Bowles and destroy it but not before documenting the book and its destruction as an NFT? Is this art or is such an act already a cliché? The next genius in this regard has yet to emerge. It is only a matter of time.

As Derrida and others have written, the death of print gives rise to fetish so the future of collecting of books as physical objects could be secure. As an obsolete technology, they could be more prized than ever. Vinyl, cassettes, and 8-tracks have all made a comeback in the music industry with the rise of digital music sharing. In independent publishing, hard copy zines are on the rise and heavily sought after. Young people still seem to have the fever. But I would also not be surprised if future Burroughs collectors bypass the physical objects of collecting and focus on the born digital. Libraries and museums, our traditional repositories of physical objects, have been deaccessioning them for decades and replacing bookshelves with computer terminals and video screens. New generations of collectors brought up on platforms like Facebook and Instagram, video games, digital file formats (like NFT), and the Internet generally, may no longer feel the aura of physical objects. In fact, they may actively dislike and distrust them. In a time of immanent disaster, the benefits of traveling light and having a portable collection on your phone is obvious. I know for a fact that my collection has made me immobile and tied down. All these objects are suffocating but now they are especially life-threatening. The items in my bookshelves are fossils; they always were. But increasingly I seem a dinosaur for having them.

Written by Jed Birmingham and published by RealityStudio on 17 April 2021.