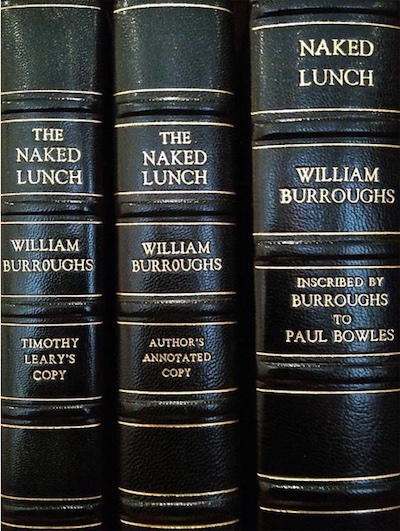 It seems like ages ago when I wrote on the top 23 Burroughs collectibles. Over the years I have talked with other Burroughs collectors about that list — what was missing, what was spot on, what was missing from our collections and, most importantly, what other collectors had — and it got me thinking: Who are the greatest, most important, most interesting Burroughs collectors? Now I know what you are in turn thinking: Who the fuck cares??!! What an epic case of mental masturbation! Jed, this is a new low, even for you, chronic masturbator that you are. You have been jerking off over your own collection for well over a decade now.

So if you happen to be creeping in the alley sniffing keyholes, you might hear me talking about how I have become addicted to meth and Red Bull trying to stave off sleep around the month of February in anticipation of the next Andrew Sclanders’ BeatBooks catalog, because maybe, just maybe, the next catalog won’t be all about Mick Farren or Oz or some other stupid and irrelevant bullshit, and instead will be the mother lode of Burroughs material that I have been waiting for all my collecting life. And you might hear me rant to this fellow collector that my hair is falling out in clumps and my gums are bleeding and rotted and that I am sucking on Baby Ruths (cause I dig them special). Yet finally after hitting refresh on my browser for the one millionth time, the BeatBooks catalog dropped and indeed it is the mother lode. Apparently, a Burroughs collector we have never heard about just died or just went broke or just got divorced, or whatever; we don’t care; what matters is that his (always his) collection is now in the wild. And I scan through the catalog feverishly and there it is, item number 23: Gambit: The New University Review (Spring 1963) featuring Burroughs’ “The Mayan Caper.”

Now, this is a magazine I have been looking for my entire collecting life and, guess what, it is signed, no wait, it is inscribed by Burroughs to Ginsberg. And then you might hear me screaming into the phone to this other collector that at the end of the item description was the dirtiest, most foul, most obscene (obscene is the only possible word for it) four-letter word in all of book collecting: SOLD. And to be sure your fellow book collector will probably feel his heart expand like the Grinch’s in an expression of pure joy, but maybe he feels something else, maybe, he feels for me, because only another book collector can truly know my pain and truly sympathize or empathize or whatever the term is that means that he has been there and done that and that he has walked a mile in my diabetic shoes.

A central premise of my list on great Burroughs collectors: It is not enough to have great stuff. To be a great collector; one must be more than an accumulator. The act of hunting and gathering is basic to human development. A great collector must evolve. So, you might be surprised not to see many well-known Burroughs collectors on my list, such as Bradley Allen or Luzius Martin. Nelson Lyon is a good case study. Lyon’s absence kind of surprises me too, since he is probably the single most inspiring collector for the construction of my own collection. I have talked and written about Lyon and his influence before on RealityStudio. His collection, as auctioned by Pacific Book Auctions in 1999, was awesome. Lyon’s genius as a Burroughs collector was to get away from the A items of the bibliography, all while hanging out with an A-list author. Lyon parlayed his personal relationship with Burroughs into getting some unusual items signed; I am thinking particularly of little magazines, like his complete run of My Own Mag, which was signed and/or inscribed by Burroughs on all 17 issues. A Burroughs collector will never see the likes of that in any other Burroughs collection.

Yet Lyon could have done so much more. Given his personal relationship with Burroughs, Lyon could have provided an account of Burroughs’ reaction to the obscurities of his bibliography which Lyon laid out before Burroughs. He also could have questioned Burroughs on each of these items; such a bibliographic memoir written with detail and flair could have been one of the great books about Burroughs. Lyon was content to acquire and cash out. Such does not make a great collector.

A great collector must contextualize his collection. The collector must demonstrate the importance of what he has collected. He must talk about himself but not merely to himself, because…

Be out and be proud!!! Get your collection out of the closet!!!

I am sure there are great collectors of all sizes and stripes who might look at my list and say: My collection is more important than that! I am a great Burroughs collector! For example, there may be a collector in Mexico, who built an archive on Burroughs’ time there as well as in Central and South America. Surely, there have been scholars who have written on this topic, but I do not know of a Burroughs collector or Burroughs collection that has driven this research. No such collector has come forward and presented their collection for public consumption or let alone written about their collection publicly themselves. It is a tree-falls-in-the-woods situation. As is fitting for objects made of paper.

Closely related to going public in contextualizing a collection, is going public in presentation and display. Book collecting is all about possession, but the great book collector is not possessive. A great book collector must allow access to his collection. This does not mean an open-house policy, but it does help to have an open kimono, er, should I say open trench coat. What I am trying to say is that one’s collection should be an open book. That sounds better.

The most obvious example of this is to collect something that nobody else collects. This could be a collection of hats worn by Burroughs, drug paraphernalia related to Burroughs, an entire collection dedicated to one of Burroughs’ worst books: Exterminator! (1973) by Viking. Yet it not enough to be a pioneer, you must then map your explorations. Be creative then contextualize.

There is another aspect to being creative that I think is more important than being unique in what you collect. From rumor and legend, the artist Richard Prince has one of the great book collections going. He also collects William Burroughs. His acquisition of an inscribed Naked Lunch from Burroughs to Paul Bowles is one of the most talked about and controversial Burroughs purchases of all-time. For many it is an act of folly and highlights that collecting should be about more than who has the most money and is willing to spend it lavishly. Yet Prince is not one of the great Burroughs collectors, because, as mentioned above, nobody knows exactly what he has. After the Naked Lunch purchase, Prince may have developed an element of shame about his Burroughs collection. The greatest collectors must be shameless. They want everyone to know about their folly and cannot stop talking about it. Secondly, Prince is not a great Burroughs collector because he has not done anything (that I know of) creative with his Burroughs collection. Now, make no mistake, Prince is a great book collector. Prince collects pulp fiction about nurses and has made them the basis for his art, but, unless I am mistaken, his Burroughs collection has not inspired him in the same way as naughty nurses. His love of nurses has not bled over into a love of Dr. Benway. Thus, Prince is one of the great collectors of pulp fiction but not Burroughs.

The Burroughs collector is not a businessman

Being a great Burroughs collector does not have to be the exclusive domain of the extremely wealthy. A great book collection is not a display of wealth or an investment. So, it is not enough to present a collection on the auction block and point to prices realized or to lots sold in order to validate yourself as a collector. The monetary value of a collection is its lowest common denominator. A collection can be desirable at auction, but the collector himself may not be important or interesting in any larger, more meaningful sense. This is the tragedy of Nelson Lyon.

I will be posting an essay a week about the great Burroughs collectors. Watch here for further developments.

7 thoughts on “The Greatest Burroughs Collectors”