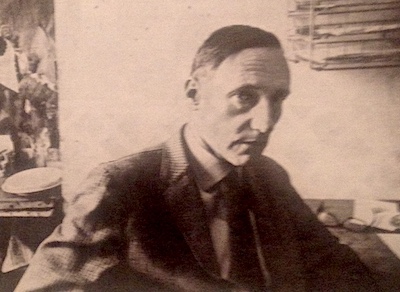 William Burroughs justifies living in this seedy room in an old hotel on the Ile de la Cité, saying “I know them here and they give me indefinite credit.” The credit extended by many of Burroughs’ critics is rather less than that given by Norman Mailer who described him as “the only American novelist living today who may conceivably be possessed by genius.” Burroughs’ work will be published in Britain for the first time next month when a compilation from three of his novels, including The Naked Lunch, appears, titled Dead Fingers Talk

In Britain the Burroughs affair began in earnest last October at the Edinburgh Writers’ Conference when a grey quiet man sitting on the platform next to Henry Miller was reverently introduced as the author of a book called The Naked Lunch. Owing to our curiously arbitrary censorship laws few people in the audience could have read the book and apart from delivering a baffling account in a grey American voice of how he used what he called “the fold-in method” of writing, the author himself sat and said nothing. 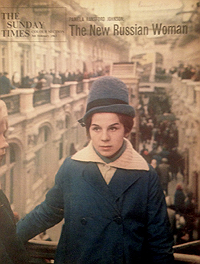 But as the conference continued it was clear that William Burroughs was being accepted as one of the key names of the conference. Norman Mailer referred to a remark he had made earlier about William Burroughs, the author of The Naked Lunch, being “the only American novelist living today who may conceivably be possessed by genius,” and there was something about the way Mailer said it and something about the way Burroughs looked when he said it that carried conviction. Unlike the rest of the writers present he strangely fitted in with the romantic idea of what a writer should be like. Palpably he was a man who suffered (he had been off heroin for nearly four years by then, but he still looked like death). He lived nowhere in particular, was virtually unpublishable, had no money, although he was a member of the Burroughs adding machine family, and was not concerned with worldly success. Above all he was an extremist who lived dangerously and for his writing alone, a surviving example of that vanishing but once flourishing literary man, l’écrivain maudit. William Burroughs was accepted as a legend.

Since then the Burroughs affair has taken a strange but not entirely unexpected course. Despite all the fuss about The Naked Lunch, there has been little serious critical concern for a book that Mary McCarthy and Jack Kerouac, as well as Norman Mailer have hailed as a 20th-century masterpiece. Amongst most people who have read it the reaction is much the same. They seem afraid on the one hand of being though old-fashioned and on the other of having their legs pulled very hard. For The Naked Lunch is a literary curiosity in almost every sense. It is a highly personal fantasy of the nightmare of drug addiction written by someone who has just emerged from it; it is an anarchical and obsessive book about drug taking and homosexuality. At times it is very funny, at times a stylistic tour de force. At others, it is like Finnegan’s Wake put through a mincing machine. Few people who start it seem to finish it.

Burroughs himself is inevitably slightly disappointing, a courteous, immensely serious man, who writes for a steady eight hours a day in an old hotel behind Notre-Dame. He has a tiny room with an iron bedstead and a tiled floor. A pair of socks hangs drying from a piece of string.

“I don’t live here for any particular reason, he says, “I really prefer Earls Court to Paris. The food’s better. But I know them here and they give me infinite credit.” 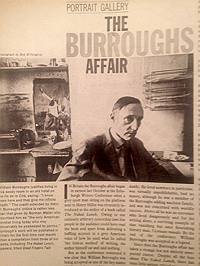 At the moment he is writing science fiction — “a form that gives me complete liberty to create an imaginary universe and people it with criminals and police. At some points I feel I overlap with C.S. Lewis, and at others with Kafka and Samuel Beckett. At the moment,” he adds, “I am writing S.F. for children. The adventures of Johnny the Space Boy.”

He works painstakingly, writing his first draft on a typewriter, reading it into a tape recorder and then correcting again and again until he is satisfied. As he describes his “fold-in” method of composition, he makes it sound far more deliberate than haphazard “action writing” in which lines of Shakespeare sonnets are scattered into the narrative.

“My writing methods are similar to those of photographic montage,” he says. “I want some of my characters in focus and others out of focus. So I cut into the story with a flash forward in the narrative to give a hint of what is to come. T.S. Eliot uses almost exactly the same technique in The Waste Land. Pure montage.”

He talks quite freely about the 15 years he was a drug addict and insists that he is now completely cured. “I tried everything from hemp and morphine to heroin and the hallucinatory drugs, like mescalin and the one thing I can tell you for sure is that drugs are no use for creative work. It was not until I had kicked the habit for good that I started writing The Naked Lunch. It was coming off drugs that gave me the chance of writing. It disturbed the whole set of habit patterns I had formed as a junky and it was like seeing everything for the first time.”

Paradoxically, William Burroughs sees himself primarily as a moralist and social satirist. “My criticism of most institutions is not that they’re evil, but that they simply don’t work. The people in control are making the earth unliveable in. As Inspector J. Lee says in my novel, Novia Express: “in all my experience as a police officer, I have never seen such total fear and degradation on any other planet.

Reproduced by Jed Birmingham and published by RealityStudio on 8 January 2017.
William Burroughs