The history and contents of the magazine Locus Solus provide insight into the type of progressive poetry circles and ideas Burroughs started tapping into with his small scale, textual cut-up works of the early 1960s. A testament to refined taste, Locus Solus was impeccably edited by John Ashbery (Issue 3/4), Kenneth Koch (Issue 2), and James Schuyler (Issue 1 and 5). Harry Matthews published the magazine in France. One issue was done in Switzerland. Matthews was the only American member of an intriguing group of writers: OULIPO. OULIPO was a largely French writing society that specialized in complex word games and the surreal. Ashbery, Koch and Schuyler, along with the charismatic and talented Frank O’Hara, formed the core of the First Generation New York School. The New York School, like the Beat Generation (the Beats also had a four-person core — Burroughs, Kerouac, Ginsberg, and Corso), went through two or three generations beyond the initial core group. 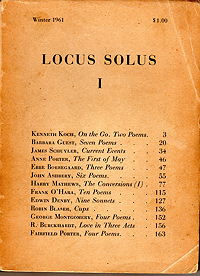 Locus Solus took its name from Raymond Roussel’s classic, which betrays the editors’ affinity for the avant garde, the European, and the highly intellectual. The Collaboration issue (Locus Solus II) opens with a quote by Roussel and is then followed by a quote from Lautréamont (both untranslated). The table of contents to the magazine features classic Chinese and Japanese poets, Shakespeare, Aeschylus, John Donne, André Breton, Dwight Eisenhower, Sir John Suckling: in short a wide selection of the history of Western and Eastern culture. The poets were intensely interested in modern art and music. Influenced and inspired by Abstract Expressionists like Willem De Kooning, Jackson Pollock, and Franz Kline, the New York School poets lived and worked with Second Generation New York painters, like Grace Hartigan, Mike Goldberg, and Jane Franchlier. The magazine’s squat, plain appearance mimics the style of French publications from Gallimard. The Special Collaboration issue features a few Burroughs cut-ups of Rimbaud with Gregory Corso from Minutes to Go. The Exterminator also published in 1960 offered further examples of the textual cut-up. The New York poets all experimented with cut-up techniques (as well as other surrealist techniques of automatic writing and composition) in the early 1960s. Many of these creations are in the pages of Locus Solus. First and foremost, the magazine served as a vehicle for the New York School poets to express and to spread their artistic aesthetic. 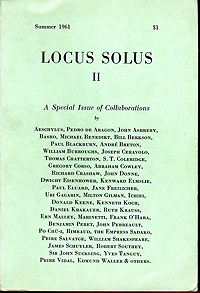 In 1962 around the time of Locus Solus II, John Asbery published his breakthrough collection, The Tennis Court Oath. Still a highspot of contemporary avant garde poetry, the collection explores the same ground that Burroughs covered in his early cut-up experiments. Ashbery mixes surrealism, concrete poetry, the yet-to-be established Language poetry, and cut-up techniques to form a radically new art. Ashbery’s comments on these poems are similar to Burroughs’ own ideas and practice. Ashbery states, “And I was also rather interested in trying something new, [and] having difficulty in doing this, living in a country where the language spoken was not my own. And I began a lot of experiments, using collage techniques, especially from American and/or English books and magazines, perhaps to feel that I had a toehold in the English language.” He continues, “My intention was to be after… kind of… taking language apart so I could look at the pieces that made it up. I would eventually get around to putting them back together again, and would then have more of a knowledge of how they worked, together.” 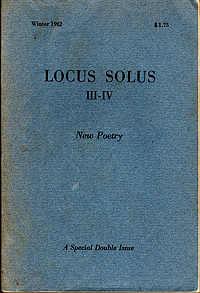 Although I am shaky at best regarding their literary theories, it seems clear to me that Ashbery and Burroughs are using similar techniques and have a similar preoccupation with language and the nature of written communication. Ashbery believed language should ultimately depend on references to meanings generated outside language. Burroughs has no interest in putting words back together in order to learn more about how words worked, like Ashbery. Instead, he seeks to blow apart language in order to reach a higher, more advanced knowledge. Burroughs yearns for silence or a pictorial system of communication like hieroglyphics that merge word and image. I have always been somewhat baffled by discussions of this type and a more informed opinions would be appreciated. What is interesting to me is how Burroughs fits into a larger, international discussion of the time. I think this is symbolized by Burroughs’ move from the isolation of Tangier or Mexico City to the central location of Paris. Although Burroughs still works at the artistic margins in comparison to mainstream literature, his work of this period situates itself squarely in the tradition of the literary and artistic avant garde which often found a home base in Paris.

In poems like “The Skaters,” readers of Ashbery encounter “an intractable flux of verbal ‘found objects,’ shifting styles and registers, teasing literary allusions and echoes, fragmentary narrative episodes and descriptive scenes.” Such a statement could be describing Naked Lunch or the true cut-up novels. I am not suggesting that Burroughs influenced Ashbery or vice versa, but I am stating that Burroughs with the cut-up moved from largely a drug novelist who dabbled in more literary aspects, as witnessed in Junkie, the then unpublished Yage Letters and “Letter from a Master Addict,” to an avant garde writer fully experimenting with literary theory. Not surprisingly, Ashbery supported Burroughs’ inclusion in the Academy of Arts and Letters in 1983. In literary magazines like Locus Solus, Burroughs appeared prominently in an international avant garde circle. Clearly, the poets of the New York School saw at an early date that Burroughs was a fellow traveler along newly laid paths in the postmodern literary landscape. 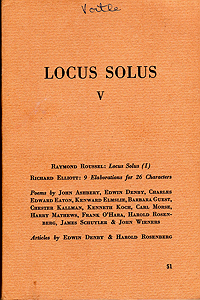