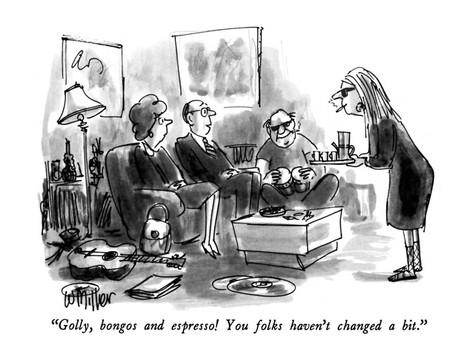 So who is your anti-Burroughs? What writer’s books are positioned as far away on your bookshelf as possible from your pristine copy of Naked Lunch? What writer’s books do you refuse entry into your library for fear of infecting your prized Burroughs items with bad mojo? Better yet, when you look over the shelves of friend or foe, whose books exude the unmistakable scent of mold and mildew, the sworn enemies of any thriving, vibrant library? Cue up the Skynyrd. “Oh that smell / Can you smell that smell / Oh that smell / The smell of death around you.” Sniff, sniff: Oh, dear, has John Updike been here? I would recognize that stale fart essence anywhere.

Whenever I read the opening pages of Naked Lunch I picture Updike as the square on the uptown A train. “Young, good looking, crew cut, Ivy League advertising exec type fruit…” For me the subway scene is a sizing-up of writers on the rise. It is the summer of 1959. Burroughs makes his home in the underground, prowling the pages of little mags and porno presses. Meanwhile Updike is a rising star New Yorker exec type fruit, who the next year will attempt to come on hip, with his straight response to Kerouac’s On the Road, Rabbit, Run. In the 1950s, Updike got his start in the pages of The New Yorker and was well on his way to becoming one of the darlings of that magazine’s elite. 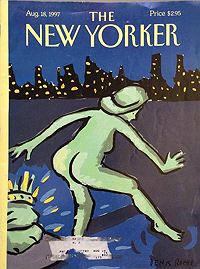 I can think of no magazine further away from spirit of the Mimeo Revolution than The New Yorker. Like winning the Pulitzer Prize, having your work appear in The New Yorker is as good as being pronounced dead as a writer. (Updike won two Pulitzers for fiction and appeared in The New Yorker countless times.) And for my taste, few writers had less of a pulse beating in his pages than John Updike. Fittingly The New Yorker excerpted Burroughs’ late journal entries on August 18, 1997, just weeks after his death. As far as I know, it was the first time this arbiter of literary taste allowed Burroughs within its velvet rope. Apparently Burroughs was only safe to publish in death, although he was in danger of appearing within the NY obits decades earlier.

It is a collecting maxim that one collects based on the events and enthusiasms of one’s childhood. If that is true it would have made sense for me to become an Updike collector because I grew up in the heart of Updike country: Reading, Pennsylvania. Like Wallace Stevens, a poet who actually was an exec type fruit, not advertising but insurance, Updike was born in Reading. His most famous novel, Rabbit, Run, takes place in Brewer, Pennsylvania, a fictionalized version of my hometown. In the Rabbit novels, Updike writes my life story to some extent, or at least my stepfather’s. Like Rabbit Angstrom, my stepfather was a high school basketball star from small-town Pennsylvania. Updike’s terrain, “American small town, Protestant middle class” is my backyard. Some people like to collect their family history, but as Charles Olson wrote, “I stood estranged from that which was most familiar.” So it was not to be Updike for me.

But that is not to say I do not have Updike books in my library. No, they seem to breed in my shelves like rabbits. I have reading copies of dozens of them. They are common as cat shit at any library book sale, which makes sense for a prolific writer who turned out novels at the rate of one a year like clockwork. Out of a sense of duty, I doled out the dollar for The Poorhouse Fair, The Centaur, Couples, Brazil, the Rabbit and Bech books, or any of the other seemingly endless titles to my shelves. I just never actually read them. I have read just one Updike novel, Rabbit, Run and I found that it did not speak to, nor for, me. Naked Lunch, a book I have seemingly next to nothing in common with, did more than read my mind; it shaped it. Updike wrote about daily life; Burroughs, as man and writer, was larger than life. I will take the mythic over the domestic. 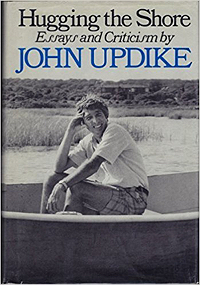 All this is a long way of saying that it seems to me that Updike and Burroughs wrote in almost different languages and I see them as something like opposites, which may explain why I was so surprised to find out that Updike reviewed Port of Saints by William Burroughs. I should not have been; Updike wrote on just about everyone and everything. But the real surprise is the positive nature of the review. I am an absolute Burroughs fanatic and I have little to say about Port of Saints. Updike must see something I do not. Maybe I have been wrong all these years; maybe Updike and Burroughs are not that different. After all both were Harvard-educated WASPs who wrote about the American way of life. What comes through first and foremost in the Updike review is that he respects Burroughs as a writer. “Port of Saints is claptrap, but since it is murderous claptrap we feel we owe it some respect. We would like to dismiss this book but cannot, quite.” Perhaps Updike saw something of himself in Burroughs. Both were writing junkies, which for Burroughs resulted in a prolific, sometimes, wildly uneven output. Updike on the other hand was remarkable (or unremarkable) for his consistency. Be it the novel, criticism, or poetry, Updike could do it all. And well. It could be argued that Updike does not have a Port of Saints on his resume, but he does not have a Naked Lunch either. With Burroughs, I will take the lows in order to experience that high. Updike, like Burroughs, knew firsthand that writing was not a kick; it was a way of life. Updike is often described as the last true man of letters. The Port of Saints review suggests that it takes an addict to know and respect an addict.