By the late 1950s, literary magazines were much on Burroughs’ mind. He was no longer satisfied with publishing his numerous routines in letters to Allen Ginsberg. Naked Lunch began to take shape as a novel and Burroughs sought a larger audience. Mainstream publishing houses were out of the question. Even Olympia Press rejected the initial manuscript. The literary magazine remained Burroughs’ only outlet. In fact, they carried his hopes and dreams as an author. Black Mountain Review and Yugen saw Burroughs through a period of almost complete despair. The controversy surrounding Naked Lunch‘s appearance in Chicago Review and Big Table finally caught the attention of Maurice Girodias of Olympia Press who agreed to print Naked Lunch as a paperback. After more than five years shouting in the literary wilderness, Burroughs was once again a published writer. In the foreword to his bibliography, he wrote, “So it was publication in a little magazine that led to the publication of Naked Lunch at a time when I had almost given up. For many years I sent out pieces to all little magazines that asked me for a contribution, as this bibliography attests.”

Just how important was the literary magazine to Burroughs in the late 1950s? So important that he considered, no matter how briefly and how jokingly, of starting his own outlet. While living at the Beat Hotel in Paris with Gregory Corso, Burroughs toyed with the idea of starting Interpol: “the poet is becoming a policeman.” Corso and Burroughs fleshed out the scheme in a letter sent to Allen Ginsberg on September 28, 1958. Burroughs wrote, “When the Human Image is threatened, The Poet dictates forms of survival. Dream police of poetry protect us from The Human Virus. The human virus can now be isolated and treated. This is the work of The POLICE-POET.” Allen Ginsberg was to serve as the magazine’s coeditor. What would the magazine include? “[O]ur content will be of the most sordid, vile, vulgar, oozing, seeping slime imaginable. We only want the most disgusting far-outness,” wrote Corso. This provides interesting insight into how Naked Lunch was viewed at the time even by Burroughs’ peers. Clearly, Burroughs believed he had written an unpublishable novel. Contributions to Interpol would include “Bowles (his most disgusting); Tennessee Williams (his most); and your [Ginsberg] bubbling, gooey cocaine writing; and [Jacques] Stern’s most humiliating, and Kerouac’s most maudlin, etc.” Corso continued, “I will tell you what we plan for our format: first an editorial, by either Bill or me or both. In it we will inform our readers that the thing this week is Palfium, or that one needs a prescription now for Diosan in Spain — kind of junk news, etc. Also we will review books, books written by junkies, fiends, cross-eyed imbeciles, huge-footed oafs, etc. We will praise and hail and laud all kinds of bile, and put down, pan, condemn all kinds of respectability and whiteness.” 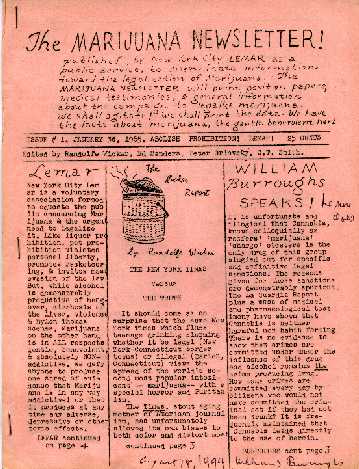 It all sounds very tongue-in-cheek, but it was crazy enough to work. In The Beat Hotel, Barry Miles describes Interpol as a “forerunner of the underground press.” The time and, possibly, the drug were just not right. By 1965, just such a magazine was demanded by the counterculture. Fuck You Press published two issues of The Marijuana Newsletter. The Newsletter was “published by New York City LEMAR as a public service, to disseminate information toward the legalization of marijuana. The Marijuana Newsletter will print position papers, medical testimonies, and general information about the campaign to legalize marijuana. We shall agitate! We shall print the data. We have the facts about marijuana, the gentle benevolent herb.” The Newsletter contained editorials including two pieces by William Burroughs: “William Burroughs Speaks!” and “William Burroughs answers Jim Bishop.” Bishop wrote an article on the Newsletter entitled “Dope on Marijuana — By Mail.” In the editorial, he supported the enforcement of drug laws. “Cassidy’s Corner: pot market report” provided up-to-the-minute news on drug prices. “The Connoiseur’s Corner” was a “continuing column on grass grades of special interest.” Possibly, the editors (Randolfe Wicker, Ed Sanders, Peter Orlovsky, and C.T. Smith) heard of Burroughs and Corso’s Parisian pipe dream. Probably not, but Burroughs lived in New York City in 1965. He involved himself in the underground located on the Lower East Side. 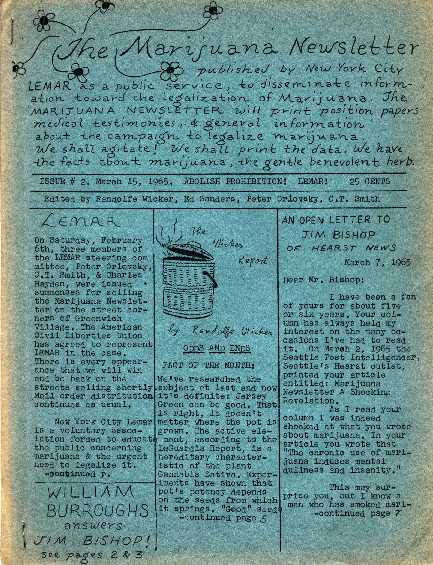 Interpol reminds me of another cult writer operating on the literary margins who made a foray into editing a literary magazine: Charles Bukowski. Many think of Bukowski as anti-literary, but throughout the 1960s he was quite the literary scenester. He was a fixture in the little magazine world and even active in the Los Angeles counterculture. His regular column, “Notes of a Dirty Old Man,” appeared in the underground paper Open City in the late 1960s. In February or March of 1969, Bukowski and Neeli Cherry (Cherkovski), later one of Bukowski’s biographers, edited Laugh Literary and Man the Humping Guns. It ran for three issues. In his biography, Barry Miles wrote, “It was his chance to rail against Creeley, Olson, and the Black Mountain School and sound off about anything he damn well pleased: he wrote rude remarks on people’s manuscripts before returning them, sometimes mutilating them in the process by smearing jam or wine on them.” Cherkovski’s biography contains quite a bit of information on the magazine for those interested. Laugh Literary proved irreverent and funny as well as publishing some quality writing by Bukowski and others. Copies turn up from time to time on the rare book market and they are worth a look for anybody interested in exploring a relatively unknown side of Buk. One can only imagine what the editorials of Burroughs would have been for Interpol. That is one magazine that I would love to own.