We here at RealityStudio can keep on giving thanks only to the generosity of others. In this case, it is once again that of Jeff Nisbet, who has been so kind as to provide us with access to his Fuck You/Ralph Ginzburg Archive. Please take the time to look through the pdf presentation Jeff created documenting the archive. One of the tantalizing aspects of that pdf is the single page provided of a longer interview that a journalist conducted with Sanders for inclusion in Ralph Ginzburg’s Fact. Thanks to Jeff, RealityStudio now has a pdf of the entire interview. 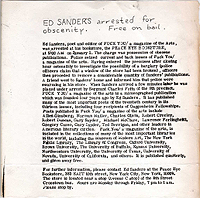 It is both interesting and unfortunate that what we have is a draft of the interview transcript. Unfortunate because it is difficult to read with all the edits but on the other hand they provide some insight to what the interviewer thought was important or not or what was too hot to publish. We see here the inner working of how an interview comes together. It is proof, if we need it, that interviews are rarely spontaneous, raw, or off-the-cuff. That said Sanders is pretty candid and upfront about sex, censorship, and drugs at a time when such things could mean jail time. Believe me, there is much talk of jail time. Ed seems rather unconcerned but the interviewer’s fear of repercussions by the government or police is obvious. The hammer would come down in January 1966 as Peace Eye was busted and Sanders faced obscenity charges. This effectively ended Fuck You, a magazine of the arts. As for the nuts and bolts on Fuck You, the interview provides some insight, such as on the number of copies or the price of production, but I was hoping for more. As Sanders seems to agree, there is too much focus by the interviewer on Sanders’ family. The interview seems somewhat unfocused for my tastes but feel free to judge for yourself. I am unaware of whether this interview or an article based on it appeared in the pages of a Ginzburg publication. I dimly recall that it did but I have yet to locate it. If anybody out there has a copy of Fact, Eros or Avant Garde with something on Sanders please send it along in the spirit of giving.

The interview reminded me of the time I tried to get Sanders to help me out with some Fuck You related projects. Here is the opening letter I drafted to Sanders:

I hope this letter finds you well. My name is Jed Birmingham. I am a contributing editor to RealityStudio.org, a website dedicated to William Burroughs, and to Mimeo Mimeo, a journal investigating all aspects of the Mimeo Revolution.

I was hoping to meet you at the show at the Arm, but was unable to attend. Dan Morris suggested that I write you about some projects I have been working on and that I hope will get your support.

On RealityStudio, I have written a few pieces on various aspects of Fuck You Press and Fuck You, a magazine of the arts. I enclose those pieces. The growing Fuck You Archive is one of my favorite sections of RealityStudio, and it is here that my project lies.

I hope to compile an annotated / illustrated bibliography of Fuck You Press. What I envision would be along the lines of Alastair Johnston’s trilogy of bibliographies (on White Rabbit, Auerhahn, and Zephryus Image) or the Something Else bibliography. I want to create a complete bibliography that also presents a narrative history of the Press and its publication. I would like to cover everything from detail entries on each publication, to a section on the mimeographs or presses used, to Peace Bookshop’s role in the Press, etc. Completeness if possible would be key. I would detail all the books and magazines, but I also want to list the handbills, one-offs, business cards, and other ephemera. I enclose some notes I have taken that would serve as the basis for future entries.

Does such a bibliography interest you in any way? In the future I hope to do archival research through letters and manuscripts in order to tell the story of the Press. I would also like to talk to you about gathering a complete list of Fuck You publications and, if possible, sit down and discuss them with you.

Do you know of any bibliographers who have started (or completed) a similar project? I know you are a historian yourself, have you worked on such a project yourself? Dan Morris mentioned to me that you would be interested in an interview with Mimeo Mimeo. Maybe that is the way to start.

I will end here as I do not want to burden you with a long letter. The attachments are long enough. Please contact me when you can about your feelings regarding a bibliographic project of this type. I hope to hear from you soon. 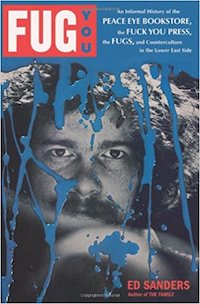 As I said the letter was a draft, which I never sent, because in fact I was able to attend the show at The Arm and talk to Sanders. He arrived hours early as did I and it was the perfect opportunity to talk to him. Turns out the garage where he stored his archive was leaking after a storm so he was pretty concerned about that, but in any case we got to talk a bit and he made clear that all my questions would be answered by his upcoming book on Fuck You that he was then working on. Well, I had to wait awhile but the book finally came out and much to my disappointment it did not include a full bibliography of the Press. As far as I know the archive on RealityStudio is the closest to a definitive bibliography that exists, but as I am well aware this archive is more fanzine in nature than scholarly journal. Hopefully it can provide the foundations to a thorough accounting with Sanders’ participation.

As for the interview, my memory is a little hazy but I think that after our talk Sanders agreed to consider my questions for Mimeo Mimeo. I promptly emailed them to him but never heard anything back. For anybody interested here are the questions I sent.

As a mimeographer did you have an aesthetics of printing? How would you describe your style? Who are your influences or idols as a printer?

In your experience, what are the primary benefits and limitations of the mimeograph?

Your glyph work in Fuck You, a magazine of the arts and elsewhere is some of the finest artwork in the mimeo medium. Who did you consider to be particularly gifted as a mimeographer?

In the Glyph show at The Arm, one glyph sequence charted the interrelationship between underground magazines, film, newspapers, and radical politics? What is the role of Do-It-Yourself publishing today?

What is your personal favorite item that you published be it magazine, book, or piece of ephemera?

With Fuck You Press, was there a poet, writer or book that you really wanted to publish but never did? Do you have any regrets of omission?

Do you or would you own a Kindle? What do you think of the predictions of the death of the book?

You still have your mimeograph machine in Woodstock. What would you print on it now if you had the inclination?

What use do ancient writing technologies like glyphs and hieroglyphics have for us in the 21st Century?

Who influenced your thoughts on glyphs and hieroglyphics? Olson, Pound, someone else? What did you take from them?

Did you have any discussions with William Burroughs about glyphs or hieroglyphics? For example, he published a poem with hieroglyphics in C: A Journal of Poetry. He studied Mayan codices much of his adult life.

You owned and operated Peace Eye on the Lower East Side. What do you see as the role of the bookstore in society? What are your thoughts on the decline of the independent brick and mortar store?

You are one of the foremost practitioners of poetry as performance. Who do you feel has been particularly successful in this area? What was the greatest reading you ever witnessed?

No questions about Sanders’ mother and father so I had that going for me but I guess it was not enough to capture Sanders’ attention. Maybe all this Sandersiana will capture yours.

Written by Jed Birmingham and published by RealityStudio on 11 June 2017.
Ed Sanders Fuck You Ralph Ginzburg