Book collecting is full of regrets and missed opportunities as much as exciting acquisitions. Previously, I wrote about some of my regrets: the biggest involving a complete set of Black Mountain Review. I have also had my share of books and magazines slip through my fingers through no fault of my own. These instances are especially frustrating. Recently, I missed out on a rare issue of Floating Bear magazine. Floating Bear Issue 24 rarely appears on the market. Most often collectors buy a complete or nearly complete run (around $600-$1000 depending on the number of issues present) thus obtaining Issue 24 which almost never appears for sale as a standalone issue, except for a couple of weeks ago. I saw the magazine for sale on Abebooks and fell over myself rushing to the phone to order. The order was placed and the credit card information exchanged. Seemingly, the wonders of the Internet never cease. Unfortunately, the bookseller emailed me back the next day stating that he could not find the issue after a day of fruitless searching. Ah, the hazards of the Internet. One of the joys and one of the advantages of actually combing a rare bookstore or browsing at a book fair is the excitement (and certainty) of holding the prized find in your hands as you pull it from the shelf. If you see it and can afford it, the book is yours. Sadly, such an experience is fading from the modern landscape like the men’s barbershop or the fully stocked tobacco shop. Places to relax, to mull over a purchase, and to spend an afternoon in the company of other people with similar interests seem doomed to extinction. 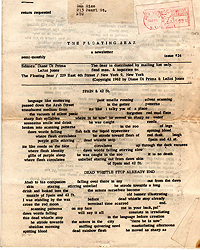 Back to Floating Bear. The magazine ran for 37 issues (38 if you include the Intrepid 20 / Floating Bear 38 issue). Complete runs are difficult to come by. The sheer number of issues (an unusually high number for a little magazine); the disposable, fragile nature of the mimeo format; the small print runs of certain issues; and the haphazard method of distribution (like Semina, by mailing list to select members of the literary and artistic underground) make for a scarcity of complete runs. Number 9 is the most famous issue due to the obscenity trial surrounding William Burroughs’ “Roosevelt after Inauguration” and Leroi Jones’ “The System of Dante’s Hell” in 1961. But Number 24 published in September / October 1962 is the rarest issue of Floating Bear. The reason Number 24 is so difficult to find proves to be a very interesting story that happens to involve William Burroughs as well as early 1960s amphetamine culture and a somewhat surprised mother.

In Recollections of My Life as a Woman, Diane Di Prima, coeditor along with Leroi Jones, revisits this episode in the history of Floating Bear putting it in the context of New York drug culture of the time. Soren Agenoux “was a dilettante hustler who made various kinds of collage and photo art, and wrote a little. Mostly he was into drugs, but then we all were in our own ways, so I paid no particular attention to that aspect of his life, just seen it as part of the whole picture: gay-artist-hustler-druggie.” Di Prima continues,

“Part of the deal when I sublet my apartment to Soren in September, was that he would take care of getting the next Floating Bear out. It was already typed; he was to print it on the Gestetner in the apartment, and get it in the mail: the labels were all ready. Instead he’d printed half the normal run on really cheap, thin paper, and mailed very few of those. Probably he used the rest of the money for dope. I didn’t ask. The copies he hadn’t mailed, which were most of them, got stored in somebody’s closet in Brooklyn, and were subsequently thrown out by somebody’s mother. I never got it all straight. To this day, Floating Bear #24 is an elusive and sought-after item.”

“When I left New York in September of 1962, I left the manuscript of Number 24 with a guy named Soren Agenoux, who was supposed to type it and mimeograph it and get it in the mail for me. I gave Soren enough bread to print a regular issue, but he spent part of it, naturally, so he ended up buying less paper and cheaper paper, and the copies didn’t stand up very well. He printed about 500 copies instead of the 1000 we were doing by then, and he mailed out about 200 and put the rest in some cardboard boxes in the closet of a house in Brooklyn where he went to stay. The house belonged to Jerry Ayres who now lives in Hollywood and works for one of the film companies. Anyway, Jerry’s wife decided one day that she wanted to clean her closet, and she threw out all the unmailed copies of Number 24, which is why it became the ‘scarce issue’ that libraries and collectors keep looking for.” 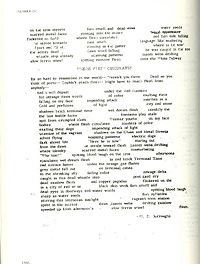 Soren Agenoux also published magazine on his own called The Sinking Bear which provides a fascinating look into the New York Underground. Di Prima writes, “[H]e did an endless number of parodies of the Bear called The Sinking Bear. He mimeographed them at the Judson Church in New York. They were a kind of gay version of the Bear, cliquey and full of local speed freak and theatre news. I don’t know how many Sinking Bears there were, but there were a lot, because Soren and his friends were very prolific and the Judson Church bought the paper.” In the last few years, I have casually pursued the elusive Sinking Bear. Despite what Di Prima says about there being several issues, I have never seen a copy up for sale. Soren Agenoux and Sinking Bear appear fleetingly in connection with the Andy Warhol scene of 1964-1965 (see Reva Wolf’s Andy Warhol, Poetry, and Gossip in the 1960s and Steven Watson’s Factory Made) as well as in relation to mail artist Ray Johnson and the printing of C Magazine by Ted Berrigan. Agenoux assisted with Interview magazine and also worked in the alternative New York theatre. In any case, Sinking Bear seems just as rare as Issue 24 of Floating Bear. I would love to read a copy as I picture it as something like Fuck You Magazine of the Arts in content and production value.

I have never seen Number 24 of Floating Bear either. It must be a sight. According to Di Prima, the paper was dreadful and this is saying something because my issues of Floating Bear (#5 and #9) are threatening to fall apart and are extremely thin. In addition, like the Fuck You edition of APO-33, there were difficulties in the mimeo process. Agenoux “probably didn’t know how to run the machine very well, so he got a lot of offsetting of the wet ink from one sheet to the next.”

Where does Burroughs fit it? Well it would figure that Burroughs appears in the rarest of Floating Bears, just to make a complete magazine collection from the 1960s even more difficult. The Burroughs appearance makes this issue even more desirable to collectors. Burroughs contributes “Spain & 42 Street,” “Dead Whistle Stop Already End,” and “Where Flesh Circulates.” Other contributors include Paul Metcalf (author of Genoa), the aforementioned Soren Agenoux, Leroi Jones (under the name Johannes Koenig) and George Montgomery (according to Di Prima there were two Montgomerys on the scene and she does not know who contributed). Metcalf’s piece deals with Charles Olson, who frequently appeared in the pages of Floating Bear.

Burroughs’ pieces are examples of his cut-up style. The text is formatted in a version of the three-column layout he used to great effect in the newspaper parodies in My Own Mag among other places. Burroughs’ work looks and reads more like poetry than anything else I have seen during this time, like the piece in Rhinozeros #5. As a result, the link to concrete poetry is marked. I think of the work like John Cage’s “Lecture on Nothing” or his “2 pages, 122 Words on Music and Dance” that are collected in Jerome Rothenberg and George Quasha’s groundbreaking America: A Prophecy Anthology. I say this merely because of the manner that they are presented on the page and not in terms of any content. The three prose-poems are related by phrase and appear to be cut-up versions of the same material. They read like pieces of the major cut-up trilogy, but again the formatting is distinctive for Burroughs: in this case the three columns separated from the newspaper context. The spaces between phrases were replaced by dashes in the cut-up novels as those books presented a visually more conventional block paragraph format. In a quick look at those novels, I could not find these pieces but I would not be surprised if they were cut up from the same material. For example, the phrase “dead whistle stop” appears in Nova Express.

Even if one has the money, a complete run of Floating Bear originals may be out of reach. They just do not come around very often. In addition, the difficulty finding certain issues, like Issue 24, makes piecing together a complete set a long waiting game. So how do I know so much about a magazine I don’t own as an original? 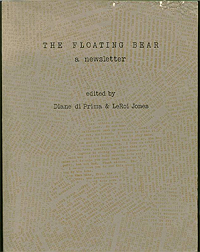 Fortunately, there is a less expensive, less frustrating (but in my opinion less rewarding and less fun) alternative. In 1973, Laurence McGilvery published a collection of the 37 issues of the solo Floating Bear under one cover with notes and an introductory essay. The additional material is fascinating and invaluable to anyone wanting to learn more about Floating Bear. The collection makes available tons of incredible work often published for the first time and in some cases the only time in the mimeo pages of Floating Bear. McGilvery’s publication is not cheap ($100-$200) and may not be the easiest book to find at a rare bookstore but copies are available on Abebooks. In addition, I have seen (and purchased) a copy on eBay in the last two to three years. In my opinion, the collection is a must-have, even if you plan on buying the original issues, because the fragile nature of Floating Bear makes them tough to handle and read. And the contents of Floating Bear demand to be read. Possibly no other magazine captures the spirit and power of 1960s alternative literature in a myriad of forms: poetry, plays, fiction, and essays.

I would like to see more reissue collections of an entire run of little magazines like the Floating Bear production. Unfortunately such publications are rarely undertaken and if they are, like in the lavish facsimile of the complete Semina, they are rare and expensive collectibles in their own right. At the other end of the spectrum are cheaper and less complete anthologies of pivotal little magazines. For example, Beatitude, Ole, and Intrepid all skimmed the cream and issued “best of” anthologies. There has to be a middle ground like in the case of Floating Bear that offers completeness and cheapness. A re-issue of Yugen would be very informative and interesting. In most cases size proves to be an issue. The 20 issues of Kulchur would be impossible to reproduce in a single volume of any manageable size.

The solution may lie in the Internet. The complete Aspen magazine has been recreated online as has the Psychedelic Review. A similar project with other important literary magazines would serve the casual reader and scholar alike. RealityStudio houses a step in that direction with cover scans of Fuck You Magazine and Yugen. A combination of scanned, photographed, and transcribed pages of their entire contents would cheaply and accurately recreate these fragile and valuable magazines for all to enjoy and use.