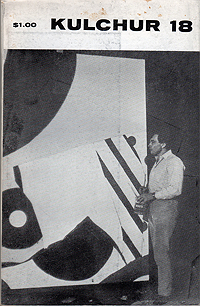 It is a thousand years since anyone had intercourse with a delicacy — the least attempt thought of possessing such a delicacy and it is “back to the branches, kid” — But what about in the house? “The house is a photo.” But what about the house itself? “Lost their enemy — permutate at different pressure — Slow the house merged created in silent concentration of the workers from The Land of Silence where speech is impossible –”

“Lucky bastards,” Bill always said as he walked around smoking Havanas and directing the work in color flash language of The Silent Ones — showing his plans –

You have to be free to remember he was under sentence of death in Maximum Security Birth Death Universe. So he sounded the words that end “Word” —

Eye take back color from “word” —

Uranium Willy The Heavy Metal Kid. Also known as Willy the Rat. He wised up the marks. His metal face moves in a slow smile.

To speak is to lie. To live is to collaborate. “But what is he painting?” Arrgh, it’s a theater full of people suffocating. “I got you — keep it practical and they can’t — ”

“I am dying, Meester?” Shift coordinate pint. Half your brain being blind turned off the lights — could give no information other than wind identity fading out — a long time between clock hands and rose wallpaper rooms of dead flesh — money he gave me to buy equipment — and being blind may not refuse the maps to by blood whom I created — “Mr. Bradley Mr. Martin” Dec. 7 1941, Sept. 18, 1899 —

Fade out to a shabby hotel near Earl’s Court in London. Uranian Willy, The Heavy Metal Kid, now known as “Willy the Fink” to his former associates, is posing as a writer. He has written a so-called pornographic nvoel called Naked Lunch in which the Orgasm Death Gimmick is described. He was not out of the Security Compound by a long shot he had rubbed off the word shackles –.

How do you make someone feel stupid? You present to him all the times he talked and acted and felt stupid again and again any number of times fed into the combo of the soft calculating machine geared to find more and more punch cards and feed in more and more images — the images have electro-magnetic patterns — that is any situation that causes rage will magnetize rage patterns and draw around the rage word and image recordings-

Time to move on — Word is flesh and word is two and that is the human body is compacted of two organisms and where you have two you have word and word is flesh — Loneliness is a product of dual mammalian structure — “Loneliness,” “Love,” “Friendship,” all the rest of it — I am not two — I am one — But to maintain my state of oneness I need twoness in other life forms — Other must talk so that I can remain silent — Hassan i Sabbah has wised up the marks —

The Gimmick of The Death Dwarf: supersonic imitation and playback so that you think it is your own voice — (do you own a voice?) — You know you are in the right — in the “write” — so long as you have the inside your speech center say “I am in the right” — So Rot flashes around the world —

Does not take part in nor instigate experiments defining pain and pleasure thresholds — the Technician used abstract reports of the experiments to evolve the formulae of pain and pleasure association that control this planet — had material form purge trials and concentration camps and reports and photos from Nagasaki and Hiroshima — Photo falling — Word falling — With most precise data coming from Lexington, Kentucky report on the withdrawal experiences of drug addicts — with pain and pleasure limits defined and the juxtaposition formulae set up it is fairly easy to predict what people will think in a thousand years or as long as the formulae remain in operation —

Are These Experiments Necessary?

Well, that’s about the closest way I know how to tell you — My writing arm is paralyzed — had enough slow metal — And I go home having lost — so get your heavy metal ass in a space ship rustling across city desks — you yourself are Mr. Bradley Mr. Martin — you ever had a delicacy? — know who I am?