A Follow-Up to “Charles Bukowski, William Burroughs, and the Computer”

I would like to take this opportunity to thank Jed Birmingham for his courteous offer to submit this correction to his essay “Charles Bukowski, William Burroughs, and the Computer.” The premise of his essay was that, to his knowledge, Burroughs seems to have avoided using the computer for any of his creative work. “What would Burroughs have done,” Birmingham writes, “with an Ian Sommerville-type collaborator who knew the nuts and bolts of computers and the Internet, was aware of their philosophical and cultural implications, and also possessed a desire to expand the medium creatively? Like many on the forum at RealityStudio, I wonder what if? It was not to be.”

Happily, I can say that it was to be. I am privileged in this life to have been a friend of William Burroughs and also a collaborator on his visual art — using the medium of the computer. In 1995 I worked with Burroughs on a series of three-dimensional computer-generated stereograms (similar to the Magic Eye images of the 90s) based upon sampling his paintings. William guided me in the process of what to select for input into the computer so as to obtain results that he thought would be appropriate for this visual holographic cut-up collaborative experiment.

One of these images was selected for display in the landmark Ports of Entry exhibition at the Los Angeles County Museum of Art in 1996 and was documented in the accompanying book Ports of Entry: William S. Burroughs and the Arts on page 149:

… in 1995, Burroughs joined with computer animator Roger Holden in producing a series of computer-generated stereograms created by digitally scanning a detail of one of Burroughs’ paintings into a computer, color-enhancing it, and printing it with a laser printer. When viewed with relaxed and slightly crossed eyes, the three dimensional effects of these “cybernetic cut-ups” form imaginary landscapes of extreme intricacy and depth not unlike those imagined works described by Burroughs in 1981 [in Cities of the Red Night] as made by “some lost color process… used to transfer three dimensional holograms onto the… pages. You ache to look at these colors.” 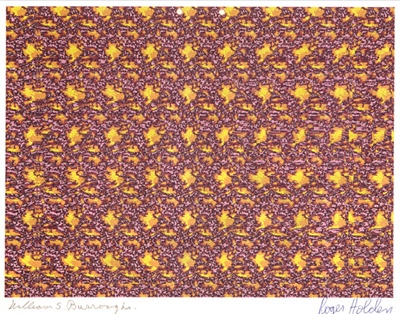 Quoting from an article from the University Daily Kansan October 28, 1996: “Steve Goddard, curator of prints and drawings at the Spencer Museum of Art, said that Holden’s collaboration with Burroughs was a good example of how Burroughs has continued to stay involved with contemporary trends in art. ‘It’s a very interesting piece that shows Burroughs’ relevance in the Cyberpunk world of computer art,’ Goddard said. ‘His openness in collaborating with other artists demonstrates how he accepts what is unfolding at the moment.'”

I am an inventor who has been aware of the philosophical, cultural, and audiovisual implications of the computer since 1976. I have always desired to expand this medium creatively. In 1982, for example, I designed the animation computer system used by PBS’s Emmy-winning children’s series Reading Rainbow to film their feature books for the first 5 seasons. Rogerreadingrainbow.com is my Reading Rainbow site.

I first met Burroughs formally in 1986 through his best friend and business manager James Grauerholz. In 1988 I produced a music video tribute to Burroughs which aired the same year on the USA Network series Nightflight and also on MTV in 1990 on their first internationally broadcast series, Buzz. It should also be mentioned that throughout the years I was given two wonderful cats by William. One was the White Cat mentioned in Last Words: The Final Journals of William S. Burroughs and in the text on inter-zone.org.

One day when I was visiting Burroughs in the early 90s, he said “Roger, I want to show you the painting I finished today. It’s called Jack the Ripper.” Looking, I discerned that it consisted of reddish paint splotches and twirls on a white canvas. William then said, “Do you see Jack?” I looked carefully and replied, “William, I might sense the ambience of Jack in an abstract sort of way.” Immediately he said, “No! No! No! Do you see Jack?” I said I didn’t, but please show me. He then pointed to a specific area, a small area toward the bottom right side of the painting. Sure enough, I did see it, a leering evil face with a derby hat on top of his head. It was cartoon-like, somewhat warped in appearance but immediately recognizable. Burroughs then turned the painting upside down. In the same exact area where I had previously seen Jack the Ripper he pointed and said assuredly, “There’s his victim.” He was right. There was an equally vivid warped caricature of a woman’s face grimacing in an expression of horror! It was absolutely amazing to witness this, as it was a prime example of what he would call a “Port of Entry” into an image. William painted with a faith that his process of painting could serve as a vessel for evocative magic. These emerging images were searched for and discovered only after he painted the entire canvas. Naturally, after that experience, I wished for the day that we could collaborate using the medium of the computer in a likewise visual and shamanistic manner.

I would discuss my computer audiovisual interests frequently with William. One day he called and asked to visit my animation studio, Magic Visions. During the studio visit, I demonstrated a stereoscopic 3D image of a cat sticking its head outside of a computer monitor. On other occasions we might discuss such things as a computer-assisted visual prosthesis project I had received a grant to pursue or my computer-assisted holographic projection efforts. This type of discussion about computers (i.e. 3d stereoscopic imagery, sensory substitution) clearly engaged his interest because we were talking of a direct melding of the mind and computer through altered perceptual states. For example, discussions such as how would blind people perceive such a computer-generated tactile image vibrated onto the skin or how they might perceive a three-dimensional computer-generated audio environment. The studio visit, audiovisual computer discussions and demonstrations eventually led to the following 1994 inscription written for me on the inside cover of his Kurt Cobain CD collaboration, The “Priest” They Called Him, “for Roger Holden, who always has tomorrow’s ideas today.” 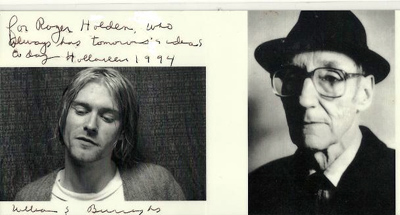 As 1994 wound up, I noticed his great interest and enjoyment of computer-generated stereograms. I had previous experience creating some of these myself so I asked him if we could collaborate together by incorporating some of his paintings into computer-generated 3D stereograms. His immediate reply was, “By all means, yes! Lets see what happens.” I first started on the project by using the entire painting as a source. Not much seemed to be happening with that approach. The output was thin and difficult to discern in 3D. Burroughs then directed me to incorporate small samples of his paintings into the computer rather than just simply inputting the whole thing. This was when we struck our pay dirt, as exciting bold 3D shapes began to emerge.

Our collaboration was a true “all into cyberspace” experience for both of us. These images allow for a direct altered state of visual perception just as the Magic Eye images do. However, rather than simply entice you with just a dolphin or 3-D heart, the cybernetic cut-up images can be used to experience directly certain information processes of the mind — specifically, those processes that can form our visual sense of the 3D outside world from the input of even the simplest of sampled information.

William was extremely enthusiastic about this collaboration and equally enthusiastic about the results. In essence, samples of his paintings were input as viral info elements into a 3D computer stereoscopic process. The 3D Cybernetic cut-up output resulted in complex holographic-like landscapes and objects. Our collaboration, including studies, involved more than a dozen images. Like all such attempts in art, some worked out better than others. A special few seemed to demonstrate some intriguing synchronicities. I hope to publish someday a compendium of these studies and completed images.

6 thoughts on “Collaborating on the Computer with William S. Burroughs”