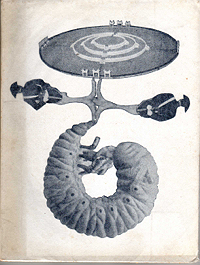 Caesar’s Gate: Poems 1949-1950. By Robert Duncan. Divers Press, (Palma de Mallorca), 1955. Softcover. First edition. With collages by Jess Collins. Octavo. White coated pictorial wrappers. An edition limited to thirteen copies, marked A to C and 1 to 10, each with an original collage and poem, signed by the artists; and two hundred copies for regular distribution. 64 pages

“Robert Duncan, with his life companion, Jess Collins, arrived in Palma towards the end of March 1955. For a long time, Creeley entertained sharply divided feelings about the homosexual poet from San Francisco. While admiring his craft, he felt repulsed by his Byzantine pomposity” (Faas). Duncan’s poetry, like “The Venice Poem”, and his wide-ranging and erudite conversation quickly won Creeley over, so much so that Duncan became a contributing editor to Black Mountain Review, and Creeley agreed to publish a collection of Duncan’s poems from 1949-1950 as a Divers Press title. Duncan paid for the cost of printing himself and it has the air of a vanity project with the elements of Byzantine pomposity that initially repulsed Creeley. Caesar’s Gate with its numbered and lettered additions complete with original collages and poems does not feel like a Divers Press book at all. Creeley described a Divers Press title as “delicious.” And they undoubtedly are, like a hearty peasant meal. There is substance and an earthiness in the classic Divers Press offerings. On the other hand, Caesar’s Gate as an object is a confection, precious and refined.

Caesar’s Gate would prove to be the last publication of the Press and something of a slap in the face to Ann. Ann despised Duncan’s poetry and she found Jess’s illustrations especially appalling. “I did not like his poems and scarcely looked at them. The pictures also were disgusting and some were blasphemous, so I thought that perhaps Luis Ripol would refuse to print it, but he didn’t mind.” Although Ann claimed to be sympathetic to Duncan as a person and to enjoy his conversation, Duncan was less than sympathetic in return and felt Ann held Creeley back as a writer and editor. Ironic, in that Ann with her personal and financial support in many respects made Creeley’s life as a poet, and Divers Press, possible. “[Duncan] gave the coup de grace to whatever fondness and respect Bob still entertained for Ann” (Faas). Likewise, the publication of Caesar’s Gate served as Divers Press coup de grace. Divers Press was publishing house that extended out of the Creeley’s domestic life. With Caesar’s Gate, Duncan upset that balance. Duncan took over the publishing house and soon after dominated the household as well. The process of making the elaborate book kept Creeley and Duncan in constant contact and eventually Duncan’s poems and intellect, the life of poetry, proved more powerful and alluring than pull of the domestic with Ann. In such a situation, Ann’s affair with painter Victor Kalos proved insurmountable. The Creeleys separated soon after the publication of Caesar’s Gate and officially ended their marriage in 1956. Divers Press, an expression of the Creeley’s marriage, ended in divorce.