Burroughs appeared twice in the jazz magazine Metronome. In May 1961, Metronome published “No Bueno” from Soft Machine. In August 1961, “This is the Time of the Assassins” appeared. These appearances are quite unusual as this is quite early for a mainstream magazine to publish Burroughs particularly a difficult work like Soft Machine. The editorial comment stresses the connection between junk and jazz with Burroughs’ pieces deglamorizing the heroin scene. Even in jazz circles, Metronome was far from cutting edge. By the 1960s, Metronome presented a fairly standard view of the jazz scene heavy on traditional aspects like swing, bop and easy listening jazz with little focus on the avant-garde work of John Coltrane and Ornette Coleman. In all ways, the magazine is rather conventional: plain layout, fairly boring cover art, standard jazz articles. 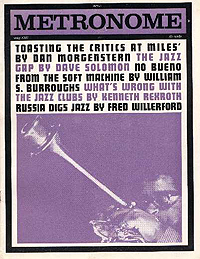 Yet the appearance of Burroughs in the magazine highlights an aspect of Burroughs’ writing often overlooked. Kerouac is usually thought as the bop writer with his theory of spontaneous composition and readings to jazz accompaniment. Many of Kerouac’s works show the influence of jazz, particularly his poetry, like Mexico City Blues which ends with several choruses dedicated to Charlie Parker. Kerouac’s novels also depict jazz sessions and talk about jazz music. Kerouac’s descriptions of clubs and musicians in On The Road and in various short stories are among the best in the history of modern literature.

The influence of jazz on Burroughs would appear to be first and foremost Burroughs’ adoption of the jazz lifestyle dominated by heroin and marijuana. Figures like Charlie Parker and Thelonious Monk blowing on 52nd Street played a part in Burroughs’ fascination with the drug underworld just as Herbert Huncke and Times Square scene did. But the influence of jazz goes deeper than that and permeates Burroughs’ mature works like Naked Lunch and the cut up novels.

The soundtrack of Burroughs’ novels would appear on the surface to be the eerie music of Marrakesh. Yet the organization of the routine suggests the composition of jazz music. Like with Kerouac, critics have pointed out the hint of bop in Burroughs’ routines. The Burroughsian routine is a fantastical improvisation on a theme, like a solo by Bird Parker. In bop, improvisation is essential, and the improvised solos are always built according to a template provided by composed material (chord changes and melody). This view stresses Burroughs’ reliance on existing literary structure in order to maintain meaning and coherence. The book opens and closes with a similar scene. Between the beginning and ending are a series of improvisations of the themes of control and addiction. Statement of theme, improv, climax, return to theme, new improvisation until close of theme. The cut-up novels use repetition of key phrases, words, and scenes in much the same manner. Meaning is transmitted through these repetitions and patterns. Similarly, reader interest and comprehension is focused by the circular nature of the novels’ constructions. Pretty alarming image: the King of Beat Cool blowing hot bop jazz.

This relationship between Beat composition and jazz composition has been well documented but I think the linking of Burroughs with bop does not quite fit with the radical nature of his work. The structures of bop dovetail well with Kerouac’s more traditional novels. Burroughs’ work relates better to less structured elements of jazz developing in the early 1960s and 1970s.

Throughout his career, Burroughs rubbed elbows with the jazz world, most notably with Ornette Coleman. Both Coleman and Burroughs appeared in the 1966 freak-out Chappaqua directed by Conrad Rooks. Burroughs plays Opium Jones and Coleman appears as a Peyote Eater. Coleman was commissioned to provide the soundtrack but his Chappaqua Suite was ultimately not used. Ravi Shankar co-wrote the score with Philip Glass. Burroughs’ voice appears briefly on the soundtrack stating, “An unworthy vessel, obviously, I withdrawal from the case.”

More substantially, Coleman and Burroughs traveled to Morocco in 1973 to perform with and record the Master Musicians at Joujouka. Previously, Burroughs attended a similar performance with Rolling Stone Brian Jones. Burroughs wrote of his 1973 trip with Coleman in Oui magazine in a piece initially titled, “Goat God Out of Site.” The typescript of this article sold at the Edwin Blair Sale at Pacific Book Auction earlier this year for close to $3000. Craig Karpel wrote a piece on Burroughs in Morocco and at the performance which also appeared in the same August issue of Oui. The recordings made with Brian Jones and later Ornette Coleman have been issued on LP and CD over the years. Sub Rosa Records in particular has released much of the 1973 Joujouka material most notably in the 1987 LP Break Through In Grey Room. For a piece of this recording and other Burroughs sound bites, see ubu.com.

Given the history between Burroughs and Coleman, it is not surprising that David Cronenberg hired Coleman to provide music for the 1992 Naked Lunch soundtrack. Coleman teamed up with Howard Shore and composed several pieces such as Hauser and O’Brien / Bugpowder, Intersong, Ballad / Joan, Cloquet’s Parrots/Midnight Sunrise, and Writeman. As I remember (it has been a while since I heard it), the soundtrack combines elements of the New York jazz sound of early Coleman like Something Else and Free Jazz with the Joujouka / North Africa music thus paralleling the geographical movement of the film from New York to Interzone / Tangier.

I know precious little about jazz, especially the jazz theories of Ornette Coleman, but it appears to me that Coleman’s experiments in Free Jazz and harmolodics in Shape of Jazz to Come of 1959, Free Jazz of 1960 and Skies of America / Science Fiction in 1972 relate to the theories behind the composition of Naked Lunch and the cut-ups. Anyone with a clearer understanding of Coleman’s theories please support or discredit what follows as this is just speculation at this point.

Coleman’s harmolodics as well as theories of free jazz loosened the reins on melody, harmony, and musical structure. On free jazz see Wikipedia. On harmolodic theory, see the liner notes to Ornette Coleman, Beauty Is a Rare Thing. In Free Jazz, Coleman sought to establish new means of structuring jazz instead of abandoning structure altogether. Wikipedia states, “Free jazz almost by definition dispenses with such structures, but also by definition (it is, after all, ‘jazz’ as much as it is ‘free’) it retains much of the language of earlier jazz playing. It is therefore very common to hear diatonic, altered dominant and blues phrases in this music. It is also fairly common for a drone or single chord to underpin a performance, but the absence of such rudimentary devices is typical as well” In Naked Lunch, Burroughs reduced the importance of plot and narrative (the basic building blocks of the traditional novel) in order to create an anti-novel that used repetition of theme, phrases and even actions to hold the whole together. The rudiments of plot and narrative remain like in the police chase elements that open and close the novel but they are abandoned for improvised routines if need be. The classic structure of a beginning, middle and an end is loosened to the breaking point. The abandonment of novelistic structure is even more pronounced in the cut-up trilogy. The cut-up novels incorporate the droning aspect of free jazz in its repetitious nature and cultivation of boredom in the reader.

Wikipedia continues, “Other forms of jazz use clear regular meters and strongly-pulsed rhythms, usually in 4/4 or (less often) 3/4. Free jazz normally retains a general pulsation and often swings but without regular metre, and often with frequent accelerando and ritardando, giving an impression of the rhythm moving in waves. Often players in an ensemble adopt different tempi. Despite all of this, it is still very often possible to tap one’s foot to a free jazz performance; rhythm is more freely variable but has not disappeared entirely.” The concept of free jazz highlights more than the structured bop the formlessness, aggressiveness, and dissonance of Burroughs’ work. Such a view grants Naked Lunch and the cut-up novels their radically disorienting nature instead of demanding that the novel always make sense. Burroughs work like Coleman’s music seems to flow and move in waves washing over the reader impressionistically. Burroughs looks beyond the traditional novel structures while still trying to hold the reader’s attention. With the cut-ups this seems a game of brinksmanship. Who will blink first — Burroughs or the reader. This seems to be exactly what Coleman was attempting in his music of the early 1970s.

As touched on above, both Burroughs and Coleman seek to break down the control systems of music and language. In Coleman’s music, no one musician controls the group but instead each musician reacts to music around him. Coleman states, “In the music we play, no one player has the lead. Anyone can come out with it at any time.” In Naked Lunch, Burroughs distances himself from authorial control over the text by stating that he did not remember composing the novel or by encouraging the reader to jump into the book at any intersection point. The sabotage of authorial control is even more pronounced with the cut-up technique. This is extremely similar to Coleman’s concept in free jazz and harmolodics.

Interestingly, Burroughs’ Naked Lunch may be even more influential on the development jazz than the work of Jack Kerouac. Like Coleman, Burroughs has been dismissed as a charlatan who writes formless novels that don’t mean anything. In any case, the relationship between Burroughs and jazz needs to be explored in more detail as such an analysis will no doubt allow readers and scholars to hear Burroughs more clearly.