Did you know that Neil Young and Rick James were in a band together? I had no idea. I stopped in a local record store to take a look at a beautiful copy of Timothy Leary’s first LP, The Psychedelic Experience, on Broadside, and got into a conversation with the owner about eBay and legendary vinyl rarities. As a Neil Young collector, he said the holy grail was a single (I think) by a band called The Mynah Birds which featured Rick James as the lead singer and Neil Young. The band briefly signed with Motown in 1965-1966 before James had to turn himself in to the FBI, because he was AWOL from the military. Apparently, the band had time to cut a couple of forgettable singles. Young left Toronto with fellow band member Bruce Palmer to form Buffalo Springfield in Los Angeles. James became a Super Freak and the rest is history.

One of the reasons I began collecting Beat Generation vinyl was to avoid stoppers like the Neil Young record. A complete Burroughs book collection presents many challenges due to the fact that some items are just out of reach to the average collector because of rarity or price. When I started collecting Beat Generation vinyl, a couple of hundred dollars seemed like the ceiling in price and every record dealer possessed a record I needed. After a year or two, I have discovered that even Beat vinyl possesses the unattainable.

For the Burroughs collector, the limited edition Ali’s Smile published in 1971 by Unicorn Books is one of the rarest Burroughs items. One of 99 copies, this book was signed and numbered by Burroughs, but for the vinyl collector it was issued with a 12″ LP of Burroughs reading the second draft of Ali’s Smile. Side B contains miscellaneous data about the recording process and is at 78rpm. Ali’s Smile was written in the 1960s and was not generally available to the public until it was included in Exterminator! in 1973. This is not to be confused with The Exterminator published by Auerhahn Press in 1960. The Exterminator is a collection of early cut up experiments with Brion Gysin. I have seen the book available without the LP and the LP available without the book. The book by itself is over $1000. The complete item can command up to $7000 on the rare book market. For those unwilling or unable to pay those prices there is a less expensive alternative. Ali’s Smile is available on the Vaudeville Voices CD that combines Call Me Burroughs with Ali’s Smile. This CD is not the easiest thing to get a hold of either as it is out of print. In addition, there was some controversy regarding the copyrights or permissions surrounding the CD so it may have been pulled from stores in the 1990’s. 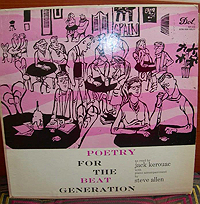 The ultimate Beat Generation collectible on vinyl might be Jack Kerouac’s Poetry of the Beat Generation on Dot Records. Attempting to capitalize on the bestselling On the Road of the fall of 1957 as well as the West Coast craze for jazz poetry readings, Kerouac began a short, troubled career as a spoken word artist. In December 1957, Kerouac signed up for a multiple date engagement at the Village Vanguard. Kerouac lasted about a week. His first show was an out and out failure. Audiences failed to respond to Kerouac; Kerouac was nervous and unsure in his performance; and the musicians just did not mesh with Kerouac. In the second performance, Kerouac read with TV personality Steve Allen playing piano in the background. Kerouac found his voice and his sideman. The decision was made to cut an album. Kerouac and Allen worked with Allen’s friend Bob Thiele who was a producer at Dot Records. 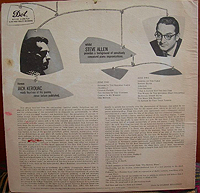 Kerouac showed up at the recording studio with a bottle of rotgut wine and read with Steve Allen for about an hour. The recording engineer congratulated Kerouac on an excellent first take. Kerouac responded that it was the only take. According to the philosophy of spontaneous prose and first thought best thought, Kerouac sought to capture the spirit of his initial creation. Kerouac read both short and extended pieces. “October in the Railroad Earth” is especially wonderful. The entire LP is fresh and alive showing Kerouac to be an accomplished performer of his work. As an example of jazz poetry readings, Poetry of the Beat Generation might be the finest example and it remains to this day one of the best spoken word albums of all time.

It almost did not see the light of day. Randy Wood, Dot President, heard the record just before its release to the public. He was outraged by the frank language and subject matter. Today the record seems tame. Wood declared the record obscene and stated that he would not let his son listen to it. Wood believed that every record on his label had to be family entertainment and suitable for children. He ordered the record to be destroyed. Fortunately for collectors 130 copies (Dot 3154) were sent to reviewers before Wood’s announcement. Copies have survived over the years but the LP is incredibly rare. I saw a copy on eBay years ago that sold for a couple thousand dollars. I have not seen a copy since.

Thiele and Allen left Dot Records with the master tape and formed Hanover Records. The Kerouac album was released intact on Hanover in June 1959. Kerouac released another LP on Hanover called Blues and Haikus with Zoot Sims. Soon after Kerouac released another LP on Verve titled Reading by Jack Kerouac on the Beat Generation. All these albums are highly sought after fetching $100-$200. These records are now available on CD on the Kerouac Collection set.