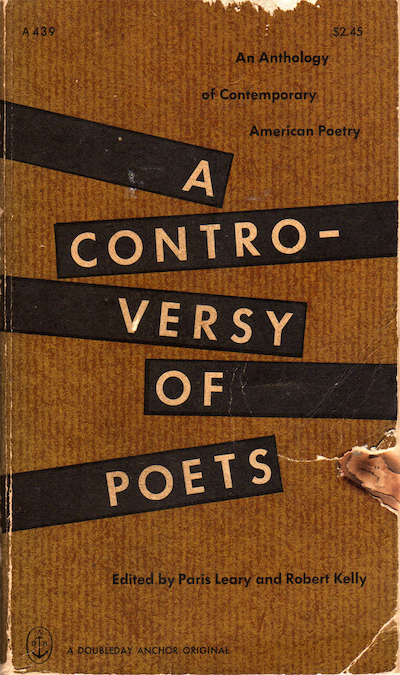 I am going to take a break on Burroughs here for a second and focus on another interest of mine: Charles Olson. A few years ago a friend from my used bookstore days gave me a call and offered up three boxes of little magazines from the fifties to the eighties. He did not have to offer twice. I rushed to the store and picked them up. I was like a kid at Christmas. Some of the magazines related to Burroughs, like Big Table and The Chicago Review, and as a result fed right into my book collection. Over time what has proven far more interesting and educational for me are all the magazines that do not feature Burroughs. These magazines were the core of a library dealing with the New American Poetry outside of the Beats. The collection strongly felt the influence of Pound, Williams, Zukofsky, and Stein. The father figure poets were Robert Duncan, Jack Spicer, and Charles Olson who inspired second and third generation San Francisco and Black Mountain schools.

Most of these magazines, like sixteen of the twenty issues of Caterpillar, a reprint of complete Tish, the first four issues of Sulfur, isolated issues of the Henry Rago edited Poetry, and a nice run of Io, were completely new to me. Reading Ron Silliman’s blog late last year encouraged me to give these magazines a closer look. To pour over them, in fact. The boxes were full of absolute gems. Some interested me on a collecting level like the Baseball Issue of Io (Number 10) (featuring Stephen King’s second appearance in print). Others provide material on poets that I am dying to learn more about like the Jack Spicer issue of Caterpillar (Issue 12). This is required reading after finishing Spicer’s Vancouver Lectures edited by Gizzi and the Spicer biography, Poet Be Like God. The first three issues of Sulfur featuring letters between Edward Dahlberg and Charles Olson were a welcome discovery. These three boxes are a complete wonder and a re-education.

I want to focus on one book in particular, because like the inscribed copy of the Olympia Ticket That Exploded it tells an important story in literary history. As I picked up the boxes, my friend pulled out a worn out copy of A Controversy of Poets, an anthology edited by Robert Kelly and Paris Leary. He pointed to a cigarette burn the size of a dime and told me that the stain was from the cigarette of Charles Olson, possibly set aside as he launched into one of his legendary riffs that could very well touch on and explain Everything.

Sadly, Olson died of cancer in January of 1970, but I always have associated a cigarette with the man. The prop is part of his myth, like his physical size. My view of his late night, if not all night, discussions is veiled in smoke. His hand, as it gestures and pokes and prods (like his words and thoughts,) always clutches the tail end of a butt. The Ann Charters photograph of Olson in Gloucester on the cover of the University of California Press The Maximus Poems is a case in point. 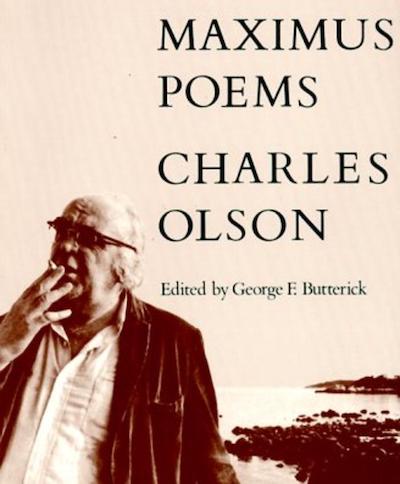 A closer look at the anthology lends credence to my friend’s claim. The book bears the ownership inscription of Gerrit Lansing. Lansing is a poet and scholar residing in Gloucester. In the early 1960s, he edited SET, an important magazine that ran for only two issues, but like Vincent Ferrini’s Four Winds before it, placed Gloucester on the map as a polis for publishing poetry. SET was featured in Secret Location on the Lower East Side. Naturally, Lansing knew Olson well. In 1960, Lansing helped arrange a reading for Olson at the house of John Hays Hammond, Jr. Lansing has addressed the Charles Olson Festival. In addition, Lansing provided the introduction to Ten Pound Island Books’ (bookseller and author Greg Gibson’s publishing venture) publication of Olson’s Letters to the Gloucester Times. Lansing wrote, “It was the eyes I noticed and was noticed by when I first came on the man sitting behind the kitchen table at 28 Fort Square. You climbed the paint-cracked wooden stairs outside the 2nd floor apartment and through the glass of the door you saw the kitchen table, crowded with books, dishes, coffee cups, saucers of spent cigarettes, newspapers and manuscripts.” Roughly a decade later, Gerard Malanga stayed at Lansing’s home when he interviewed Olson in Gloucester. The interview appeared in the Paris Review shortly after Olson’s death. Possibly Lansing, Olson or Malanga brought the anthology to the interview where it got damaged “in the kitchen on the table cluttered with beer cans, cigarette and cigar butts, and unanswered correspondence.” Over the years, not much had changed regarding the clutter on the kitchen table in Gloucester.

A Controversy of Poets tells an interesting story without the cigarette stain. Much has been made over the politics of anthologies and their role in canon formation. For example see these essays by Marjorie Perloff and Christopher Kuipers. In the late 1950s to the mid-1960s, three anthologies attempted to spread their version of the gospel. In 1957, Robert Pack, Louis Simpson, and Donald Hall edited New Poets of England and America. The placement of England before the United States tells you something of their vision of the new and important in poetry. The anthology looked back first and foremost to England and Europe for its tradition. The anthology placed the future of poetry firmly in the hands of formalists like Thom Gunn, Ted Hughes, Philip Larkin of England. The editors also place their faith in Americans such as Sylvia Plath who had close ties to Great Britain in their poetics if not personal lives. Olson does not appear in this anthology. The poetics of Pound and Williams championed by Olson found no favor here. Olson’s expansive view of form expressed in Projective Verse (1950) clashed with the closed forms favored by the featured poets.

In 1960, Donald Allen responded empathically with the New American Poetry anthology suggesting a new version of contemporary poetry as well as a tradition rooted in Pound and Williams. The next generation of poets would be from Black Mountain, New York, San Francisco or On the Road (Beat Generation). Don Allen gave Olson pride of place in this anthology. Olson, older than the other poets, appeared first and his poetic theories dominated the appendix of the volume. Clearly, Allen believed that Olson’s Projective Verse heralded the new in American poetry. Olson presided over the anthology like a father figure. 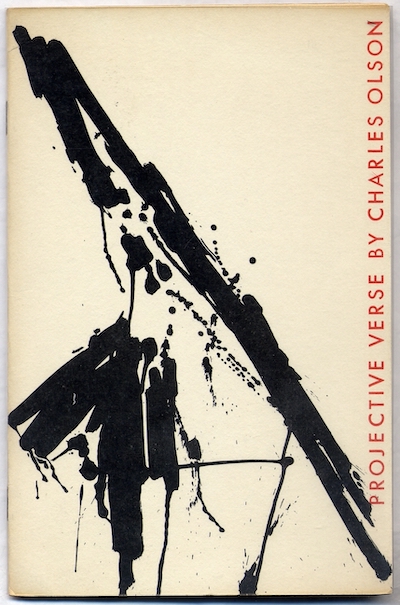 A Controversy of Poets published in 1965 attempted to provide both arguments in one volume. Paris Leary represented the formalists and Robert Kelly, editor of Trobar and then a Deep Image poet, edited the new radicals. As Ron Silliman makes clear, Kelly redefined in his image just who those new radicals were. Gerrit Lansing made it into A Controversy of Poets and Olson remained in as well. Once again the Black Mountain School faired very well. Black Mountain poets appear often in the anthology. Additions like Lansing and a host of other Olson influenced younger poets speak to Olson’s strong presence. So once again Olson made his mark on contemporary poetry. The cigarette stain marks his presence in the volume and his hold on the poetry community.

Yet Olson no longer stands tall as “the” dominant figure. Olson’s voice blends in with a chorus of others unlike in the Allen anthology where Maximus threatens to drown out the other poets. In addition the anthology shows that by 1965 Olson appeared as an establishment figure and someone to be reacted against. Jack Spicer felt that way and expressed his views in the Vancouver Lectures comparing Olson to President Johnson. I feel that Bukowski and the blue collar / skid row school viewed Olson in that manner. Younger poets sought to knock Olson off his pedestal. Kelly’s anthology begins that process. Therefore, the tobacco stain can be viewed as an act of dismissal or disapproval towards his threatened position in the poetry world. An anthology that challenges Olson’s pride of place was nothing more than an ashtray that Maximus would relegate to the dustbin of literary history.

This is all playful speculation. As my friend reminded me, “Then again it might only be a misplaced fag at the end of a long night of smoke and drink.” But clearly, A Controversy of Poets speaks volumes as content and object. In any case the book has become very special to me. Reading about Olson, almost all commentators agree that he was a larger than life figure with a super-human appetite and intellect. The anthology makes me wonder just what it would be like to take the full force of Olson for an evening: the cigarettes, the alcohol, the talk. Most of all the talk, as Olson welded it like a weapon with the power of a blunt instrument. The Maximus LP by Folkways gives little hint of his strength. Could I withstand the onslaught? Could I hold my own? And most of all would I understand what the hell he was talking about?

5 thoughts on “A Controversy of Poets”