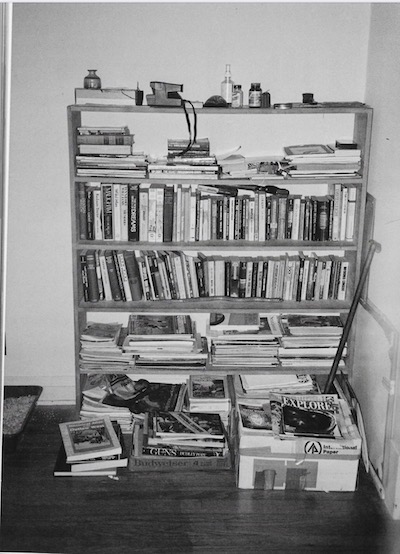 Thanks to Jed Birmingham’s piece about my book collection from his Burroughs Collectors series on RealityStudio, a member of Jeff Ball’s Burroughs & Associates group on Facebook, Marcus Gray, posted a picture of Burroughs’ bookshelf he had found in Chris Stein’s photo-memoir, Point of View: Me, New York City, and the Punk Scene. Stein states in the text that the picture was taken during a trip he took to see Burroughs in Lawrence, KS in 1976, but as Marcus Gray rightfully pointed out, 1986 is the year that Chris Stein visited Burroughs in Kansas. First, Burroughs wasn’t living in Kansas in 1976, and after careful analysis of the picture, it is obvious that these were the books from Burroughs’ Kansas library, and many of the books are from the 80s with the latest copyright date being 1986.

I’ve compiled a list of 69 books with accurate bibliographic information down to edition at least, and I’m going to include that list here, but I did want to say a few things first. The day Marcus Gray posted this image, I ordered the book. I’m ashamed to admit how I did it, but I’m not ashamed to admit that I had it the very next day. I spent many hours poring over the picture and looking up images of different editions of books, but here’s what I came away with. It appears to me that there are 141 books on the shelves, and of those 141 books, 32 books are spine-in (pages-out) or are pamphlets that have no identifiable markings on the spine. Of the 109 books that are identifiable, I was able to correctly identify 69. That also means that there were 40 that I was unable to identify. Of the 69 titles, 35 were books that were already catalogued and included in The Road to Interzone, and 34 are entirely new entries. I will also update all of the entries that were already known, as being photographed here in 1986. There were a handful of books I thought were highlights or stoppers too that I wanted to say something about, and then I promise I’ll get to the list. 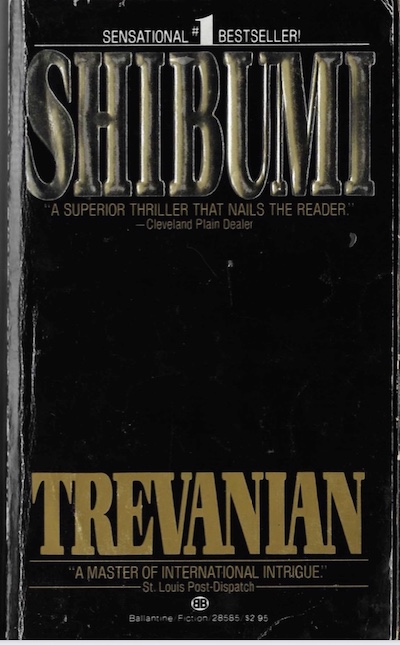 William Burroughs mentioned Shibumi by Trevanian in his 1980 Public Discourse Lecture, “It’s violently anti-American and it’s a bestseller, which is intriguing in itself. A very interesting book. I recommend it.” I found my copy of Shibumi next to most of Trevanian’s other books at a bookstore on Manchaca (pronounced “man check”) in Austin back in 2010 when I was transcribing the Naropa lectures looking for new additions for The Road to Interzone. It was my go-to store for paperbacks from the 70s and 80s; lots of former bestsellers, thrillers and horror books about killer ants, scorpions and rabid dogs, so it was almost always my first stop when I would discover a new entry. What got me thinking about Shibumi, was one of my latest discoveries, The Loo Sanction, which is also by Trevanian. Unfortunately, the bookstore I mentioned closed in 2013, but thanks to Burroughs’ interest in trashy bestsellers, that shouldn’t be a problem. I can just run over to the other paperback bookstore in Marble Falls that has the books that everyone read and disposed of thirty years ago too. Burroughs read a lot of bestsellers and what he called “airport reading,” so it wasn’t surprising to see a copy of Trevanian’s The Loo Sanction on his bookshelf in 1986. What was surprising was to see a photo of Burroughs’ bookshelf from 1986. 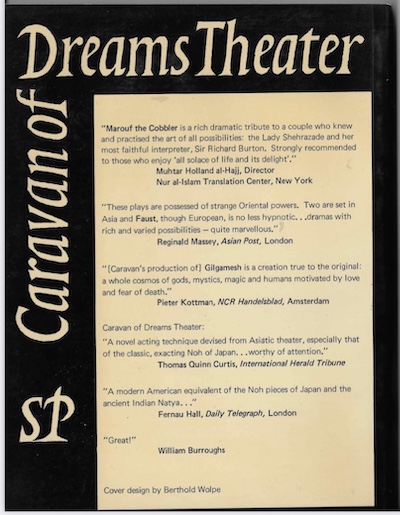 There’s a lot of overlap between this picture and the selection of the library catalogued in Road to Interzone, but even old familiar titles have new life when seen in a different context, and seeing the books as Burroughs shelved them is a real treat. Pride of Healers by Hirschborn is there and that’s interesting because Burroughs quotes from that book in the Caravan of Dreams reading he did on September 11, 1986 (Uncommon Quotes). It makes sense for it to be there, and if you look at the top book in the box on the floor next to the Explore magazine is something called Metal Woman. I can’t tell 100% and I can’t find it on the internet to confirm, but I’m positive it’s a program for the Johnny Dolphin play, Metal Woman. It has to be. Johnny Dolphin wrote a book of poetry called Wild, which Burroughs also had in his Lawrence library, and the play Metal Woman that I just mentioned was published in The Collected Works of the Caravan of Dreams Theater Vol. II (Synergetic Press, 1984). Another thing is Burroughs blurbed The Collected Works of the Caravan of Dreams Theater Vol. I (Synergetic Press, 1983), “Great!” (not as good as his blurb for The Erotic World of Peter De Rome: “gassy–a real rarity”). But that’s not all. A quick google search revealed that Johnny Dolphin is actually John P. Allen, and John P. Allen is one of the founders of Biosphere2. There’s a lot going on here, and that’s just in a box on the floor. 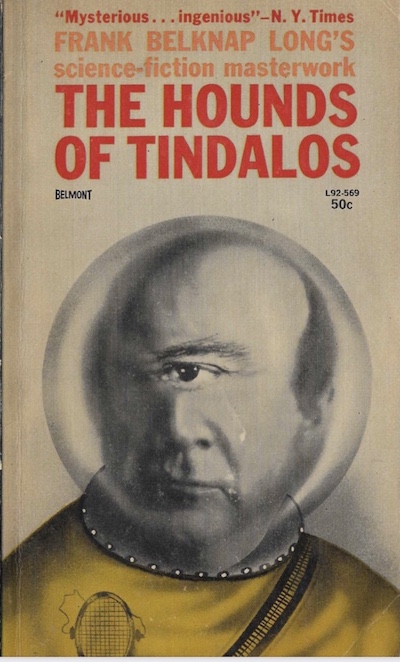 A title I’m already familiar with and have already catalogued is The Hounds of Tindalos, which was still in Burroughs’ library in Lawrence when he died. I have the Belmont edition, which I paid eight dollars for at Three Dog Books in Archer City, Texas back before I lived there. Burroughs had the 1975 Jove edition. He was probably familiar with the title story, before it was a book. The short story, “The Hounds of Tindalos” by Frank Belnap Long originally appeared in Weird Tales, and the creatures that appear in the story were appropriated by H. P. Lovecraft for his own story, “The Whisperer in the Darkness”, making Long’s story an official part of the Cthulhu Mythos. Burroughs stated several times that he read Weird Tales as a young man, and the magazine appears on Audrey Carson’s bookshelf in Cities of the Red Night, so Burroughs probably encountered this story as well as a fair share of Lovecraft from his days reading Weird Tales. The Necronomicon, though not directly written by Lovecraft, was of interest to Burroughs as well. He discussed the introduction he had written for the Barnes Graphics Ed. in his class on Creative Reading at Naropa. He mentioned Lovecraft once in that lecture. He also lists that same edition of The Necronomicon as a lesser-known great work in the Summer 1978, “Lesser Known Great Books: Reading List”, which Jeff Ball scored awhile back, and was generous enough to provide a copy. Burroughs’ involvement in the publication of the book was described in detail in Dead Names: The Dark History of the Necronomicon. There’s a Burroughs blurb on the paperback edition of the Simon Necronomicon too. Burroughs mentions Colin Wilson’s “The Return of the Lloigor” in a discussion reported by Matthew Levi Stevens and documented in the collection, Academy 23: “He likes Wilson, he says, jokes that ‘the Colonel’ with his cottage in Wales in Wilson’s ‘Return of the Lloigor’ and his own Colonel Sutton-Smith from “The Discipline of DE” are one and the same.” At the time of the writing of the Discipline of DE, the only available edition of that short story by Wilson was in the August Dereleth (Ed.) collection, Tales of the Cthulhu Mythos (1969). Burroughs’ own Wind Die You Die We Die was also reprinted in the The Starry Wisdom collection, an anthology of Lovecraft/Cthulhu inspired fiction (The Starry Wisdom: A Tribute to H. P. Lovecraft. D. M. Mitchell, Ed. Creation Books, 1995). Anyway, it’s not really a very big deal, but it is definitely interesting and Frank Belnap Long’s The Hounds of Tindalos is at home where it’s at. It belongs there like everything else. I’ve added this particular edition to my list of titles to update, so once I get it, if you’re interested in the Belmont edition, I’ll have one for sale.

The book I’m happiest to have identified is David Lindsey’s Heat from Another Sun, not because it particularly matters, but because I was able to make it out. It’s the one under the pistol there on the second shelf down. This was an unfamiliar title to me, so it’s exciting to add to the Road to Interzone Addendum, and I know it won’t be too hard to find. 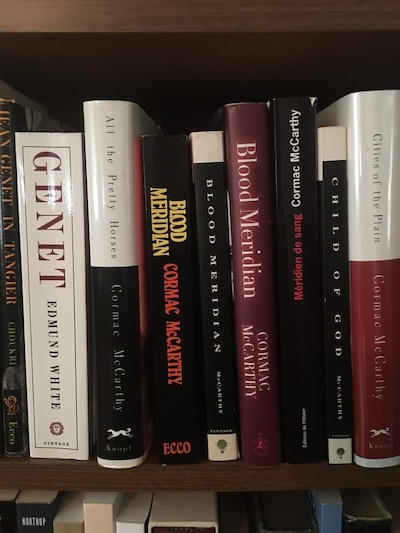 Probably the biggest ringer of all in this picture is the book on the top shelf under the T. E. D. Klein book. What I saw when I saw it was Blood Meridian. I said it can’t be Blood Meridian. It looked like a trade paper because you can see the Images of Horror and Fantasy underneath, and that is an oversize hardback. Uptight: The Velvet Underground Story is an oversize trade, and Skeletons and the Klein book are both mass markets. Blood Meridian looked like a trade, so I looked it up, but I couldn’t find a trade paper available in 1986. I asked my oldest son because his eyes are better than mine and he said yeah it for sure says Blood Meridian, so I called a trusted authority and asked him. He said that’s 100% Blood Meridian, but it doesn’t look like a hardcover. I thought about it for a little bit and remembered that the only person I know who refers to Cormac McCarthy as CMcC is Jeff Taylor in Nashville, so I wrote him and asked, “Isn’t this Blood Meridian, and he said, “I think it is… the Ecco pbk.” I tried “Ecco”, “1986”, and “mccarthy” in the keyword field on Bookfinder, and though it’s not as expensive as the first edition, it appears to be rarer because only three copies came up for sale. There was only one trade paper available in 1986 and this was it. It didn’t take long to confirm either, because Jeff Taylor sent me a picture of his shelf when he got home that night, and sure enough the spines are identical. This is all good news and bad news. I’m not as big of a fan of Blood Meridian as everyone I know, but I’m excited to see it in Burroughs’ library the year after it was released. It’s completely unexpected, but not a surprise. The bad news is I can’t find the Ecco edition for less than $700. Jeff Taylor said he paid nine bucks for it three years ago though so there’s hope. In the meantime, I’ve moved my old Vintage edition from my shelves over to Burroughs’ shelves.

I won’t keep you any longer from looking at the books. I’m grateful to the Burroughs community for helping me come up with these new entries. Here’s the list of what I was able to identify. Let me know if you can make out something I was unable to see.

From Chris Stein’s Point of View: Me, New York City, and the Punk Scene (NY: Rizzoli, 2018) (shelves with books from top to bottom–left to right). Road to Interzone (RTI) and Road to Interzone: Addendum (RTI-A) page numbers listed if title has been catalogued before.

Klein, T. E. D. Title unknown. NY: Bantam, unknown date. The author’s name can be made out as well as the logo for Bantam books and the title is obviously a mass-market paperback. There were only two books by T. E. D. Klein available in paperback from Bantam in 1986, Dark Gods and The Ceremonies, but I am unable to determine which title it is.

Cormac McCarthy. Blood Meridian or The Evening Redness in the West. Ecco Press, 1986.

Michael De-la-Noy. Denton Welch: The Making of a Writer. Viking, 1984.

Anton Chekhov. The Tales of Chekhov Volume 2: The Duel and Other Stories. The Ecco Press, 1984.

Jack Henry Abbott. In the Belly of the Beast: Letters from Prison. NY: Vintage, 1982.

Anton Chekhov. The Tales of Chekhov Volume 1: The Darling and Other Stories. The Ecco Press, 1984.

Books on the floor